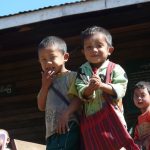 A bright future. Photo by A M Shein

BANGKOK, Aug 27 (IPS Asia-Pacific) – Busy shedding off its reputation as a recluse after decades of self-imposed isolation, Myanmar is playing catch-up with it neighbours and may well become a middle-income nation by 2030, the Asian Development Bank (AsDB) says in a report released this month.

According to the study titled ‘Myanmar in Transition: Opportunities and Challenges’, published on Aug. 20 by the Manila-based bank, Myanmar “can exploit its strengths, notably abundant natural and human resources … from its location at the heart of the world’s most dynamic region”.

This is the AsDB’s first major evaluation of Myanmar since the country’s political and economic reforms, which commenced in 2011. These reforms have included the release of political dissident Aung San Suu Kyi from house arrest, the easing of press censorship, and changes in state regulations of currency practices.

“The country has high potential for rapid growth and development given its rich natural resources, abundant labor force, and strategic location between the region’s two economic giants—the People’s Republic of China and India,” Changyong Rhee, chief economist in AsDB’s economics and research department, and Kunio Senga, director general in the Southeast Asia department, said in the foreword of the report.

The AsDB analysis looks into what the country’s strengths, weaknesses, opportunities and risks are, showing how Myanmar is transiting into a new age.

With its vast amount of natural resources, such as natural gas, water, forests, fisheries and petroleum oil, Myanmar has a lot with which to “take advantage of the global move from brown to green growth”.

Taking this development path would avoid further environmental degeneration and harm to the agricultural industry, which, according to the AsDB add up to 36 percent of output and 25 to 30 percent of exports by value.

Myanmar also has a large young population. According to the U. N. Economic and Social Commission for Asia and the Pacific (ESCAP), there are more than 13 million youths in the 15 – 29 age group actively contributing to increase productivity and competition.

However, at the moment, the AsDB notes that one in every four primary schoolchildren never make it to middle school, and almost 50 percent of all secondary school-age children are out of school or seriously lagging behind in enrollment.

Myanmar, whose entry into ASEAN in 1997 was marked with debate as to how it could encourage political change in the military-ruled country, is also starting to have a “strong commitment to reform”, the Bank said in its study. In 2011, there was also the initiation of a civilian-led government, a process that made headlines globally.

Additionally, new laws that “permit assembly, labour rights, and political participation” have also been passed in Myanmar, the Bank noted. This has resulted in an increased foreign investment and the easing of heavy international sanctions in place due to the country’s human rights record. For example, the European Union and United States have suspended their sanctions as a reward for Myanmar’s effort in opening up its economic and political scene.

However, even with its natural assets, Myanmar needs to work on the basic services and infrastructure it currently lacks. Across the board, the country is falling behind its regional neighbours – Malaysia, Philippines and Vietnam. According to World Bank Development Indicators 2012, only about 26 percent of Myanmar’s population had access to electricity in 2011, just slightly above that of Cambodia.

Myanmar’s education sector is especially worrying, particularly because of its youthful demographic, the report said. Still, it has made notable progress in recent years, with the gross primary completion rate reaching 103 percent in the schoolyear ending in 2010, according to the World Bank indicators. However, secondary and higher education will see obstacles in terms of quality and management, given the low government expenditure in education.

The reform process in Myanmar has already led to increased economic activity and opportunities.

Foreign direct investment (FDI) of nearly 20 billion U.S. dollars in 2011 alone far surpasses what Myanmar has been getting for the past 20 years.

But greater FDI flows also come with risks. According to the AsDB analysis, if Myanmar does not monitor and plan its monetary and fiscal management as it integrates into the global economy, it will soon face high inflation and exchange rate instability. (END/IPS Asia-Pacific)