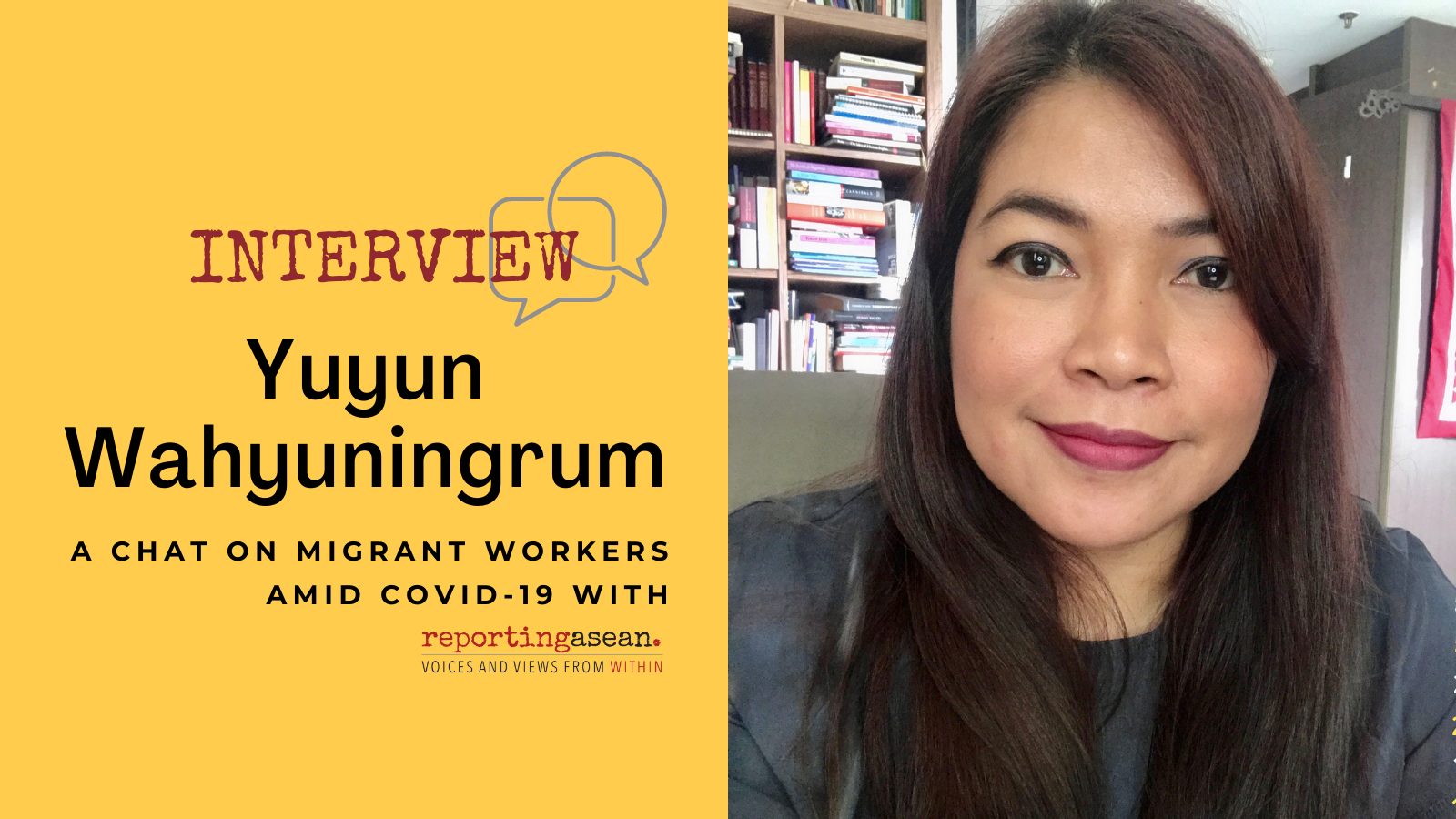 Home » Views and Points » Migrant Workers in ASEAN: ‘COVID-19 Brings Us Back to Zero’

“We don’t know why this has happened,” Yuyun Wahyuningrum, Indonesia’s representative to the ASEAN Inter-governmental Commission on Human Rights (AICHR) says, with a tinge of frustration . ‘This’ refers to suspicion and hostility and toward migrant workers that the chaos of COVID-19 has stirred up and thrown out into the open over the past year.

The frustration is such that many rights advocates in Southeast Asia, having campaigned for decades for a more empathetic understanding of migrant workers’ plight, are perplexed. They are trying to figure out “why it seems like after what we (advocates) have done, there seems to be no trust at all (in receiving societies)”, Yuyun said in this chat with Reporting ASEAN editor Johanna Son.

If a ‘reversal’ of perceptions took place among local communities, the same also happened for ASEAN governments – in the opposite way, says Yuyun, who has more than two decades’ experience in human rights work, both in civil society and in ASEAN-related mechanisms. Since COVID-19 does not go by people’s nationalities or immigration status, ASEAN has moving toward support for social protection for migrant labourers, she observes. A good start, Yuyun adds, is the mention of exploring “the portability of social security among migrant workers” in ASEAN countries in ASEAN’s implementation plan for its COVID-19 recovery framework.

Before COVID-19, United Nations figures put the number of intra-ASEAN migrant workers, most of them unskilled, at 6.8 million in a region of some 650 million people. Before the pandemic pushed hundreds of thousands to return home, the Philippines and Vietnam ranked among the top 10 countries in the world that receive the most overseas remittances. In ASEAN’s labour-receiving countries, migrant workers are estimated to account from 11 to 37 percent of total workers.

Johanna: COVID-19 has been around for over a year. What lessons have we in ASEAN learned about the migrant workers in our midst?

Yuyun: COVID-19 gives the region a new understanding about the link between public health and migration. I said this because in the ASEAN Comprehensive Recovery Framework, the language was “portable social security” for migrant workers. There have been disagreements among member states over who will pay the – whether it’s the receiving countries, not the government, but is it the employer, or the companies, the agents or the migrant workers themselves?

Some migrant workers have social security, but can only use them in the country. That has actually opened up the fact that there is no cooperation among the private sector in terms of ensuring the health care of migrant workers, a lack of regulation that would allow insurance companies to be able to work cross-border.

What’s the weight of this inclusion in the ASEAN document? ASEAN has not exactly been fast in addressing migrant work over the decades.

Yuyun: I did not expect that anything will dramatically happen. But knowing that this issue has been discussed for years in the ASEAN Committee on Migrant Workers, its inclusion in the (recovery framework) actually opens up possibilities. It means that maybe in the next 10 years, migrant workers will be able to migrate, but (have) better preparation in terms of policies to ensure that their health care will be taken care of in the country of origin and in the country of destination.

How has COVID-19 been a wakeup call, if an uncomfortable one, for ASEAN states?

Yuyun: Despite the fact that many migrant workers had been discriminated (against), and then stigmatized, being (seen as) virus carriers, I sense there is a change, a shift of understanding. Before COVID-19, governments and policymakers have a negative perspective about migrant workers. I attended a couple of meetings (of the ASEAN Forum on Migrant Labour) years ago, and I continued to hear how companies, agents look down on migrant workers, and how governments from destination countries have this kind of discourse of ‘we provide you with opportunity’. It’s like benevolence, generosity, while the people on the ground, mainly civil society and others, have sympathy to migrant workers.

How did COVID-19 affect this equation?

Is it accepted in ASEAN that migrant workers have rights that do not disappear when they go elsewhere?

Yuyun: The fact that it is mentioned in the ASEAN Comprehensive Recovery Framework, that’s already an acceptance of the fact that migrant workers have rights, have their human rights to health.

What’s an example of how the pandemic opened governments’ eyes?

Yuyun: The situation in Singapore, for instance – whether or not you are migrant worker or not, you got infected. Governments cannot discriminate their measures based on immigration status. That’s something that the region learned a lot from this pandemic. It has pushed the policymakers to accept that to be able to get away from it, we have to protect everyone. But by doing that, we need to recognise that migrant workers have rights to health especially, and now they have they have to think about it and plan, and it is going to be difficult.

I think the debate whether migrant workers have rights is done. Now it’s time for how to operationalize, how to realise, how to materialise the right to health of migrant workers.

What is it with COVID-19 that it pushed up negative views of migrant workers, including in destination countries such as Malaysia or Thailand?

Yuyun: Some people said maybe the characteristic of COVID-19 is that it creates ‘otherness’ because it’s coming from outside of our country, and it spread out very quickly. So we hate those who are not coming from our (societies), based on citizenship, on immigration (status), despite the fact they have been living in our countries for years and therefore they do not deserve all facilities, services provided by government. Some governments call it COVID nationalism.

Malaysia, Singapore, Thailand actually cannot function well without migrant workers, so shouldn’t this at least be a matter of enlightened self-interest?

Yuyun: This COVID-19 actually brings us (back) to zero. It seems like what we have done in terms of raising awareness for years (is) just. . .  nothing. Some civil society organisations are also trying to understand why it seems like (after) what we have done before, it seems there is no trust at all, no result at all. We actually do not know why this has happened. It’s like the changing of attitudes that we’ve (seen) in the past sounds very artificial. We thought we succeeded, but apparently no!

Is it because COVID-19 has brought out a lot of fear-based behaviour?

Yuyun: COVID-19, I think, is only a trigger, but deep down there is discrimination. People perceive those who migrate for economic (reasons) as poor people and therefore, poor people can be discriminated (against), poor people become the burden of both sending and receiving countries, and so on. Majority of migrant workers are coming from poor families, but they want to work. Society does not appreciate this kind of eagerness to work, ability to survive, but rather looks at the background of them being poor, being non educated, some people call (them) lazy, stupid, and so on. But these people do not want to beg in the streets – these people want work.

Can there be effective portable social security without people accepting the migrant workers in their societies?

Yuyun: I’m not sure. First, even though ASEAN has taken up the portable social security in higher level in more serious discussions, it does not, in my experience, say anything about the acceptance of ASEAN member states. In my experience in AICHR, even though an intergovernmental commission on human rights has been established, it doesn’t mean that all member states want to engage with human rights. Putting this idea in the official document (recovery plan) is already a victory. The next step is how to negotiate.

Yes, they’d have to sell it to their publics, and that might be harder?

Yuyun: In the operational phase, it has (to involve) another struggle with society, with the companies. The companies will check whether they get benefit from it. If not, (they would think) ‘why do we have to participate?’ A company is about profit, it is not a humanitarian organisation.

Read this article in Thai.