BANGKOK, May 2 (Reporting ASEAN) – Say ‘Mekong River’ and usually, it’s the Mekong River Commission or perhaps some Greater Mekong Subregion forum or the ASEAN-Mekong Basin Development Cooperation. But not any longer, since China introduced a new kid on the Mekong block – the Lancang-Mekong Cooperation (LMC) mechanism.

Boring as its name might be, big are its implications for water politics, water governance, ASEAN-China relations – and for dividing ASEAN member states and undermining ASEAN centrality.

In effect, the LMC is China’s version of a Mekong Summit, one that has seized the space from the majority of the Mekong countries that are also ASEAN member states. 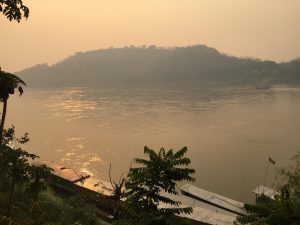 The calm at dusk by the Mekong River in Laos’ Luang Prabang belies the politics that swirls around Southeast Asia’s longest river. Photo: Johanna Son

China has thus created its own mechanism for Mekong water governance, taking advantage of a vacuum left by a weak international governance structure such as the Mekong River Commission, the absence of a forum where all six countries through which the Mekong River flows are members – and not much success by lower Mekong states in using venues as such as ASEAN to engage on Mekong matters.

Building on its policy of being a “friendly neighbour” to its South-east Asian neighbours, China saw a gaping hole and stepped in, as it has done in other regional tension points, such as the South China Sea.

Launched in 2015, LMC has moved slowly but steadily. The countries of Laos, Myanmar, Thailand, Cambodia, Vietnam cannot ignore it and some don’t want to. In March 2016, the First LMC Leaders’ Meeting was held in Sanya, China, against the backdrop of what several ASEAN countries see as China’s worrisome behaviour in the South China Sea and the worst drought in decades. Thailand was a co-host of the leaders’ meeting.

In the nineties and in the years after, complaints peaked about China’s dam construction, without consultation, in the upper reaches of the Mekong, called the Lancang, and worries that it would control water levels downstream. Reports of China as regional bully dominated media reports, and even fishermen in northern Thailand blamed China for low water levels in their part of the Mekong River. Today, the dams are in place and what was a scenario at the time has become reality: China is a determining factor in the Mekong’s water levels downstream.

Several reports have relayed conflicted sentiments from downstream countries about having to ask China to release more water, and China saying this is exactly the kind of gift the upstream dams are meant to give. Thailand and Cambodia have thanked China for its water releases.

On the geopolitical side, China’s messages stemming from its LMC policy seek to press all the right buttons – but its footprint in vital aspects of development in Southeast Asia is clearly growing larger, with growing impacts on everyday-life issues like water and resources.

These messages present the LMC as complementary to other regional venues dealing with the Mekong River, especially to the MRC, where China and Myanmar are just dialogue partners. China has also made it a point to package LMC’s focus areas as exactly the same three pillars of the ASEAN Community, so it is seen a friendly partner.

But LMC may also have the potential for driving a wedge in this community. China is trying to woo the newer members of ASEAN – Cambodia, Laos, Myanmar and Vietnam – by saying LMC will address development gaps within the region – even if this is ASEAN’s own priority programme and China is not part of ASEAN.

China is in effect telling these countries, some of which are grappling with the commitments under the ASEAN Community, that they may find better refuge in China’s arms, rather than in its own association’s – ASEAN’s. Yet ASEAN’s firm goal is to maintain its centrality, which hinges on all 10 member states being clear that adherence to/investment in/reliance on ASEAN is their foundation for staying neutral and maintaining ASEAN’s muscle as an organisation that when acting together, is much stronger than any individual nation on its own.

It is important to remember that ASEAN is already being courted by different external players such as the United States, China and even Russia.

In sum, China’s initiatives like the LMC cannot be seen in isolation from the bigger strategic picture in Southeast Asia, especially if mechanisms like the LMC divide ASEAN members.

Cambodia is the most China-friendly country in ASEAN. In 2012 when Cambodia was ASEAN chair, ASEAN failed, for the first time in its history, to issue a joint declaration because Cambodia opposed the inclusion of concerns about China’s behaviour in the South China Sea in it. Since then and until 2015, ASEAN’s declarations have used stronger language in expressing concern about China’s actions.

In 2015, Cambodian Prime Minister Hun Sen was quoted as saying that the South China Sea “is not an issue for ASEAN as a whole”.

Yet China is far from other ASEAN members’ favourite country at present.

Unlike Cambodia, the Philippines and Vietnam are both pressing for the regionalisation of the South China Sea matter. The Philippines is awaiting an impending decision on the lawsuit it brought to the international tribunal in The Hague against China’s building of structures in the South China Sea. Vietnam is hoping to use alliances with neighbours to hold China off.

While agreeing to some ASEAN initiatives on the South China Sea, including its code of conduct in the area, China has also stood firm on its refusal to discuss the disputes as a regional matter and insists on a bilateral approach with other claimants. 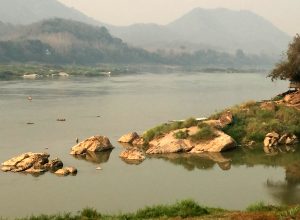 The strategic value of the LMC, some will argue, is that there is a now a venue where all six Mekong countries are full members and can talk to one another.

Indeed so, but LMC is far from a level playing field or a neutral venue for dialogue. It is led and organised by the upstream Mekong power, one whose decisions are linked to the state of the river in the lower-basin countries for whom the Mekong is nothing less than a lifeline.

The LMC’s successful emergence is also a lost opportunity for ASEAN, home to all of the Mekong riverine countries except China, but not quite able to become relevant for its members on this matter.

ASEAN is understandably proud of several mechanisms it has doggedly developed over the decades to prevent an escalation of tensions in the South China Sea. It adds another feather to its cap in 2017, when it turns 50. But the Mekong example provides little encouragement of ASEAN crafting a working regional mechanism, one that is friendlier to, safer and more neutral for smaller states.

It is thus of little surprise that some member states are looking beyond ASEAN, to other external players, for recourse, to hold in check China’s behaviour in the South China Sea.

This, however, comes with the risk of faultlines opening in ASEAN, soon after it launched the ASEAN Community at the end of 2015. It also threatens to undercut the consensus-based framework ASEAN has survived on so far – and the goal of maintaining ASEAN centrality that ASEAN leaders have made top priority to ensure the organisation’s strategic value in and beyond Southeast Asia.

*Johanna Son is a Bangkok-based journalist and editor who has covered regional affairs for two decades. She is editor of the ‘Reporting ASEAN’ series and coordinates the Reporting ASEAN programme. She has also co-run a media fellowship for Mekong journalists, called ‘Imaging the Mekong’.

Read excerpts from China’s Yang Yi at the April discussion on ‘‘The Lancang-Mekong Cooperation: Challenges, Opportunities and Ways Forward’ in Bangkok, Thailand: https://www.reportingasean.net/china-lancangmekong-share-water-share-river/