Pitch us a story idea we can’t resist, and we’ll support it. Deadline for the first round of applications: 31 October 2016.

Calls for applications are here.

Tips for developing a story for Reporting ASEAN are here.

ASEAN turns 50 in 2017, marking this key anniversary as a strategic venue for international relations and diplomacy in Southeast Asia and beyond.
It is a time to look back at how far it has come from the Cold War days of the sixties, to take stock of its status as a fulcrum of stability and security in this part of the world today – and to look ahead into ASEAN’s prospects as an integrated community that tries to balance regionalism with national sovereignty. 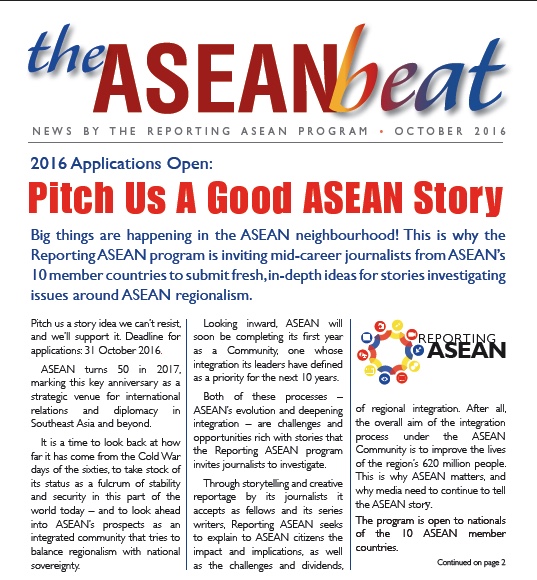 Looking inward, ASEAN will soon be completing its first year as a Community, one whose integration its leaders have defined as a priority for the next 10 years.
Both of these processes – ASEAN’s evolution and deepening integration – are challenges and opportunities rich with stories that the Reporting ASEAN program invites journalists to investigate.

Through storytelling and creative reportage by its journalists it accepts as fellows and its series writers, Reporting ASEAN seeks to explain to ASEAN citizens the impact and implications, as well as the challenges and dividends, of regional integration. After all, the overall aim of the integration process under the ASEAN Community is to improve the lives of the region’s 620 million people. This is why ASEAN matters, and why media need to continue to tell the ASEAN story.

Applicants to the Reporting ASEAN media fellowship program 2016 must be:

The selected Reporting ASEAN fellows will get coverage subgrants to carry out reportage of their approved story topics over a period of two months (during which they continue their regular work duties), and a scholarship to take part in the Reporting ASEAN media forum 2016.

Reporting ASEAN is looking for story proposals that focus on, but are not limited to:
• analysis of the progress of the ASEAN Community and ASEAN integration;
• relevance/impact and public awareness of ASEAN and a specific aspect of its work;
• cross-border connectivity;
• ASEAN migrant labor issues
• media coverage of ASEAN issues
• stimulation of sustainable growth and development, including the challenges of integration on health
• gender equality and empowerment of women and girls;
• climate change and environmental sustainability;
• regional stability and security;
• peaceful pluralism, respect for diversity and human rights

Story proposals will be screened using these core elements: originality, creativity, relevance to the overall development of ASEAN societies; the presence of a strong regional angle that goes beyond local/national reporting; a deep understanding of ASEAN and the ASEAN Community; the ability to translate policy into everyday issues with a human face; effective story framing and news angling; inclusion of a variety of sources beyond state voices.

Print fellows are to produce a package of stories, totalling at least 2,500 words, to be published in their media outlets. Photojournalists are to produce photo essays composed of 15 quality photos selected from the shots they take, with text of up to 800 words. They may write in their local languages.

Broadcast journalist-fellows, from radio or television, are to produce a story or feature (minimum of 3, maximum of 15 minutes) to be aired in their media outlets. Video reports may be submitted in a local language, but must be subtitled in English. Radio reports must be accompanied with translated versions.

Reporting ASEAN is hosted by Probe Media Foundation Inc, Its second phase (2016) is supported by an ASEAN-Canada project, funded by the Government of Canada. It is also in partnership with Air Asia, through collaboration with the ASEAN Foundation. The program started in 2014 with founding support by the Rockefeller Foundation as well as the ASEAN Foundation through the Japan-ASEAN Solidarity Fund.

Probe Media Foundation Inc is committed to improving the quality of media in the Philippines and Asia through the training of professional journalists in the creation of responsible media outputs that contribute to development.

Application and story proposal forms are available at http://bit/ly/reportingaseanmediafellowship or at www.reportingasean.net/media fellowship 2016. Submissions can be emailed to reportingasean@gmail.com. Applicants are to submit:
• Application and Story Proposal Form for Reporting ASEAN 2016
• For print journalists, clippings of three published and bylined articles
• For photojournalists, clippings showing a portfolio of eight published photographs
• For broadcast journalists (radio or TV), copies of two aired segments they produced (written, directed, shot or edited) and links to Youtube or Vimeo etc.