Staging a single, combined performance with artists from various ASEAN countries is a tall order, but that’s exactly what the ASEAN Puppets Exchange Programme (APEX) is working on ‘behind the curtains’. So, while puppetry is an old art form in Southeast Asia, it is also becoming a new channel for bringing together different puppetry troupes, traditions and styles to discover an ASEAN identity by creating and telling a common story.

Puppetry artists from the 10 ASEAN countries have been brainstorming on this joint story they want to tell. The plan? To stage this performance at the ASEAN Summit in Vientiane, Lao PDR in September 2016.

Coordinated by Singapore-based Artsolute Ltd and with the support of the ASEAN Foundation, APEX is among the initiatives that strengthen the people-to-people links on the ‘soft’ side of ASEAN Community-building – away from, but no less real than the ‘ASEAN Community’ that can sound so formal and be about nation-states rather than peoples. Over coffee during a heavy downpour in Singapore, Reporting ASEAN’s Johanna Son sat down with Artsolute’s Terence Tan to discuss the creative, cultural energies that infuse this puppetry project. 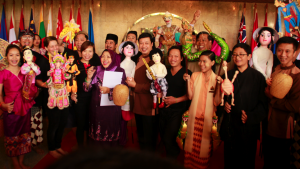 The puppeteers perform at the ASEAN Secretariat.           Photo: Artsolute

Q: How has been it like working with artists from different countries, cultures, languages, styles?

Tan: Have to really, really listen; have to really open up a lot my empathy, because our languages and our cultures are so different. It’s not just English. . . I have to understand the context very much. One very funny incident that happened in Malaysia – we were in a room and we were using different terms for the thumb drive. ‘Oh, does anybody have flash? USB? Thumb drive?’ Then we realized that USB is thumb drive is flash drive across the different countries. You have to let go of whatever you know and appreciate everything from the start. The other thing is I have to be very neutral.

Q: You mean there are no leaders?

Tan: Yes, I have to operate really more as a facilitator, not just because it’s the ASEAN way or anything like that; it’s a very practical thing. Everyone here is a director or a leader in their own right so I’m working with 10 different leaders. Everyone has their own ego, their own history, their own profession, their own specialization and they’ve never met and worked with each other before. So they would have never understood the other person’s way of doing things before. And these are not young children or teenagers. As much as they are willing to listen and to learn, they have also been doing this for 40 years, maybe handed down from their parents or generations before, for many years before…

I have to be the facilitator to give everyone the space to explore, the opportunity to present and ask that everyone also pay attention and listen and respect each other’s ideas, and I have to remind people that historically, this has never ever happened before. So at least when we know that we are in completely new territory, it helps them appreciate the conflicts and the differences.

Q: That sounds a bit like your definition of the ‘ASEAN Way’ from the cultural perspective?

A: It’s ASEAN as a political entity that has allowed for this process, so we are where are now because of ASEAN. Then I look back at that, I think about how ASEAN started, what is ASEAN to me as a Singaporean, as a Malaysian, Burmese or a Bruneian. . . It means something different for everybody. The Lao people believe in ASEAN so much because they need it; they need a region to help them. Education, or something, has taught them about ASEAN much more than in Singapore or Malaysia.

But nevertheless, the ASEAN way is an important one because we are different, we are very different – we are separated by the Mekong River, we are separated by the rivers and the straits and around us, the mountains and all that. We have very different dialects. Yet we are in close proximity. It’s really the 21st century – FB and social media and flights, budget air travel and trade that really got us together. We’re now realizing that we have neighbours and we have to talk to them.

Q: So, culturally, you do see one ASEAN?

Tan: Well I think it’s possible, but it’s the cultural ambassadors and the cultural leaders who will lead the way, really. There is only an ASEAN culture only if the cultural artists (do that) – I would say cultural ambassadors because we don’t necessarily have the best of the best artists, but we have the more patient ones, the ones who are more ready to learn, listen and think about ASEAN. As a group, it remains to be seen whether some of the first few members can stick throughout – time will tell who can stay and who can’t, who has stamina and the resources, or who wants to be key managers and facilitators. . .  it’s an organic process. Nobody can predict what’s going to happen in the next five yrs.

But the point is there can only be an ASEAN culture if these cultural leaders come together and then spread it out in their communities and their societies. 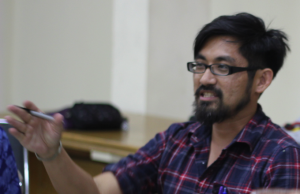 Q: But by ASEAN culture, we don’t mean something that’s the same for everybody by any means?

Tan: That’s not something I can say until we have the more complete picture of what we want. Are there 10 different ways to see ASEAN and yet at the same time be the same? Or is it possible to have one collective ASEAN way? I’m not sure.

Q: So now the artists are doing different things together and learning by exposure and interaction, but you were talking about the next step being to do a common performance. Tell me about that – and how has it been so far. And what’s this ASEAN story shaping up to be?

A: To show the diversity of ASEAN, the challenge is actually not so much our cultural difference or language differences. Actually, it’s not. The challenge really really is the fact that we have people who are more community-based, people who are more commercial based and some who, how to say, are more ‘politically based’ – but I don’t think so (actually), it’s just a matter of whether it’s people who think ahead, and forward, and with the big picture, as opposed to those who have to deal with basic day to day, community needs.

So the fact that someone from Singapore, from Myanmar, that we come together, we bond together – sometimes better than our friends in Singapore, or in Myanmar – prove that it’s kind of a link between us. But I guess we come together because of one common thing —  we have a common interest of puppetry and we wanting to tell stories. It’s really the human imagination that puppetry requires of us, that helps us come together. I think that’s why it’s a very, very good art form to bring ASEAN together.

Q: You were talking about how puppetry is so Southeast Asian, adapting to how our lives, or even our weather.

Tan: I think puppetry was formed because of the environment. How in Southeast Asia, it’s little too hot in the day and everyone really starts to wake up and do things at night. And the best way of storytelling is to use fire, the skins and to start telling stories with the light and the screens and the shadows. That’s why ‘wayang kulit’ lasts all night. And in the daytime, people sleep and the entertainment is at night. Or in Vietnam, it’s after the rains, after the celebrations and waiting for the harvest and you’ve got all the water and everything around you and then they work with telling the stories from under the water. . . So it works very well with our own cultures.

It’s not like Greece where it’s about telling stories in the bright daylight or in a big theatre and it’s dry, and you can build things. Here it’s monsoonal, it’s wet, it moves, it changes, you have to bring our stories with you. So it still applies today where in Cambodia or Vietnam, or Laos, in the villages they bring this huge little story and they bring them around to the different villages. So one man can tell so much.

Q: What’s the story line of the performance APEX aims to do at the ASEAN Summit in Laos?

Tan: The stories between the cities and the country, rural places and villages – the only one way to really bring it together seems to be through a new central character. Maybe this character will represent the new voice for the 21st century, or maybe what the young ASEAN (citizen) is going through right now – with all the heritage, all the environmental changes and advances that’s happening around him or her. That central young hero basically should experience all that ASEAN also has to offer.  This way, every culture, old and new, has a chance to shine in this story.

(From our brainstorming), the environment is a main issue, human trafficking, the ever-softening borders that’s happening around us. The big picture is the environmental changes. Most of us are water based and so many people are dependent on the Mekong River to some extent. Water is a very important part of us. Some of us may be getting floods, some of us may be getting too little soon – that’s something to talk about ­–­ but I can’t give u a full picture right now (with the consultations continuing).

Q: What creative preparation has been underway so far?

Tan: The way the puppeteers in Southeast Asia work is – the music needs to come first, so one of the first steps is to bring together the musicians. For now we’re going to try with the musicians of Myanmar, Singapore, Malaysia, Indonesia, a few of the more drum-based (troupes) – Cambodia as well. Just so that we have the baseline, so that everyone can start working with their different dances, so the beat base of the dance and maybe we can even mix in in a bit of contemporary, hip-hop. . . .That can spill in, if we want to try it. That should be where some of the dances come in. Then after that, the strings and the wind instruments from Laos, from Myanmar. The pipes, the wind instruments will give the higher notes and the motifs, a sense of the earth and a sense of the sky, and then after that, the people in between the dances.

Q: Has anything like this ever been done before?

Tan: Not that I know of. I know that coming together as an ASEAN culture has been done before, musically. But I don’t think it’s been done before in terms of a theatrical, singular narrative. I think there has been the narrative of Southeast Asia as a region and its historicity, but not so much as different cultures together. And it’s misleading to say 10 cultures because there’s about a thousand cultures in Indonesia alone and couple of hundreds in Myanmar! We’re trying to bring in the various representatives. Laos has so much that we haven’t even seen.

So it’s also about bringing in artists who know the variety in their own cultures, so they can represent not just one single type – not just the Burmese but various other ethnic groups in Myanmar, likewise Java, likewise Laos, likewise Singapore.