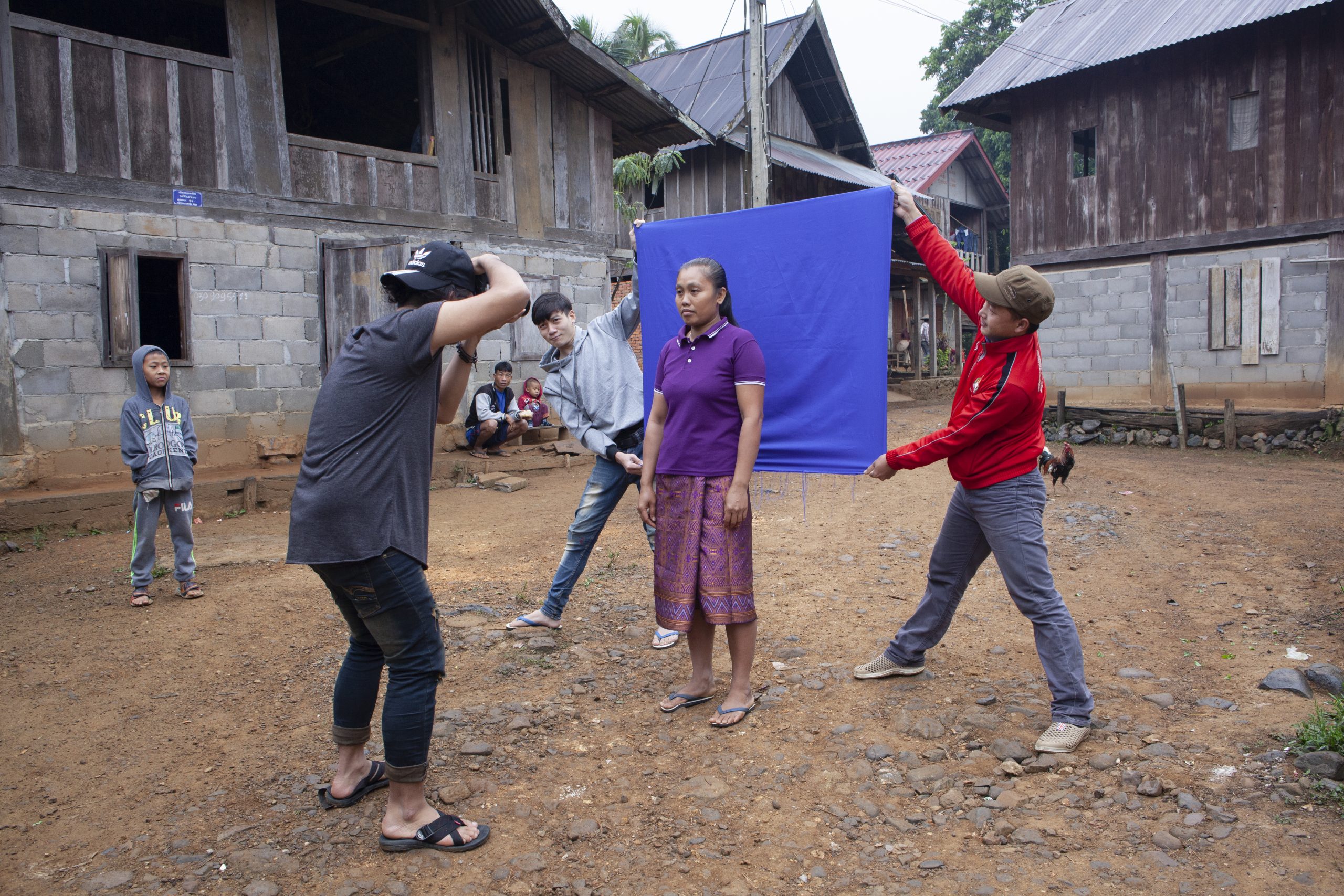 Home » Features » Laos: To See And Be Seen

Click here to see this photo essay on a web page, or view below.

What started out as a hands-on photography trip for visual storytellers in Laos has become a window into the importance of seeing, and being seen, through the camera. For the third year, a group of photographers – which typically include students or people who love taking photos – went on a road trip to remote communities that led not only to discoveries about the individual lives of the people they met, but about their own lives as well.

In late January 2021, 10 photographers organized by a small video production house called ‘MALAO Studios’ headed out in mini-vans from Luang Prabang city in northern Laos to three villages in Phonxay district, in Luang Prabang province. They travelled for three hours to the first village (and for about an hour’s travel between villages) through unpaved, bumpy, narrow roads to places where electricity is not always available – and where the smartphone is still a luxury.

Much like traveling caravans, with equipment ranging from projector screens to a power generator, the photographers’ visits are treats for the locals who get to have their photos taken, perhaps get to learn how to photos themselves, and watch a few films too. Some have not done any of these before. Their reaction to being photographed? Smiles and laughter.

The immersion experience is one that MALAO Studios’ founder Ka Xiong, a photographer and filmmaker, hopes can show younger creatives – often a mix of ethnicities such as Hmong, Lao, Khmu – the richness of engaging with, and respecting, people before pressing that shutter button, says Xaisongkham Induangchanthy, a documentary filmmaker/storyteller who has travelled with the group for the past three years.

Instead of meeting photographers in classroom settings, participants get to interact with people far beyond their being ‘subjects’ in front of the camera, says Xaisongkham, a co-founder of Lao New Wave Cinema whose work has included ‘A Long Way Home’ (2018) and is working on his debut feature film, ‘Raising A Beast’.

In this conversation with Reporting ASEAN’s Johanna Son, Xaisongkham explains that the group could not just come in to ‘take’ but needs to ‘give’ something back. “We don’t want to just take villagers’ photos and leave. We want to give them something back as a token of appreciation,” Xaisongkham explains. The least we could do is to take their photos and print them out for them.”

We asked him to select for us a set of photos that the MALAO group took during this year’s trip to the villages of Phatoub, Longkong and Longnged. They are also pictures that share with us aspects of Laos not always familiar to visitors.

Johanna: How do you choose where to go?

Xaisongkham: We choose villages that are quite different from each other – different ethnicities, cultures, activities, living conditions, to provide something interesting for participants to take photos. We also choose villages that are remote. Some villages don’t even have access to electricity (not to mention the internet). People who live in remote areas don’t have a chance to even have their ID photo. We want to take a photo for them to use for a family registration book or student ID. We also want to take their family portrait for them to keep.

What is a visit to a community like, and how do you discuss with them why you have come?

In each village, we will brief them (the photographers) how they should approach villagers (talk to them, introduce ourselves, hear their stories, and ask for permission before taking their photo), respect people,  their place and their culture….

While photographers wander around the village, villagers can come and have their ID photo taken. We also offer to take their individual portrait or with their friends and families. If they have old photos that they want to scan/repair/retouch, enlarge, and print, we can do that for them as well.

Then, in the evening, we invite them to come for a screening of movies and their photos.

All of these are free of charge. After the screening and villagers have gone home, then we gather to give feedback to participants about their photos (they pick the best photos they have taken that day for everyone to comment).

Do you also print out photos too after you take them?

We print out photos for villagers. It can be ID photo that they can use for a family registration book or student ID, individual or family portraits that we take on the spot, or their old photos (that we scan/repair/retouch)

What gear do you bring with you on the trip to more remote areas?

Each participant has to bring his/her own camera and computer laptop. We (administration team) bring cameras, computers, printers, blue cloth, stands, a projector, a screen, a loud speaker…. (to take photos, print, screen….). We also bring a generator to use in a village where this is no electricity.

For the past three years, we only organized the activities in Luang Prabang. In the future, we may visit other provinces.

Which picture among the many you take on the last trip strikes you the most, and why?

Every photo brought to us for repair and enlargement is meaningful (to an owner) and very heart-warming for us (sometimes, heartbreaking). What surprises me the most is oftentimes photos involve death – a photo of a dead person; people have lost someone (their son, daughter, father, mother, lover). So they want the photo of their loved one to be repaired or enlarged. Some people want their photos taken so that when they die, they will have their photo display on their coffin or for their family members to remember them by.

One of the photos that I remember the most is this one (above). A woman came to our station and showed this photo to us. She asked if we could help repair it. She told us that it was the photo of her and her then boyfriend. At some point in their relationship, she was so mad at him that she tore this photo apart. But the photo was too dear to her to throw away. She kept it for so many years. Now she has two kids with the man in the photo. It warmed our heart by how much this woman treasured the photo. Looking at her happy smile after seeing the photo repaired really made us smile too.

To me, the photos show the importance of ‘being seen’, whether by having them taken or even by the film showings you do. How important is being ‘seen’ for the people you met?

Hard question to answer. Lots of people rarely have a chance to be photographed. When we offer to take their photos, they usually want to look their best; they will dress up in their traditional clothes, which wear on special occasions like weddings or New Year only).

And when we print out their photos or show them on a camera, and project them on a big screen, the reaction we receive is always the same – their smile. I guess by us being there, interested to hear their story and to photograph them, they may feel that they matter too.

Are people usually okay to having their photos taken? Do you have to explain a lot?

Most of the time, people are willing to let us take their photos (in the case of photographers going around the village). At our station, people come and ask us to take photos for them. Sometimes, they come alone or bring their friends and family members with them.

Every time we take a photo of them, they will ask to see. ‘Smile and laugh’ is a usual reaction we get. Then there are some villagers who are reluctant at first. They are afraid that we will ask money from them in return. . . .So, we have to explain to them why we are there.

What films do you show and how do you select what to show?

We screen comedy films and the photos that photographers have taken. Villagers, especially women and kids, seem to enjoy the screening a lot. They will come early and stay until we finish. They smile and laugh at the film and photos (of themselves and their fellow villagers). Many villages we have visited don’t have access to television or many forms of entertainment. Sitting together and watching a movie and themselves on a big screen is quite a treat for them.

Films that we pick are comedy – Charlie Chaplin, for instance, and some Lao short films without or very few dialogue. It is easier for audience to enjoy since many of them hardly understand Lao (not to mention other foreign languages). For the photos, we want them to see themselves on a big screen.

These days, taking a photo is a normal, or even small routine thing, given the smartphone and social media especially in big cities. But what do photos mean for the communities you visited?

Photos can be useful for villagers such as photos for their family registration books. It’s hard and costly for people in remote areas to have their photos taken.

Photos are memories that are frozen in time; something that people can print, frame, hang on the wall or hold on to. If we can take photos anytime, anywhere, and of anything, then we bury countless photos in memory cards or hard disks that we hardly view them again, then we take things for granted. But for villagers who usually only have their photos taken on very special occasions such as wedding, New Year celebrations or with loved ones, then every photo is a piece of memory that they treasure.

In our last trip, there was a couple, dressed nicely, approaching us. They were about to get married in a couple of days but didn’t have any pre-wedding photos (they couldn’t afford them). So, we offered to take their photos as a wedding gift. They were very happy.

Things will be different once people own a smartphone and have access to the Internet, I reckon. Going around to take photos for people may be irrelevant or unnecessary then.

What have your biggest discoveries, (or rediscoveries) about Laos been in doing these trips, especially from the eye of a documentary maker?

I’ve been living in a city (Vientiane) for so long and have become used to doing things independently. Not knowing your next-door neighbours or interacting with them is normal (or even expected – to mind your own business). But when we are in the village, we are so welcomed by people. Everyone seems to know each other. They are willing to feed us and let us sleep in their house. This makes me realize that I once used to live like this in my village too. In a big city, I feel like we have lost that sense of close community.

(*This feature is part of Reporting ASEAN’s ‘Lens Southeast Asia’ series, which is supported by the Japan Foreign Press Center-Sasakawa Peace Foundation.)