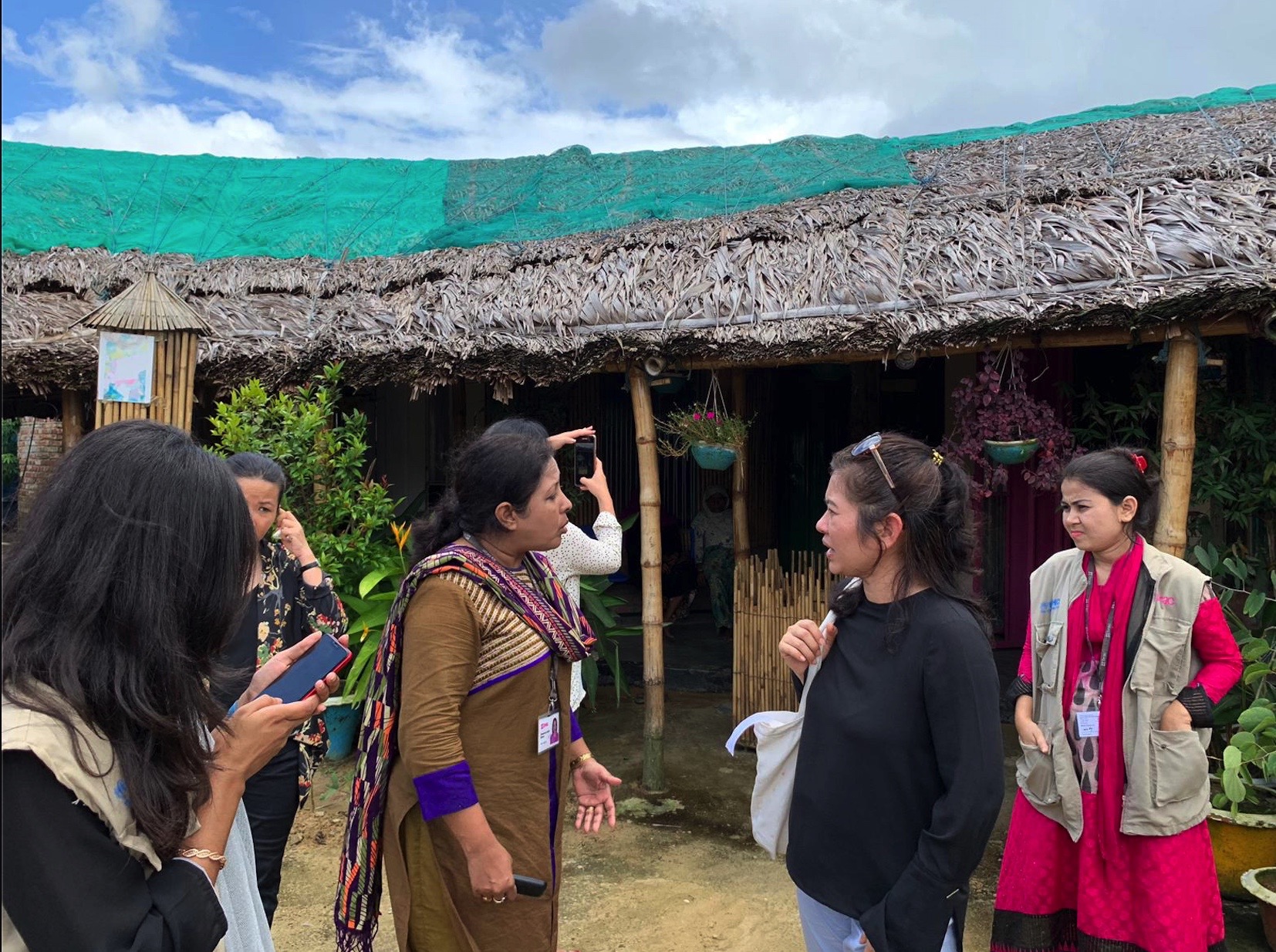 Home » Views and Points » From Laos to Bangladesh: Notes from A Rohingya Refugee Camp

After flying in by small plane from Dhaka, the capital of Bangladesh, I arrived in Cox’s Bazar along the country’s southern coast, a city that is home to the world’s longest beach – as well as the world’s largest refugee camp.

For a person who has grown up in, and lives in Laos, a small landlocked country with about 7 million people, experiencing the sheer mass of humanity in Bangladesh was nothing short of mind-boggling. A visit to this densely populated South Asian country of more than 160 million people was, by itself, one of life’s great learning experiences.

But there was much more to think about. The number of mainly Rohingya refugees in the country, which the United Nations and international agencies put at more than 911,000 people, is even greater than the 700,000 people who live in my city Vientiane, the Lao capital.

In fact, the number 700,000 is closer to the latest number of Rohingya who fled Myanmar’s Rakhine state in the weeks and months after August 2017. The United Nations Office for the Coordination of Humanitarian Affairs (UNOCHA) puts the size of this last wave of displacement at 745,000 people. 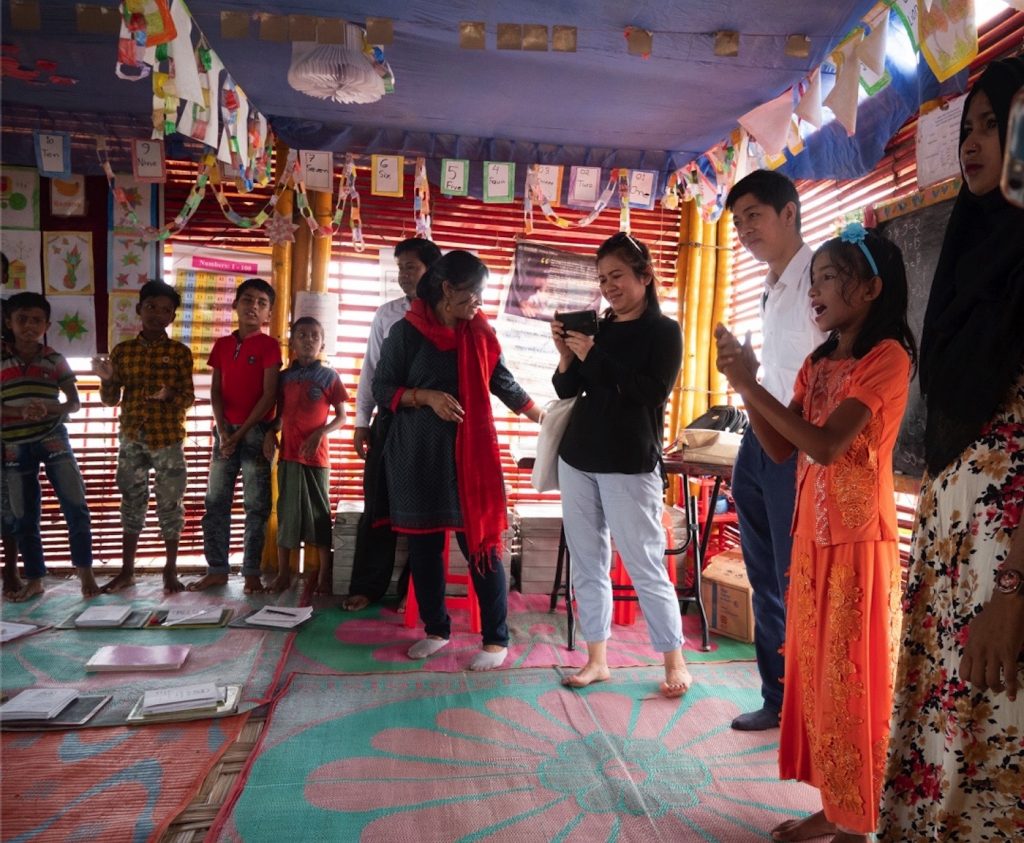 A learning centre in the camp. The writer, Vannaphone, is third from right. Photo: Equity Initiative

Visiting the refugee camps in Cox’s Bazar, home to mostly Muslim Rohingya from Myanmar, even just for the two hours I was there, made what used to be just another piece of news very real, and disturbing, for me.

Weeks after our September visit, the sight of the sprawling refugee camps in Cox’s Bazar, especially the stories of the women we talked to there, continues to play out in my head.

After the plane ride to Cox’s Bazar, our group, composed of 21 professionals from ASEAN countries and China in this year’s Equity Initiative fellowship program, travelled for two hours by van to the Rohingya refugee camp. On the way there, the scenery along the coast was beautiful and calm, contrasting with the huge ocean waves beyond it that looked like they would destroy anything that came in their way.

The more than 911,000 Rohingya refugees in the Bangladesh camp outnumber the number of residents in my city, Vientiane.

I could not help but think of how refugees across the globe, including the Rohingya, risked their lives through dangerous journeys, whether by boat or by land, to escape trouble at home. 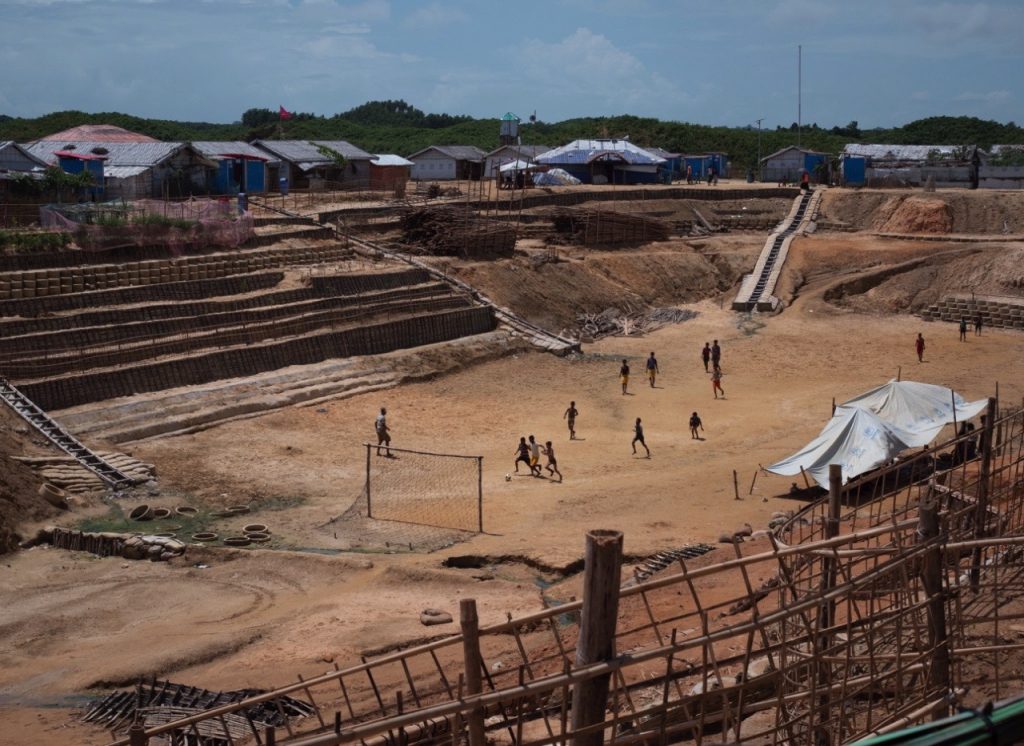 An attempt at recreation in Cox’s Bazar. Photo: Equity Initiative

I knew we had arrived when I saw rows and rows of shelters, along narrow lanes, that were covered with UN High Commissioner for Refugees (UNCHR)-marked plastic sheets and had thatched roofs. There are in total 35 camps, with the biggest in Kutupalong camp in Cox’s Bazar.

I was at the camp just briefly, but my mind kept going back to life back home in Vientiane – and how it different it was for the camp residents.

Typically, we can travel, work, do business, choose what school to send our children to, decide what to eat – or what movie to watch.

At times, or most of the time, people have the luxury of talking about what parts of their lives they think could be better, or expect to work better, as well as their hopes and desires. Parents, for example, can discuss their worries about issues such as their country’s education system and fault it for having less than quality standards due to shortages of facilities, resource limitations and poorly paid teachers. Others find inadequate their public services and their health care systems.

But all of these daily concerns seemed to shrink in comparison to the challenges faced by the Rohingya people, who have been denied citizenship in Myanmar.

Their statelessness means they have to stay inside the camps each day, without freedom of movement to go outside, without the ability to choose schools for their children – or even to work. It was hard to cast glimpses of hope upon the fate of these men, women and children.

I started my visit to the camp at the Integrated Centre for Women and Girls at a place called ‘Camp 4 Extension’. The centre is run by BRAC, a local non-government organization that now operates globally and is said to be the largest NGO in the world.

I was shocked to learn that most women who came for psychological consultation suffered from gender-based violence, including domestic violence, polygamy and abandonment by their husbands. Being a woman myself, I was quite disturbed by these stories.

Rohingya women are already victimized by persecution in Myanmar and fled across the border to Bangladesh to find physical safety, but life in the camps, even in their own families, could bring a different kind of danger, I thought.

Most of the problems the centre staff assist with originate from polygamy which, I was told, is a practice that is widespread but without enough exact data.  A typical story was that a husband abandons wife and children, the staff explained. Usually, he then moves to another camp and marries another woman, and often starts another family as well.

When this happens, married women generally end up abandoned, along with their children. But sometimes, husbands will want to keep both wives in the same household. BRAC often tries to mediate in such difficult situations in the camps, where more than 50% of the population are women and children.

Women who are unhappy with this situation can go to a court of law but this rarely happens because polygamy is accepted as a norm, according to BRAC staff. Within the Rohingya community, marriages are mainly religious ceremonies but have some sort of documentation. Bangladesh doesn’t recognize marriages between members of the host and refugee community.

There are various reasons for why polygamy exists, including a lack of economic opportunities, a lack of entertainment, low social capital, gender imbalance between men and women, according to the BRAC staffers. For some sectors, it is a misinterpretation of Islam, they added. 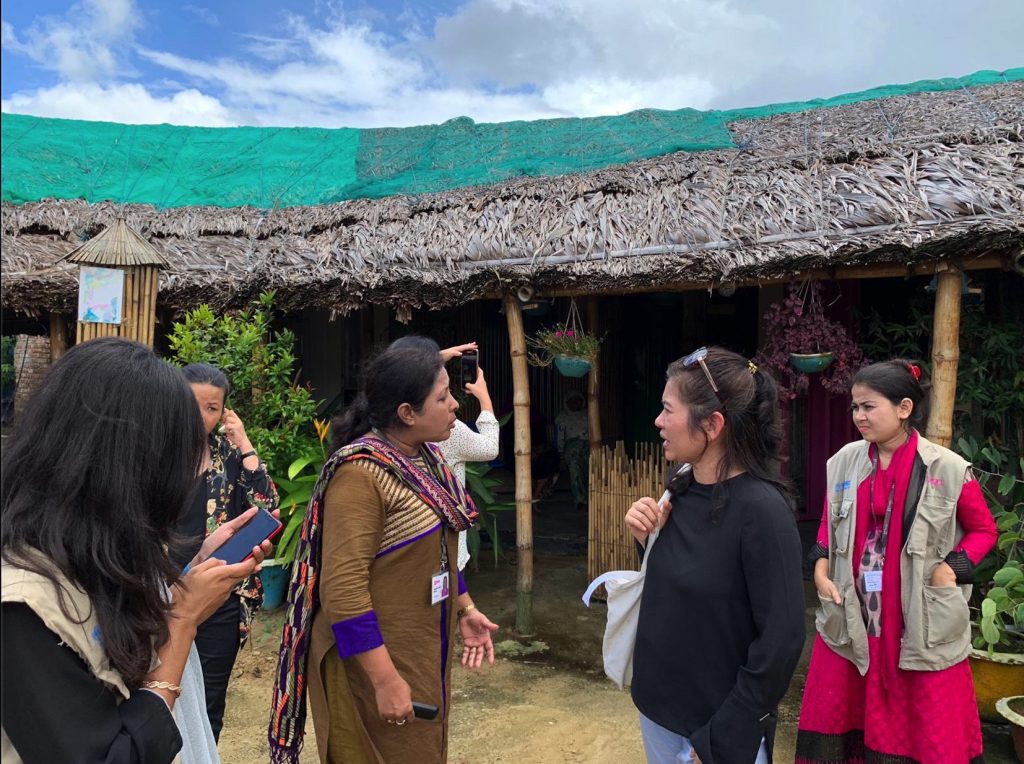 Even though polygamy is not legal in Laos and most other ASEAN countries, I found myself trying to think of what this means for women in this situation, and if they could really, really accept it.

Even in communities where polygamy or adultery is not allowed, similar behaviour by some men is already seen, and is all too common. So, are these not social ‘norms’ and behaviour that, even if accepted, can only result in hurting women, not least emotionally, in the end?

(*Vannaphone Sittirath is a film producer based in Vientiane, Lao PDR and a former TV journalist. She is also a mother of three.)