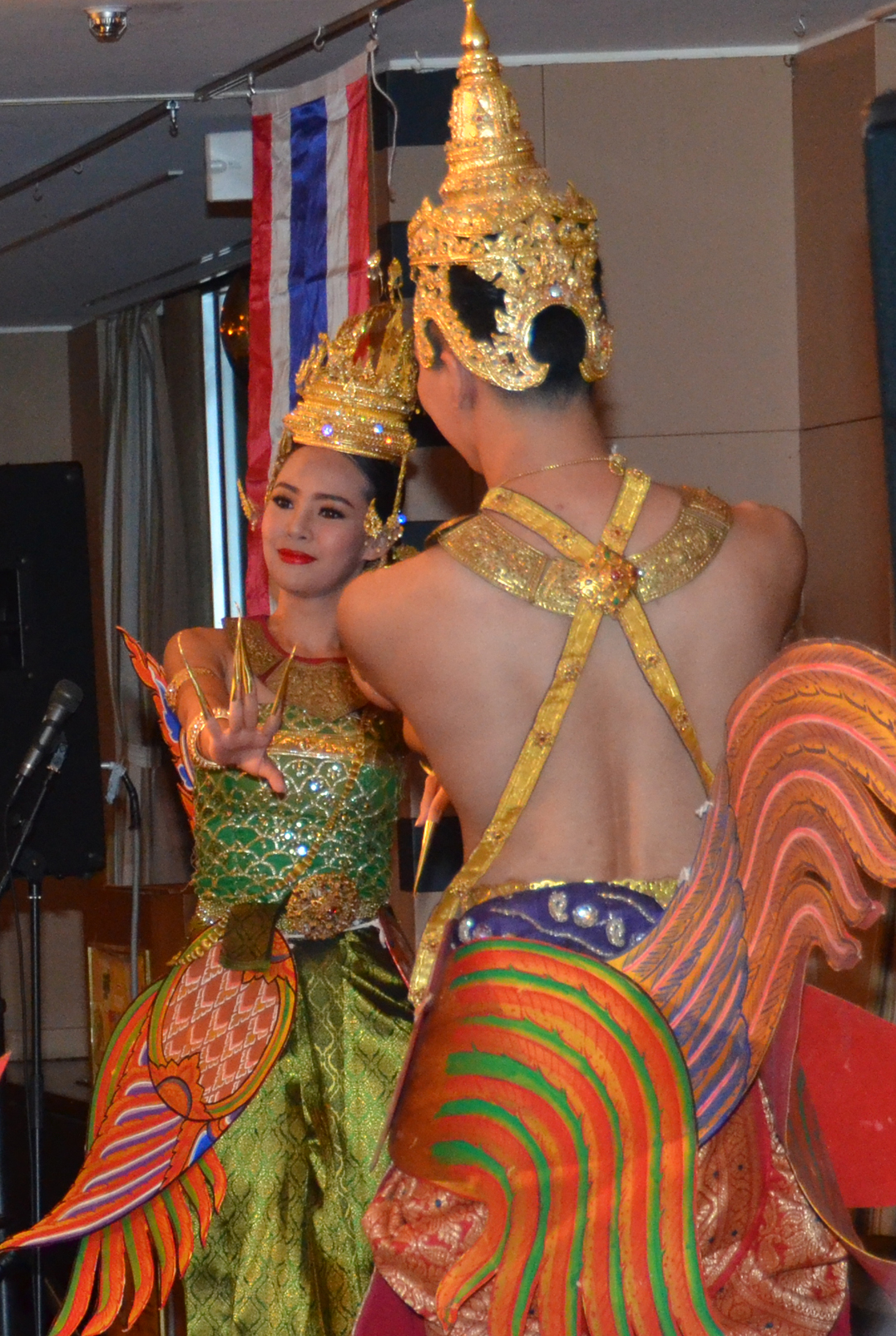 TOKYO, Aug 8 (Reporting ASEAN) – Japan has had long-running, deep engagement with Southeast Asia. But the region’s deeper integration through the upcoming ASEAN Community provides a new opportunity for the country to emerge as an Asian leader – at a time of disquiet about rival China these days.    Stronger ties with the 10 member countries of the Association of Southeast Asian Nations (ASEAN) are in line with Prime Minister Shinzo Abe’s plan to usher in both a dynamic economy and global role for Japan, experts say.

“The projected ASEAN Community is a positive step for both Japan and the Southeast Asian bloc. Stronger collaboration will not be restricted to economic growth, but also include diplomacy and people exchanges,” said Prof. Takeshi Inoguchi, the president of University of Niigata Prefecture who is an expert on Southeast Asia.

They are part of China’s strategy – the country claims most of the South China Sea – to establish a permanent presence in the waters that have overlapping claims by ASEAN members Brunei, Vietnam, the Philippines, apart from Taiwan. 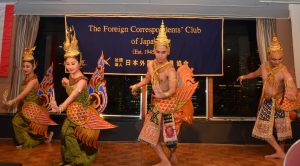 Thai dancers at the foreign press club in Tokyo.

“The emergence of Japan is important for ASEAN to balance regional politics. The mainstream opinion, voiced particularly by Singapore, is maintaining a power balance. The countries reject the idea of a single dominating force,” explained Inoguchi.

China’s Gross Domestic Product is already bigger than Japan’s. During its decades of double-digit economic growth allowed the country to exert its economic and diplomatic muscle in the region, becoming a key market for ASEAN countries and a driver for their economies. GDP growth has been decelerating in recent years, falling from 7.7 percent year on year in 2013 to 7.4 percent in 2014. The World Bank expects China’s GDP growth to slow further to 7. 1 percent this year. The effects of China’s cooling economy and its turbulent stock market are already being felt in Southeast Asia, including in countries like Singapore.

Under Abe’s leadership, Japan is aggressively touting its superior technology and financial clout. Tokyo is also pushing its commitment to peace and security in the region.

It has issued official remarks supporting “the importance of maintaining peace, stability, freedom and safety of navigation in and over-flight above the South China Sea,” including in the 30th ASEAN-Japan Forum in June. Such remarks have drawn Beijing’s ire.

At the East Asia Summit on Aug. 6, Chinese Foreign Minister Wang Yi said the Philippines, which brought China’s actions in the South China Sea to The Hague in July, was being supported by Japan. It then said Japan itself had built up a remote island in the Pacific called Okinotori to enforce Japanese territorial claims. “Before criticizing others, Japan must first take a good look at its own words and behaviour,” Wang was quoted as saying.

From a larger perspective, Japan’s goal of having a dynamic economy and an increased global role is part of aspirations coming 70 years after its defeat in World War ll. In many ways, the anniversary is viewed in some quarters as time for a fresh start, given the scars that Japanese colonization has left with its Southeast Asian neighbours.

The push for a renewal of sorts can be seen in the Japanese coalition government’s approval of a reinterpretation of its Pacifist Constitution that would allow Japanese Self-Defence Forces to fight overseas for the first time since the Second World War.

From the perspective of economic and business ties, Japan and ASEAN know each other quite well after decades of doing business together. Japanese investments are acknowledged for creating manufacturing networks that pushed integration and industrialisation even before ASEAN governments took formal steps toward deepening and formalising such linkages.

“Japan is not a newcomer in the ASEAN for Japanese investment is clearly linked to the impressive economic growth in the region since the eighties, when countries such as Thailand and Malaysia became important manufacturing hubs for export,” said economist Masaaki Ishida of the Institute of Economic Developing Economies, a quasi-government think tank.

“The birth of the ASEAN Community represents for Japan a lucrative market and a place for joint production,” he added. In fact, he says that the onset of the community represents endless opportunities, with progress marked by partnerships based on corporate cultures familiar with one another’s ways.

Japan continues to have a larger presence as an investor in ASEAN rather than a trade partner, a role dominated by China.

Japan the third largest trading partner of ASEAN after China – the biggest trade partner – and the EU.As of data by June 2015, ASEAN’s trade with China’s took up 14.5 percent of ASEAN’s total trade, while trade with Japan stood at 9.1 percent. http://www.asean.org/images/2015/July/external_trade_statistic/table19_asof17June15.pdf

Japanese net foreign direct investment as of 2014 was the third largest after other ASEAN external partners such as the European Union, and then China. For the period 2012 to 2104, statistics from the ASEAN website show that net FDI flows from Japan totaled 15.3 percent vs China’s 5.8 percent. EU investments, however, stood at 15.7 percent, just a bit over Japan’s.

ASEAN comprises Brunei, Cambodia, Lao People’s Democratic Republic, Myanmar, Singapore, Thailand and Vietnam, creating a market of 600 million people.   Thailand, Malaysia and Indonesia continue to hold the strongest attraction for Japanese companies, according to a 2014 report by the Japan Bank for International Corporation. In the same survey, Laos and Vietnam are becoming attractive investment destinations due to cheaper wages when compared to China.

A potent sign of the region’s importance for Japanese companies is Mitsubishi Motors’ announcement at the end of July that it plans to stop production at its only factory in the United States to focus on Asian markets.

At the same time, Ishida adds that Japan will continue to play a big role in infrastructure development in ASEAN. Abe has pledged 10 billion US dollars to support high-quality investment in Asia over five years, to challenge the clout of the China-led Asian Infrastructure Investment Bank. Japan and the United States are not members of the bank.

Japan also expects to continue playing a major role in the development and connectivity of the Mekong subregion, whose members include five ASEAN countries. At a May conference here, five Southeast Asian countries along the Mekong River (Cambodia, Lao PDR, Myanmar, Thailand and Vietnam) requested high-quality infrastructure support under a new strategy for Japan-Mekong cooperation.

“We appreciate Prime Minister Abe’s policy of quality growth,” Sok Siphana, advisor to the Cambodian government, was quoted as saying in the Japanese media. He called on Japanese investment in environment-friendly technology and human resources development, as well as hard infrastructure. (With additions from/edited by Johanna Son – (END*ReportingASEAN)

(*This feature is produced as part of the Reporting ASEAN: 2015 and Beyond story series, a programme with the support of the Rockefeller Foundation and the ASEAN Foundation/Japan-ASEAN Solidarity Fund.)