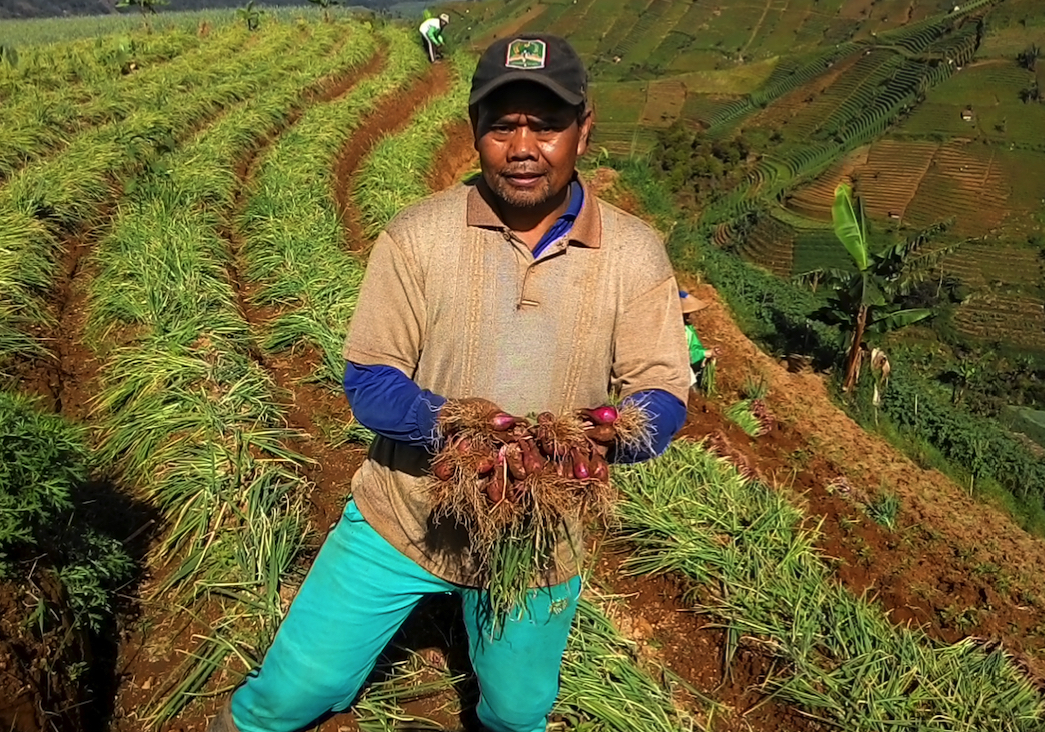 BANTEN, Indonesia, Dec 29 (Reporting ASEAN)— Anastasia Sriyati, a 47-year-old homemaker, was surprised to find in early December that prices of certain agricultural produce had gone up in just a few weeks.

The ASEAN Community, which includes the ASEAN Economic Community as its economic pillar, was due to be launched in December, and she expected the regional bloc’s single market and production base to help bring down the prices of agricultural products.

“I really hope we can get cheaper shallots, garlic, and other food products when the ASEAN Economic Community comes into force,” she said. 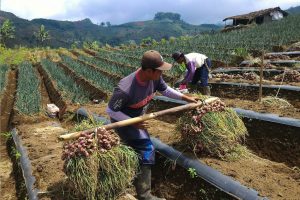 Launched on Dec. 31, the ASEAN Economic Community aims to facilitate the free flow of goods, services and investments and the freer movement of specific types of skilled labour across the region. It is meant to be culmination and continuation of a process of economic integration that has been underway among ASEAN’s member countries over three or more decades.

Under various agreements since the nineties, including the current framework of the Economic Community, the 10 ASEAN members, including Indonesia, have been scrapping import tariffs on virtually all goods in order to increase intra-regional trade.

For consumers like Sriyati, news about the AEC raises hopes for access to a wider range of quality products at affordable prices. However, buyers of horticultural products in this province and elsewhere in the country may have to wait longer before they could get cheaper shallots and garlic from other ASEAN countries.

In September 2015, Indonesia’s Ministry of Trade issued a regulation – one that could be construed as a Non-Tariff Barrier (NTB) to the free flow of vegetables and fruits into the country, including those from ASEAN countries. Article 2 point 1 of Trade Ministry Regulation 71 states “import of horticulture products is limited” by, among others, setting the annual import allocation that is decided in a coordination meeting among the ministries of agriculture, trade, and Industry.

“Trade Ministry Regulation No 71 is in line with existing laws that stipulate that the government manages foreign trade through policies and controls on both exports and imports,” said Muhammad Yani, head of the Agriculture, Forestry, Marine, and Fishery division of Import Directorate under the Ministry of Trade.

For instance, importation of fresh chili and shallots for consumption is allowed only if it conforms to the reference price set by the Indonesian government.

Since 2012, the government has limited to four the number of entry ports for horticultural products: Belawan Port in North Sumatra, Tanjung Perak in East Java, Makassar in South Sulawesi, and the Soekarno-Hatta International Airport.

“Had we not limited the number of entry ports, imported horticulture products would have flooded Indonesia’s market, as our farmers cannot compete with imported products because their unit costs are different,” said Spudnik.

This reflects the government’s rationale in controlling the imports of these products to protect local producers, but it also raises the question of its effectiveness ­– and whether it is really meant as a barrier to freer trade in goods – given that consumers find the prices high and supply inadequate.

In addition, economist Enny Sri Hartati warned that Indonesia’s decision to limit the importation of horticultural products could draw protests from other ASEAN countries, since the country did not exclude such items from the tariff liberalisation list.

“In any free trade agreement such as WTO (World Trade Organization) and AFTA (ASEAN Free Trade Area), any member country is allowed to exclude the agricultural sector or other vital sectors from the list of liberalization,” said Hatarti, director of the Institute for Development of Economics and Finance. “But such a decision must be discussed openly from the very beginning and must not be unilaterally decided along the way.”

Indonesia is committed to removing tariffs on imports from other ASEAN countries except rice, refined sugar, and alcoholic drinks, which are subject to tariffs of 20 percent, 10 percent, and 150 percent, respectively.

Economist Didik J Rachbini said Indonesia may actually remove horticultural products from its list of general exceptions of tariff-free items, but it needs to have strong arguments for doing so.  “ASEAN member countries have to understand each other’s conditions. Otherwise, other countries have all the right to retaliate by preventing Indonesian products from entering their markets,” said Rachbini.

In 2014, Indonesia imported 1.65 million tonnes of horticultural products worth $1.64 billion dollars, up from 1.55 million tonnes, or 1.52 billion dollars, in 2013. Garlic and radish, mostly from China, account for the bulk of vegetable imports, followed by potatoes from Australia and Canada, and shallots from India and the Philippines.

At least 95 percent of domestic demand for garlic is met through imports, which account for 50 percent of the total value of imported vegetables.

Import liberalisation during the economic crisis in 1998 and under the accelerated ASEAN Free Trade Area (AFTA) agreement in 2000 “sent Indonesia’s garlic production down, with total harvest areas decreasing by an average of 14.5 percent every year and production down by 14.7 percent per year,” said Spudnik Sujono, Director General of Horticulture at the Ministry of Agriculture. He added that prior to 1998, Indonesia was able to meet the domestic demand for garlic.

AFTA, which came into force in 1993, aimed to remove obstacles to freer intra-regional trade. In 2000 the Common Effective Preferential Tariff Scheme for AFTA, signed by the member countries a year before, was expanded to include other products subject to 0 to 5 percent tariffs.

From 2000 to 2014, the volume of garlic imports in Indonesia totalled 2.2 million tonnes, or around 440,000 tonnes per year, while domestic production stood only at 77,333 tonnes during the period.

Aside from China, Indonesia also imports garlic from ASEAN members Vietnam and Thailand.

For 2014, according to Spudnik, “we will no longer import shallots as we have enough supply.” He added that Indonesia will start exporting over 5,000 tonnes of shallots to Thailand, Singapore, Malaysia, and Vietnam in 2015. 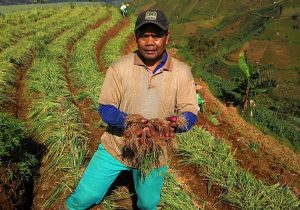 Data from the Directorate General of Horticulture show that some 226,234 households currently depend on shallot cultivation, with harvest areas totalling 120,704 hectares as of 2014.

Mudatsir, a shallot seed producer in Cirebon, Central Java, said the AEC provides an opportunity for shallot farmers to compete with their counterparts in the Philippines, Thailand, and Vietnam.   Indonesia can plant shallots throughout the year, “and sometimes our harvest time comes when Vietnam and Thailand are just starting to plant,” he said. “Indonesian farmers are not against importing shallots, but we ask the government not to allow imports during our harvest time.”

Mudatsir added that the farm gate price of shallots range between 8,000 (57 cents) and 9,000 rupiah (64 cents) per kilogramme — just enough to cover production costs.

“Ideally, the prices of shallot at farmers’ level should be around 10,000 (71 cents) and 15,000 rupiah (one dollar) per kilogramme. The farmers do not want prices to go higher, as higher prices would drive seed prices up for the next planting season,” said Mudatsir.

But for the meantime, the government’s long-time policy to limit imports of horticultural products, including shallots, keeps prices remain high for most Indonesians.  “With prices continuing to rise, we cannot but reduce our consumption of both shallots and garlic,” she said.  (END/Reporting ASEAN)

*This story was produced for the ‘Making AEC Work: Digging Out Non-Tariff Barriers’, in partnership with The Asia Foundation. A version of this story in Bahasa Indonesia was published in ‘Suara Pembaruan’ newspaper in December 2015.