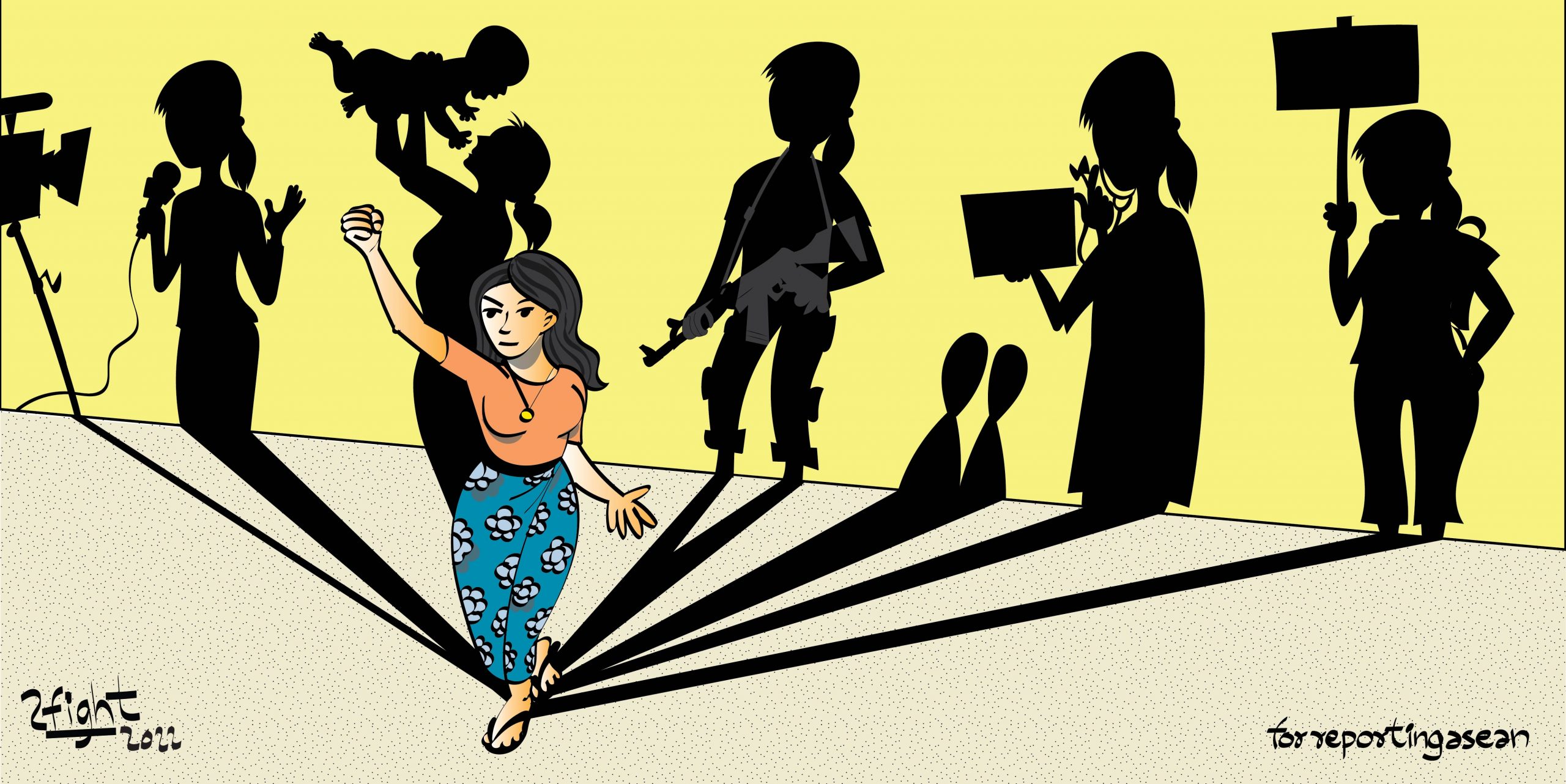 Home » Views and Points » In Myanmar, the Anti-junta Resistance is Hers

One woman fled to Myanmar’s borderlands, going with her army officer husband who defected after the military coup of 1 February 2021. A mother prays for the safety of her son, who is fighting the army with the People’s Defence Forces (PDFs). An entrepreneur uses her business acumen to raise funds for the anti-military struggle. For her part, an activist helps women affected by conflict.

In various ways and from various backgrounds, many Myanmar women have been creating for themselves different roles across different fronts of the continuing resistance to the military, which seized power in the country of more than 55 million people.

Below, some of these women tell us their stories, in their own words.

‘We Don’t Have Money, But Are Safer’

Thazin, 41, wife of an anti-junta soldier who defected from the military

Thazin’s family has had to move four times since her husband decided to defect from the military, where he was a middle-ranking officer after 21 years in the service. She now lives in an ethnic-army held area of Myanmar, where her husband has helped train PDF units. Her two older daughters, aged 17 and 16, have also undergone combat training.

In her words:  One morning after coup, my husband told me that he would leave the military. At first I was really afraid and didn’t accept his decision, because we have three children. But I realized that he didn’t feel comfortable and safe any more.

I (now) consider that wherever we live together is my home. We faced many challenges. We were being suspected of being informers at first. So we have to build to get mutual respect in any place we had to move to. So sometimes I wanted to cry, but later they believe us and welcome us warmly. Now I feel at ease, and understand more our country’s real situation.

Before the coup, we had to be fearful of higher-ranking officers. Now we live securely in the people’s embrace. Villagers send us all kinds of food, like rice, oil, vegetables. They even send us snacks. We don’t have any money but we can survive happily and are safer than before.

As the wife of a CDM (Civil Disobedience Movement) soldier, I’ll follow what he decides. I’ll support in any way that I can. Even my two daughters are contributing to the revolution. They are used to the sound of bombs and gunshots. They say that they are eager to fight.  I’m really proud of my daughters, but sometimes I feel sorry that they are facing this dark age.

‘I Wait for My Son to Come Home’

Wa Toke, 56, mother whose son is with the armed resistance

She has been struggling to make ends meet in Yangon, taking sewing work despite health challenges. This has been her situation since her 23-year-old son, who used to help her sell clothes and other items, left to join the PDF.

In her words: These days, everybody is struggling and faces every kind of challenge. As for me, I’m the only breadwinner for my family. So I have to continue (to survive) for my family.

At first I didn’t allow him (my son), and forbade him from joining the PDF. But I finally let him go because he was eager to go. . . . I can only pray for him from home. I am on edge (when seeing) news about fighting.

Our family is being watched (by township authorities and the police) until now.  They always wait and see what we are doing. So I don’t let my son’s friends come to my home. I don’t want to put them in danger. Most of the time, I keep my door shut.

The only thing I worry about is my youngest son’s safety. I’m relieved when he calls me. I’m proud of my son, but I feel sorry and worry for him. In this revolution, even though the military has got enough weapons, we’ll win in the end. I keep my spirits up and wait for my son to come home.

‘I Want to Do Something Daily for This Revolution’

Nai, 38, shop owner who raises funds for those in the civil disobedience movement and the anti-junta militia

Nai, owner of a floral arrangement business in Yangon, was a regular in the street demonstrations that erupted after the coup. In July 2021, police and soldiers raided her apartment and that of her neighbours. “But fortunately I was not there,” she recalls. After seeking shelter with relatives and friends in the city,  she later moved to a liberated area in central Kayin state.

In her words: After the coup, I had to close my shop and I haven’t had a chance to earn any money (for myself). I can’t support my parents, and I had to move nine times. Even in my dreams, I’m running away.  Insecurity is the biggest challenge for me in these days.

I feel very anxious. I cried whenever I moved from one place to another. . . . I feel most sorry  (about this situation) when I am sick. Life is full of uncertainties after the coup.

I want to do something daily for this revolution. As I have some experience in sewing, I’m sharing this skill with CDM teachers in the border area, with the help of non-governmental organizations. I get depressed when I’m not doing anything. As I used to own a flower shop, I also earn some money from selling some flowers so I can donate that to the PDF people, but it is not much. I’m also selling CDM products (those that anti-coup groups make to get some income) online.

We have an uncertain future. But the whole country faces this (too). For me, the only answer to solve these problem is revolution. From my experience (after the coup), I’m more mature than before and now understand well what empathy means.

‘The Biggest Fear is Fear’

Nu, 61, a volunteer who supports women in conflict areas

There have been more cases of violence against women since the coup, including in conflict-affected communities, says Nu, based in Shan state. In rural areas, some of these are perpetrated by soldiers and others by residents. She has helped in cases of sexual abuse and rape, including trying to get offenders like solders disciplined.

In her words: We all are struggling under the unstable political situation and the pandemic. We live with insecurity, economic problems, and the biggest challenge is the fear related to the political landscape. Local people have been killed by air strikes, landmines in atrocities, including in the ethnic areas. Brutal clashes have left families without heads of households. So, women have to face more difficulties than before.

Even though we all have these fears, we have to help each other.  If somebody asks for help, I cannot ignore that. I am being watched by the military. I’m afraid, but I’m still helping in women’s cases.

We live with fear due to the current political situation. So the biggest fear is fear.

I really hope for the day we all can live without fear, relying on the strength of the people. Myanmar women need assistance for their mental and physical safety. I don’t know exactly when, but I believe we will, in the end, reach the moment of victory.

(*Interviewees’ names have been changed for safety reasons. Interviews were originally done in Burmese, and above are excerpts edited for clarity and length.)

Take a look at our editorial cartoons around Myanmar here.