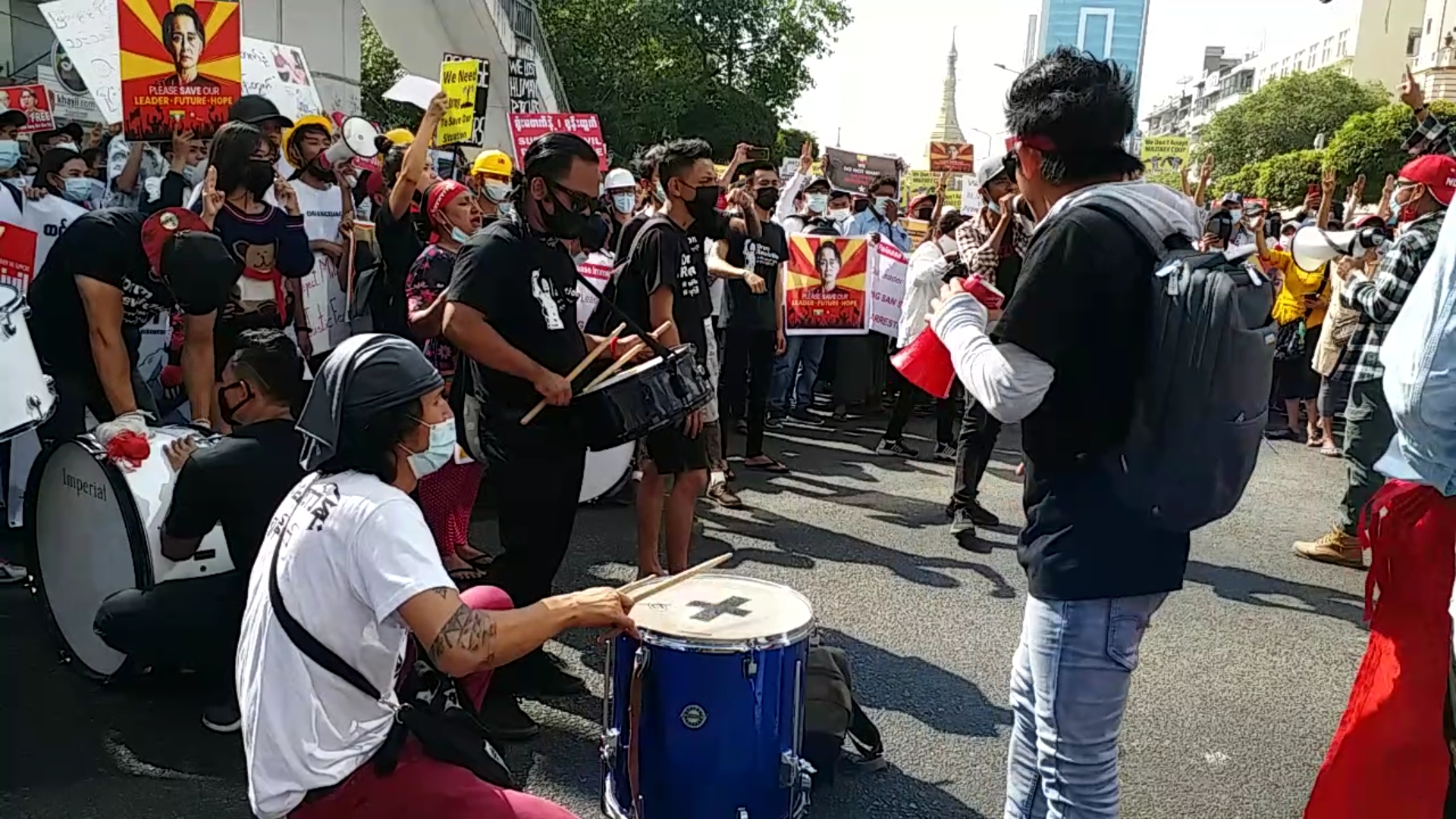 Home » Features » In Myanmar, Music is the Voice of Protest

YANGON – The 1988 pro-democracy protests in Myanmar were heady days, a time when danger and excitement mixed freely among university students like me in the streets of Magway, my hometown in the country’s central region. Soon after, the terror of the military regime of the 1990s era kicked in, until the country’s supposed transition to democracy started around 2010.

But the 1 Feb military coup has sent us back into the streets – and singing and listening to many of the same protest songs, despite the gap of 33 years between then and now.

I never expected to be singing these songs again, this time together with my son’s generation. Until the coup, I had thought that this generation was only interested in three things: eating, sleeping and play computer games. They have been proving me wrong.

Very quickly in fact, younger people have learned to sing three songs in particular that were a product of the 1988 pro-democracy movement. They were not even born at that time, but many now know the songs’ lyrics by heart, after they brought printouts of these to the protests and sharing them with friends. Many have heard the tunes from their parents.

Today’s young pro-democracy protester, too, are discovering the power that has music has to call people into joining the street protests, and to boost one another’s morale. Take a close look at the scenes in Myanmar these days: While armed soldiers and riot police stand watch with guns, protective shields, and batons, anti-coup protesters wield weapons such as ukuleles, violins, guitars and drums.

Crowds gather, and everyone around seems to be instantly ready to sing, as soon as they hear the drum rolls get underway.

They then usually warm up a rally with the first song, Blood Oath, which was written by the late singer and songwriter Htoo Ein Thin, a former student activist who went into exile after the 1988 uprising and joined the All Burma Students’ Democratic Front (ABSDF).

He had written ‘Blood Oath’ (‘Thway Thitsar’) beside the Thaungyin River, during his time with ABSDF in Thai-Myanmar border area and recorded it in a Bangkok studio. Subsequently, his album of revolutionary songs was smuggled into Myanmar and spread among students there. I remember first hearing this song from a cousin who had brought it in from Mawlamyaine, on the border with Thailand. In English, its lyrics go:

Let’s unite and march together.

We wrote our new history with our blood,

“We give our lives for the nation,

We will march together with the peacock’s blood (a reference to the students’ resistance movement, whose symbol is the fighting peacock).

For our freedom and peace,

we must fight the last battle.”

After more crowds gather while ‘Blood Oath’ is being sung, protesters usually move to the song “We Shall Not Surrender Till The End Of The World” (‘Kabar Makyay Bu’), which uses the melody of the 1977 hit song ‘Dust in Wind’ by the American group rock band, Kansas. Clips of protesters singing this song in unison have gone viral.

The well-known songwriter Naing Myanmar, who penned the lyrics during the 1988 protests, told ‘The Irrawaddy’ news that he had written the song for the unknown heroes who gave up their lives during the pro-democracy revolution. The song starts this way:

“We will not forget the history written by our blood

Till the end of the world.

Oh our fallen heroes, you gave your lives for the revolution.

This is the country of the martyrs and brave people.”

The song honours historical figures such as Aung San, called the father of modern Myanmar, and poet and political thinker Thakin Kodaw Hmaing, remembered for initiating the peace movement in the country.

To many of us, this song brings back painful memories of the bloody military crackdown on the streets of Yangon in 1988. Singing it these days is our reminder to today’s military regime that they should not make the same mistake, but I fear that this reminder will not work.

A third popular protest song in the rallies is Encourage Mi Nge (‘Khon Ar Phyait Mi Nge’), which many political prisoners used to encourage one another while behind bars. Composed by the legendary songwriter Ko Ne Win, part of the song’s lyrics go like this:

“After passing through the night after the sunset,

the new day will come with the sunrise.

If we endeavor with commitment,

we will succeed and escape one day.

As the road of ‘samsara’ (the endless cycle of birth and suffering in Buddhism) is not smooth,

“Don’t give up my young sister.

You can cross the rough road with your brave heart.

When you take responsibility for the sake of others,

you have to sacrifice your life.”

Over the past weeks, I have run into many friends from the 1988 protests – often with their sons and daughters too – at various rallies. “I can’t stop my daughter from joining this movement of her generation,” a poet friend said. “I can’t be at peace staying at home while she is out in the streets, so I follow wherever she goes.”

These songs of protest run through us, whether we are from Generation X, Y or Z.  As the ‘88 Generation student leader Min Ko Naing, who has been in hiding since the coup, said in a pre-recorded message on 17 Feb: “This revolution represents a combination of Generation X, Y and Z in fighting against the military dictatorship.”

The 2021 people’s revolt is already leading to the creation of new songs that denounce the military regime and exhort Myanmar’s people to join the civil disobedience movement, such as one entitled ‘The Dictatorship Must End’ (‘Arnarshin Sanit Asone That Ya Myee’). The song, whose original composers and singers are unknown, goes:

“Our bones and blood are to defeat the dictator.

We can’t be tied up by fear.

We are ready for the revolution. They are power-crazy people.

We all have to stand up to end the dictatorship.

We must end the dictatorship.”

I first heard this song, which opens with drums, at a 17 Feb protest in Yangon where, apart from calling for the release of “Mother Suu”, in reference to State Counsellor Aung San Suu Kyi who has been detained with President Win Myint, rallyists were shouting, “We must end the dictatorship!”

The protests against the military takeover continue, but the police and military’s use of force have also been increasing in past days in Yangon, the former capital, and the military-built capital Nyapidaw, as well as Mandalay, Myitkyina and Mawlamyaing.

A central force driving the rallies is the 2021-generation students, who enjoy playing online and video games but put the same concentration into playing the drums, violins and other traditional musical instruments when they gather in the streets. The music they have been making echo the unfulfilled dreams of their grandparents and parents – as well as the call of Myanmar’s future.

(*Mon Mon Myat, a journalist, is a PhD candidate in the peacebuilding programme at Payap University in Chiang Mai, Thailand. This is part of the Lens Southeast Asia series of Reporting ASEAN.)