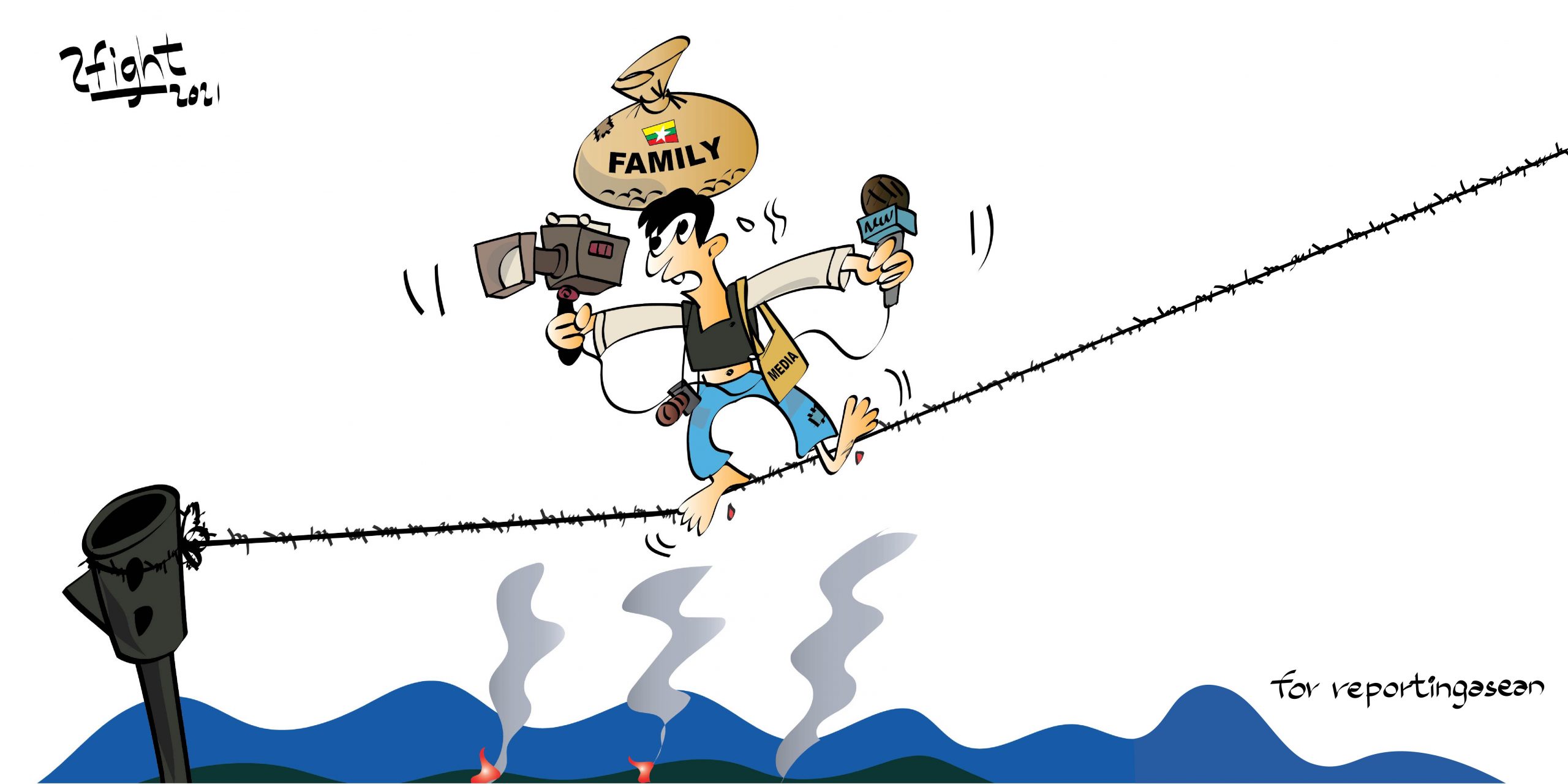 Home » #mediaonmedia » In Myanmar, Journalism is a Minefield

Instead of looking for news, some journalists in post-coup Myanmar are looking after the cosmetics and clothes that they now sell for a living. Those who have stuck to news scrape by with slashed salaries or work without pay. Others have fled to the borderlands or sought refuge overseas. A number have traded pens for swords, joining armed units that are fighting the military in different parts of the country.

These are scenes that have been unfolding within the larger story of journalism in Myanmar, a line of work that has been under siege since the military took power a year ago on 1 February 2021.

Like many others in this country of 55.5 million people, journalists have been living in a state of chronic stress as they make decisions about their livelihood and safety with little knowledge of what the future looks like.

“I’m the only breadwinner for my family. I dare not take the risks that come with a journalist’s life in this period,” said a 38-year television reporter, who has been doing bicycle deliveries to make ends meet. “There are media houses that have offered me (work) to cover the military’s activities from a favourable point of view. But I don’t want to write that kind of news even if I’m in hunger.”

Whether it is because they lost their media jobs or found them too risky, many news people have moved to other ways of making a living, be it working in non-media firms, or selling snacks like ‘mohinga’ (fish-based noodle soup). ‘ngapi’ (fish paste) as well as bus tickets.

For some, the past year has meant dealing with realities such as long-term separation from families, life in exile or as asylum seekers or refugees.

“When I saw the video clips of other families, I cried and missed my family so much. My baby is so young, so I couldn’t take them (family members) with me,” said another journalist who, for eight months now, has been living in a ‘liberated’ area, or those that are controlled by ethnic groups that have been fighting the Myanmar military for seven decades or more. An arrest warrant is out for him on an incitement charge under Section 505 (a) of Myanmar’s Penal Code, the legal weapon most often against journalists since the coup.

“But later on, I always consider that we can survive, even though we live far apart,” he continued. “It is better than other families whose members lost their lives.”

ON ALERT, ALL THE TIME

That being in journalism in Myanmar is dangerous is clear from the continuing arrests of news staffers. (As of 25 January, there have been 120 known arrests, and 46 media staff are still in detention. But being a journalist is a risk for other reasons too.

Residents can see having a reporter living in their area as a red flag, one that increases the risk of being raided by security officials.

“Journalism is not a crime but the junta makes us criminals. I’m always afraid of being watched whenever I go outside,” explained one female newspaper journalist who now contributes news without getting paid. “I can’t even go back to my native town because my neighbours know I’m a journalist, and they think that journalists can bring harm (as security risks) to them .”

Local journalists like her are the ones at most risk. “I had to try not to let my surroundings know that I’m a journalist,” said the same reporter, who has moved many times to avoid the military’s informers. “No media house protects me because I’m a freelancer. So I try to be safe by myself.”

“The junta is spreading fake information,” added another journalist, who has worked in the media for eight years. “I’m going to do reporting under any kind of risk because there were a lot of people who lost their lives for democracy.”

News professionals are grappling with some difficult, uncomfortable questions about how they view, and live, journalism amid a conflict they cannot ignore.

Higher-profile news outfits operating in exile, in Thailand and elsewhere, as well some ethnic- community ones, have been receiving funding from international groups. But individual journalists and small media groups at the township and regional levels inside Myanmar badly need assistance too, says a veteran media trainer.

He estimates that less than 5% of the local journalists who need very basic help, such as money for food and daily expenses, receive any assistance.

These days, local journalists make do with pay cuts of up to 60%. Others get half their monthly salary for 15 days’ work. A reporter typically makes 200,000 kyat a month (110 USD using the Myanmar central bank’s) and an editor, double that.

RISKS ON TOP OF MORE RISKS

Even if a journalist is able to carry on in news, there are other challenges to face. The working environment has deteriorated in many more ways apart from the risk of being arrested or killed, leading to impacts that can only be unhealthy for the quality and diversity of news.

Over the past year, journalists have had to be careful about contacting sources they do not know well enough, out of concern that their conversation could end up being reported to the junta. In this toxic environment, some people do not even let one another know what they are doing or reporting on at the moment.

Journalists have little or no trust in the Myanmar Press Council, which has become part of the military regime after former members quit in disarray soon after the coup. Coup leader and military chief Senior Gen Min Aung Hlaing spoke at the swearing-in event of new council members in November 2021.

Independent media training elsewhere, mostly around safety, has restarted. News professionals must use these dark days to improve its skills in order to repair a damaged profession one day, says the veteran journalist. “We must take as much as we can because we have to train the ones who want to be journalists in the future,” he pointed out.

Estimates of the number of journalists in Myanmar were at 6,000 before the coup, but this figure is certainly much smaller today.

Meantime, news professionals are grappling with some difficult, uncomfortable questions about how they view, and live, journalism amid a conflict they cannot ignore.

“At the beginning of the coup, I felt miserable about the inhumanity I saw while covering the demonstrations. I cried daily and felt guilty. So I made up my mind to go the EAOs’ (ethnic armed organisations) area,” a 30-year old TV reporter said. She trained with the people’s defence forces (PDFs), the resistance forces that have been defending their communities and launching guerrilla attacks on the military.

Others ask how they can be news persons, citizens and individuals working for a more democratic, if far from perfect, system – all at the same time. Some equate journalistic ‘objectivity’ or ‘neutrality’ with weak action to resist military rule, while others believe one can keep to their professional media identities and be firmly against the junta.

“I don’t want get comments from the military side and make news for ‘impartiality’. There is only one truth with the coup. They are murderers. So I want to the cover what really happens without asking them anything, and they never say the truth (anyway),” pointed out a reporter who has 12 years’ experience in the media. “I value humanity than professionalism.”

But one former journalist, who left her job after the coup to find more reliable income, said: “I can’t rely on it a profession (now) but I can write my reports professionally.”

Whether through the lens of survival, livelihood or professionalism, journalism will continue to be a minefield to navigate in a troubled Myanmar – where information is as much a weapon as guns are.

But even in this hostile environment, many are keeping their eyes on a better time, in the future. For them, the independent media in online spaces – many continue to publish after their licenses were revoked and many new ones have come up since the coup – are the bases from which to rebuild a broken profession.

Said a female newspaper journalist: “Even though I face many challenges at this time, I believe I’ll be a journalist again.” With Johanna Son

*This feature is part of the ‘Lens Southeast Asia’ series of Reporting ASEAN.