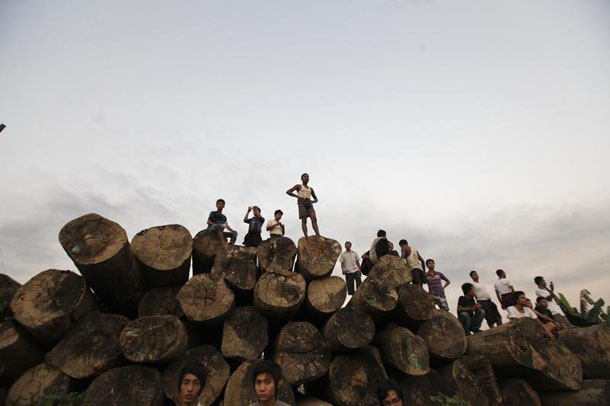 MYAWADDY, Dec 10 (Reporting ASEAN) — “Our Dawna range is like a bald head after severe logging,” said Aung Myo, a Myawaddy resident and trader, as he pointed toward the formidable Dawna mountain range in Karen State, near the Thai-Burma border.

Of Burma’s five official overland crossings with Thailand, it is here and at the adjacent Thai border town of Mae Sot that the illegal timber trade once flourished, and while that may no longer be the case, Aung Myo said it’s not for a reason that environmental conservationists would hope.

“More than 10 years ago, much illegal timber went to Thailand through this border area, but today there are very few timber trees left in the Dawna mountains,” he said.

The Dawna range, which extends north-south for about 350 kilometers and bisects the townships of Myawaddy and Kawkareik before tapering off in the western limits of the Thai highlands, once hosted a bounty of native timber specimens, including the prized teakwood for which Burma is renowned.

But in just over a decade, a combination of legal and illicit logging has wiped out large swathes of forest here, with Aung Myo’s anecdotal evidenced backed by hard figures from the United Nations.

According to the UN Food and Agriculture Organization, Burma lost an annual average of 1.7 percent of its forests from 2010-15, bringing total forest cover down to 45 percent. Just 15 years ago, forest cover stood at 65 percent, the UN agency says.

Policymakers have not sat idly by as the nation’s forests shrink; last April a ban on raw timber exports went into effect, requiring that all wood logged in Burma undergo value-added processes before leaving the country. But deprived of legal channels to move unprocessed timber out of the country, a thriving illicit trade continues, with the majority of illegal timber seized as it makes its way to trading points in northeastern Burma near the border with China.

This week brought news that authorities on Dec. 1 seized a stash of “ownerless illegal logs” in Katha, Sagaing Division, according to a report by the state-run Global New Light of Myanmar on Monday. A team made up of officers from the Ministry of Environmental Conservation and Forestry and the Myanmar Police Force discovered about 54 tons of logs in the Shweli River at Hlawkasin Jetty. Police said smugglers are believed to have logged the trees from Burma’s Kananme Forest Reserve before attempting to hide them through submersion in the river.

Via state media reports like Monday’s, the government is beginning to acknowledge the extent of the problem, but Win Myo Thu of the Economically Progressive Ecosystem Development group (EcoDev), a local NGO, told The Irrawaddy earlier this year that far more transparency was needed.

“Deforestation of dense forests is particularly worrying in Burma,” Win Myo Thu said. “Environmentalists are encouraging [the government] to issue an honest statement on current deforestation rates and the remaining forest coverage.”

Citing government data for the fiscal year ending in March 2013, last year Reuters reported that Burma’s total timber exports surpassed 1.24 million cubic tons and generated more than US$1 billion in revenue, of which teak alone earned $359 million. It is widely accepted, however, that in actual terms far more money and timber products are changing hands via the black market.

“The reason the logging numbers are massive is the government’s weakness in law enforcement and its capacity to control logging despite having limits on exports,” said Bar Bar Cho, senior consultant for the Myanmar Timber Association.

“We have massive forests across country. Forestry officials are not able to cover all these areas, so this is the result,” he added.

Burma’s former military rulers are often criticized for having overseen a decades-long plunder of the country’s natural resources, but more than a dozen ethnic armed groups on the nation’s peripheries have also used this natural bounty to fund their operations and enrich their leaders.

Ceasefires in recent years between the government and many of these groups, coupled with Burma’s political and economic opening, have brought the country’s rapid deforestation to the forefront of discussions in environmental and conservation circles.

Bar Bar Cho said two separate but related dynamics needed to be managed in order to stem the flow of illegal timber within Burma and exiting the country: the government’s relationships with neighboring countries and ethnic armed groups internally.

Illegal logging at the country’s borders is either directly or indirectly linked with non-state armed groups whose members, even if they are caught, may not face prosecution from a government that is reluctant to potentially jeopardize a peace process that it initiated in 2011.

The Ministry of Environmental Conservation and Forestry’s ability to enforce the law is further limited in northern Burma by active conflict, leaving the Burma Army—an institution with a checkered track record on human rights and transparency—best positioned to police the timber trade.

In the Myawaddy-Mae Sot border area, a degree of cooperation between governments has helped reduce the flow of illegal raw timber from Burma to Thailand, though Aung Myo said smugglers still use cover of darkness to send some unprocessed logs across the Moei River, which separates the two countries.

“But now, the number of logs has significantly declined here because Thai police also make arrests if they see illegal timber trucks or personnel there, it’s not like in the past,” Aung Myo said.

Moe Nyo, a police officer in Myawaddy District, acknowledged that the Moei River is still a conduit for a small amount of illegal timber exports.

“Government policy is important. I agree with why the government has limited timber exports here—we’re facing serious deforestation, it was once very thick trees around here, not anymore,” Moe Nyo said.

The Burmese government has attempted to crack down on illegal trade by forming mobile team task forces made up of police, customs and Ministry of Commerce officials, and local authorities.

According to data provided by the Ministry of Commerce’s mobile team, more than $18 million worth of timber has been seized over a period from 2012 to late November of this year, with seizures concentrated in areas along the Sino-Burmese border.

“Actually, as far as I know, this amount that the mobile team seized is only 1 percent of the Forestry department’s total detained amount,” said Than Win, director of the Ministry of Commerce, an estimate that would put the total value of seized illegal timber at a staggering $1.8 billion.

“As far as I know, most of this timber was seized while going to China. The amount of logs to Thailand is very few, sometimes almost none,” Than Win said.

Unknown still is what effect the advent of the Asean Economic Community (AEC) next year will have on deforestation in Burma and the ability of local companies to compete in an increasingly competitive regional marketplace.

While the eventual goal is tariff-free exchange of all goods across the 10-nation bloc, Burma and three other Asean countries will have until 2018 to reach that point on some goods, including value-added timber products.

Given disadvantages that the country faces in competition with some of its more developed neighbors, Tin Cho, senior consultant of Parami Roundtable Group, said restrictions and bureaucratic red tape should be eased for value-added timber enterprises, making it a more attractive—and legal—alternative to raw timber exports.

Non-tariff measures could also be used by the government to protect these local businesses from external competition, said Tin Cho, whose organization gives awareness trainings about the AEC across the country.

“We lack technology to produce value-added, so the government also should promote it, as well as to encourage SMEs [small and medium enterprises]. We need better policy on it,” Aung Ko Ko said.

“The reason that raw timber is attractive is there are big market in other countries. If they produce value-added, it will to take time, money and technology, so they just go and smuggle illegal timber to other countries,” he added.

The issue is just one among a litany of challenges that will face the incoming National League for Democracy (NLD) government when it takes power next year.

“The new government has a great deal of responsibility, they will have to look at how to protect local industry as well as needing to change policy and ease processes,” Aung Ko Ko said.

Failing to deal with the problem could cost Burma, and not just in terms of its trees and unrealized tax revenue for government coffers badly in need of the funds.

“According to a study, there are around 20 million people living within a five-mile radius of forests and around six million people living along rivers [in Burma]. These people will suffer if the water and forests they rely on are depleted soon,” Win Myo Thu told The Irrawaddy earlier this year, as the country grappled with its worst flooding in recent memory. (END/Reporting ASEAN)