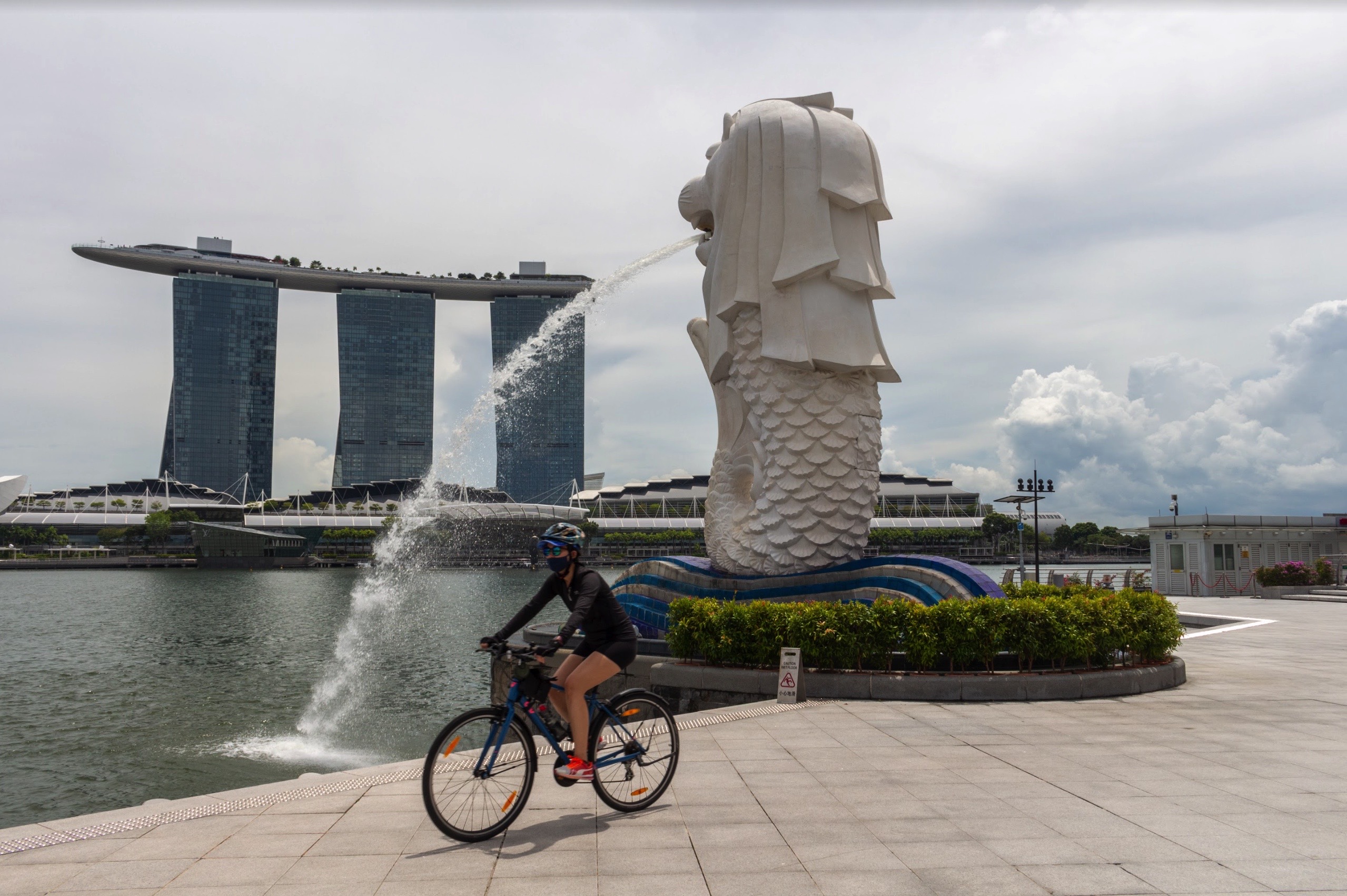 Home » Features » How Green Can Singapore Get?

How has Singapore been designing its path to a greener, more climate-friendly type of development, be it in the area of consumer lifestyles and public awareness, the finance ecosystem, and energy choices? Southeast Asia’s most developed economy has a context different from its neighbours. But how Singapore navigates the sustainability challenge is of interest and relevance to countries in the region.

Below is the first of four articles in the ‘Greening the Garden City’ story set. Read the second article here.

Singapore’s first-ever climate rally, despite its upbeat and social atmosphere, was undeniably an act of defiance. In a country where public protests are few and far between – and, for good measure, illegal in most cases – the 2019 Singapore Climate Rally stood out for its bold demands for climate justice, systemic change, and clear political action.

The rally at Hong Lim Park, attended by some 2,000 people, marked a rare dovetailing of collective activism and establishment support in this affluent city-state of 5.45 million people.

The event’s youthful organisers – almost all in their late teens and early 20s – were courted enthusiastically by the national press, who were keen to help ‘discover’ Singapore’s answer to Swedish youth activist Greta Thunberg. Interview features and podcast guest spots – uncharacteristic for activists and civil society actors used to being kept at arm’s length – gave the social media-driven Singapore Climate Rally a national spotlight and platform for its agenda.

The rally was also attended by members from the ruling People’s Action Party, such as then Minister for Social and Family Development Desmond Lee and Member of Parliament Louis Ng.

“Definitely, going in and afterwards, there was a bit of a fear,” recalls Ho Xiang Tian, an environmental campaigner who was one of the six speakers at the 2019 rally. “After I speak at Hong Lim Park, would there be like a black mark on me or something?” the co-founder of the green group LepakInSG remembers thinking. “[But] it was also very exciting, because the energy, the crowd was wild.”

The momentum galvanised by the 2019 rally quickly found its way to parliament. Environment-related questions in parliament increased almost threefold in 2019 from 2018, and green pledges were made in all major party manifestos during the 2020 General Election. Parliament formally declared climate change “a global emergency and a threat to mankind” in February 2021.

But over the last two years, the larger social impact of Singapore’s push for a greener path has been mixed.

While the ‘2021 Southeast Asia Climate Outlook’ Survey by the ISEAS-Yusof Ishak Institute found that environmental awareness and participation remains relatively high in Singapore at 90.2%, this is a slight dip from the 96.5% in the 2020 survey.

“In Singapore, if you don’t read the news at all, you can be forgiven for thinking that all is well and normal,” says Ho Xiang Tan, referring to the ongoing deadly floods in Malaysia and the destruction wreaked by Typhoon Rai in the Philippines in December. “We are just so well-adapted that people don’t even think that climate change is really affecting us.”

The world has also changed dramatically since the 2019 rally: the COVID-19 pandemic has upended sustainable development efforts globally, while carbon emissions have spiked after a brief but dramatic drop in the wake of the lockdowns in 2020. An Intergovernmental Panel on Climate Change (IPCC) report released in August warned that the Paris Agreement target to keep global warming below 1.5°C in this century will likely be breached within a decade.

With talk of ‘building back better’ around the world, what lies ahead for the city-state?

The Green Plan 2030 was unveiled in February 2021 as the centrepiece of Singapore’s response to the climate crisis. The 10-year blueprint – a compilation of “sustainability goals” addressing concerns ranging from urban planning, research and education, the green economy, to food and energy security – was touted as a “whole-of-nation movement” to “build back greener and better” after the pandemic.

The Green Plan was, in some ways, undeniably ambitious. Its goal to transform Jurong Island – Singapore’s offshore ‘fossil fuel haven’ and oil-refinery hub into a “sustainable energy and chemicals park” – by 2030, signalled a serious commitment to green the energy and chemicals sector, which accounts for 3% of the country’s GDP and some 20% of its total output.

In a November report, Singapore’s Economic Development Board further pledged to increase the island’s output of sustainable products by 1.5 times from 2019 levels, ensure that its oil refineries and gas crackers are in the world’stop quartile in terms of energy efficiency, and realise at least two million tonnes of carbon capture potential – all by 2030.

The vast majority of the plan’s targets, however, were neither entirely new nor ground-breaking. The goal of phasing out petrol and diesel vehicles by 2040, for instance, was an existing commitment from the government’s 2020 budget package. Another target to ‘green’ 80% of Singapore’s buildings by 2030 has been on the books since the first Sustainable Singapore Blueprint that was released in 2009.

“I do think it is useful to have all the initiatives that the government has announced before, and has recently just launched, in one plan, so that it is easier to track these metrics. And it is also easy for the public to go through the list and comprehend what the overall roadmap is for Singapore,” says Estella Ho, founding member of the SG Climate Rally advocacy group.

“Everything else, it really is either sort of underwhelming, or a repackaging of previous announcements,” she adds. “Nothing wrong with that, but just that it was marketed as a bold new plan for Singapore to follow, and that really wasn’t the case. So it was a bit of, I guess, false advertising there.”

Outside government circles and beyond high-profile events, campaigners say the work continues around building more awareness and action among the public about sustainability issues.

Outside government circles and beyond high-profile events, campaigners say the work continues around building more awareness and action among the public about sustainability issues.

“I think there’s been a real shift from a ‘mobilising’ sort of activism, which is what we saw with the 2019 rally,” says Estella Ho, referring to the group’s transition from an event-based movement to one focused on advocacy.

Holding major events takes up time, energy, and resources, she explained. “So we’ve shifted to more strategic, ‘organising’ of activism because I think that’s what really sort of builds the momentum and galvanises people, and creates a sort of broad-based public support that we are trying to achieve.”

Asked if SG Climate Rally or any other green groups were consulted in the Green Plan’s formulation, Ho acknowledges that the government’s enthusiasm for the group has cooled considerably since 2019. “They have been less willing to engage us over time, because I think from both sides we feel like the conversation won’t get anywhere.” The group’s detailed evaluation of the Green Plan also did not receive an official response.

The Green Plan’s aim of “working with communities and non-governmental organisations (NGOs) to develop programmes to allow humans and wildlife to live in harmony” is unlikely to be any sort of olive branch in this regard.

“What goes on the government’s lists of NGOs and communities to invite to participate in these sort of consultations would be groups that they view as very benign,” says Estella Ho. “I would not fall under that category, and I think a lot of activist groups in Singapore wouldn’t either.”