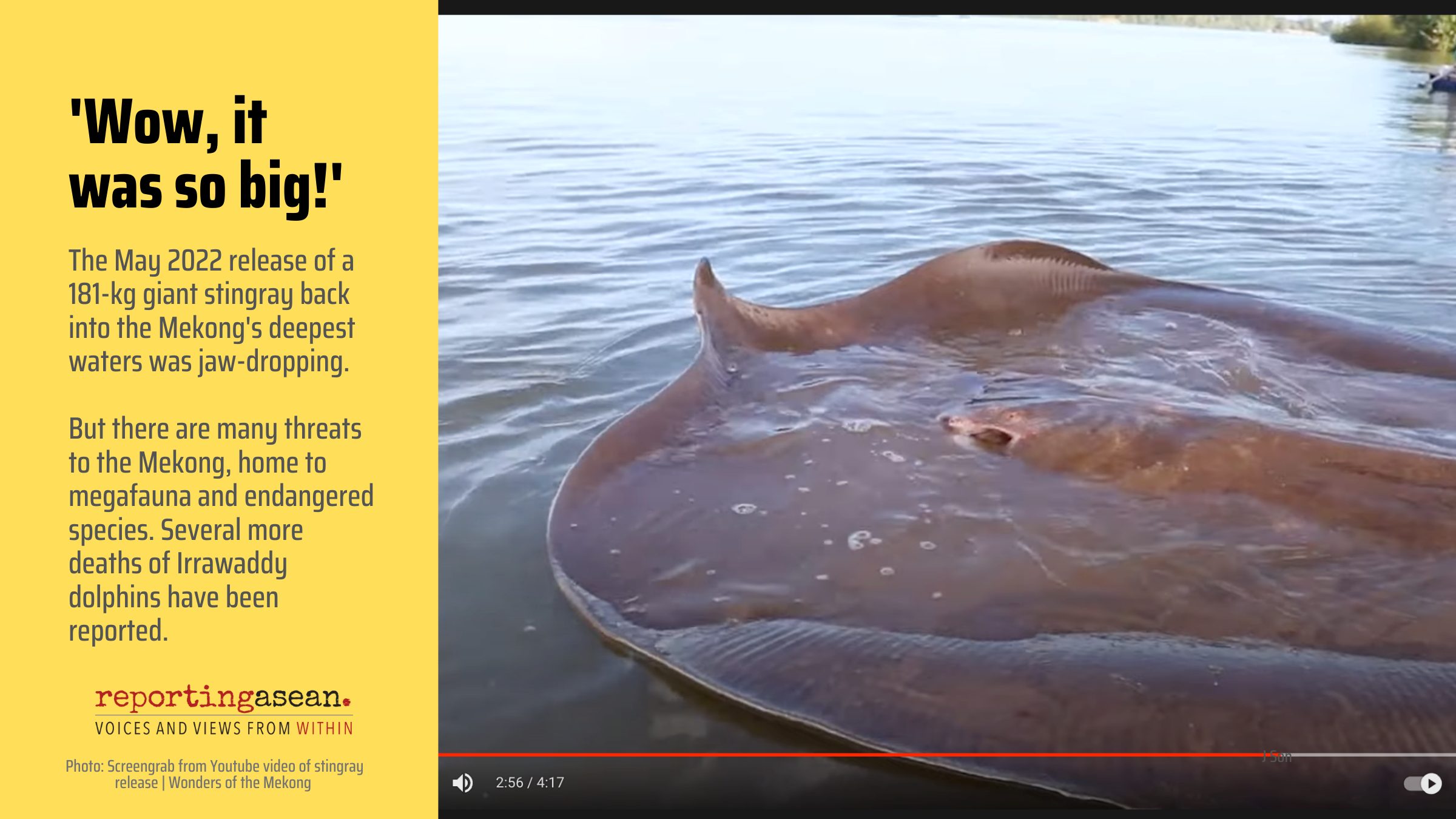 Home » Features » The Giant Stingray: A Reminder of the Mekong’s Bounty — and the Risks It Faces

Before she took part in the release of a 181-kilogramme giant stingray back into the Mekong River in May, Chea Seila had only seen parts of it – sliced and on sale in local markets in Cambodia.

“Wow, it was so big,” exclaimed Seila, a conservationist who works as project coordinator with the Wonders of the Mekong project, recounting the 5 May release at a webinar by the US-based Stimson Center later in the month.

The release of this endangered stingray, which had been incidentally caught by fishers in a remote part of the northeastern Cambodian province of Stung Treng, was big news in Cambodia and globally. The 3.9-metre long stingray had been caught in the waters near Koh Preah village, a small island in the Mekong that has nearly 28-meter-deep pools nearby.

The event drew attention to the bounty that makes the Mekong River invaluable to Southeast Asia and the world. But it was also a reminder of what could be lost amid threats to this region, ranging from hydroelectric dam development, overfishing, habitat loss, pollution and degradation, and changes in climate.

As the villagers and researchers released the stingray, the commune chief told the children who were watching on that “this is the giant stingray that (is) better to protect, so your children can (still) see it in the Mekong”, Seila recalls.

The stingray, one among many megafauna in the Mekong, live in the pitch-black waters of deep pools of nearly 80 meters in a thriving world unseen by human beings. It is here where species big and small spawn and where one of the world’s biggest animal migrations occur each year, a phenomenon that is intertwined with the season flows of the Mekong river system.

Beyond a depth of 10 metres, “it’s completely dark, totally silent and it’s a world totally apart from the world that we live in”, said Zeb Hogan, director of the Wonders of the Mekong project and a research biologist at the University of Reno in Nevada, United States.

“This area is the last place in the world where all of these megafauna, these endangered aquatic megafauna are found together, “Hogan said. “This is an incredibly important and special area.”

These pools, which are the deepest parts of the Mekong, are said to the last habitat of the world’s largest freshwater fish, many of them endangered. Apart from the giant stingray, the giant barb, giant softshell turtle, the Mekong giant catfish and the last population of the critically endangered Irrawaddy dolphin are found here.

The Mekong River is home to 1,000 species, including diadromous ones that spend parts of their life cycles in freshwater and marine saltwater environments.

Weeks before the stingray’s release, Hogan’s team had been on an expedition that used unmanned submersibles to study the largely unexplored deep pools of the Mekong, also in the area between Kratie and Stung Treng provinces toward Cambodia’s border with Laos.

What ‘National Geographic’ calls “one of the most incredible animal migrations on the planet” begins in late September or early October, as the rains end and floodwaters of the swollen Tonle Sap lake, which bring water and fish to Cambodia and Vietnam through the Tonle Sap river and then the Mekong River, ease.

With big species like giant catfish and giant barb leading in a migration that experts say takes four to six months, huge numbers of fish travel 1,000 kilometres or so from the Tonle Sap river near Phnom Penh, up the Mekong River and to the deep pools in the Cambodia-Lao border.

Spawning occurs in these pools starting from May or at the start of the rainy season, a process that sees the production of at least 200 billion small fish.

This natural cycle is crucial to the Mekong river system, which feeds over 300 million people, provides livelihoods to millions and is a key part of culture such as Cambodia’s Water Festival. Local fishers have long known the river’s rhythm, even if the migration and breeding patterns, especially of big species, lack study because they live in the deep.

Indeed, the release of the giant stingray affirmed the value that local commitment plays in nurturing a balance among food security, livelihood and biodiversity.

Next to where the Wonders of the Mekong team were based in this year’s expedition was a fish reserve that the local community had set up near the deepest spot of the Mekong in this part of Stung Treng. For years now, fishing with the use of commercial or bigger gear has been closed from the start of the spawning season in May.

It was the locals, who were also part of the research, who called Seila about the catch of the giant stingray.  “Trust has to be with us and also with the fishermen,” she said. “It is very important.”

Discussions about the management of fish species have built relationships that make for a joint research and protection effort.

“The fisherman (who caught the stingray) was proud of himself, that he supported the release back (of) the stingray because we do research with them,” Seila said, adding that “(his) family is proud (too) that they can contribute to conservation.” Since the giant ray’s release, the Wonders team has received photos of locals’ releases of other incidentally caught fish.

In 2021, Seila recalls, she got a call from a fisher who had caught five giant fish that they wanted to release back into the Mekong. This is different from the past, Seila says, when locals tended to keep captures of megafauna to themselves, and usually just chop them up to sell at the market.

But much more is needed to look after Mekong fisheries, since the nearly 5,000-kilometer river runs through six countries from the Tibetan plateau in China to Vietnam’s Mekong Delta.

Two challenges are often discussed in relation to the Mekong— around dam construction in different parts of the river and fishing pressure, including declining fish catch and overfishing.

Changes in the hydrological regime are disruptive to Mekong fisheries because they are highly migratory and their life cycles require the river’s natural rhythms. They are very vulnerable to habitat fragmentation, including that caused by hydropower projects, explains Hogan, who is also host of NatGeo’s Monster Fish show.

The Mekong River’s deep pools are described as the last habitat of the world’s largest freshwater fish, many of them endangered. These include the last population of Irrawaddy dolphins.

For instance, Hogan explains, Mekong catfish used to migrate up through the Khone Falls further north in Laos, “but migration is now problematic because of a dam at the falls”. The Don Sahong dam is in the Hou Sahong channel of the Mekong mainstream in Laos’ Khone Falls, home to several fish-migration pathways near the Lao-Cambodia border.

“Some species, like catfish or eel, migrate about about one thousand kilometres to get to the spawning grounds, so hydropower can block their migration routes,” said Vi Vu An, a freshwater fish ecologist with the Inland Fisheries Research Group. “If something happens with the hydrological regime, they might not know when they migrate and where they migrate.”

Giant species do not recover easily. “They live very long, like to a decade or century and they produce very few eggs. The stingray, I think, give birth to one cub per season,” he added.

Some 400 dams of various kinds are in the Mekong basin, says Brian Eyler, head of the US-based Stimson Centre’s programmes on Southeast Asia and energy, water and sustainability. While Mekong fisheries remain robust, he says that “the system is a critical point” with “the next round of development of dams and just the repetitions of migratory patterns depleted, given the dams that are already there”.

Reports of declining fish catch in the Mekong region are common.

In interviews with Mekong Delta fishers that started six years ago, more than 90% said their catch has been going down and attributed this to “illegal fishing or fishing pressure”, Vi Vu An explains. Mekong fishers report catching 2-3 kg a day, down from 10 kg a day in the nineties, Hogan says.

There have been several reminders of the threats to the Mekong within this year, in events quite unlike the happy tale of the giant stingray’s release.

A wounded Irrawaddy dolphin was found dead on 12 May downstream of the Kampi deep pool in Kratie, the third adult death reported in the first five months of 2022. The deaths of two calves in Cambodia were also reported this year.

On 15 February, the last Irrawaddy dolphin that had lived in the transboundary pool at the Lao-Cambodia border, was found dead off Kaoh Lngo island, Preah Romkel commune in Stung Treng.

The emaciated dolphin had been unable to swim well enough to hunt after its tail got entangled in fishing gear that is banned in conservation areas in Cambodia but which remains a major cause of dolphin deaths. This last dolphin had been alone since early 2021, news reports said.

“This death most likely represents a national-level extinction for Laos,” World Wildlife Fund-Laos said. The Irrawaddy dolphin was declared functionally extinct in Laos in 2016, when only three dolphins were left.

In 2020, Cambodian fisheries officials reported the Irrawaddy dolphin population at 89 in a 180-km stretch of the Mekong in the country’s northeast. An estimated 32 dolphins – they are a popular attraction for visitors – are elsewhere in Stung Treng.

(This is part of Reporting ASEAN’s Sustainability Series, which is supported by the Heinrich Boell Foundation Southeast Asia.)

Watch ‘Go, Nuoc!’ here — an animation around the Irrawaddy dolphins.