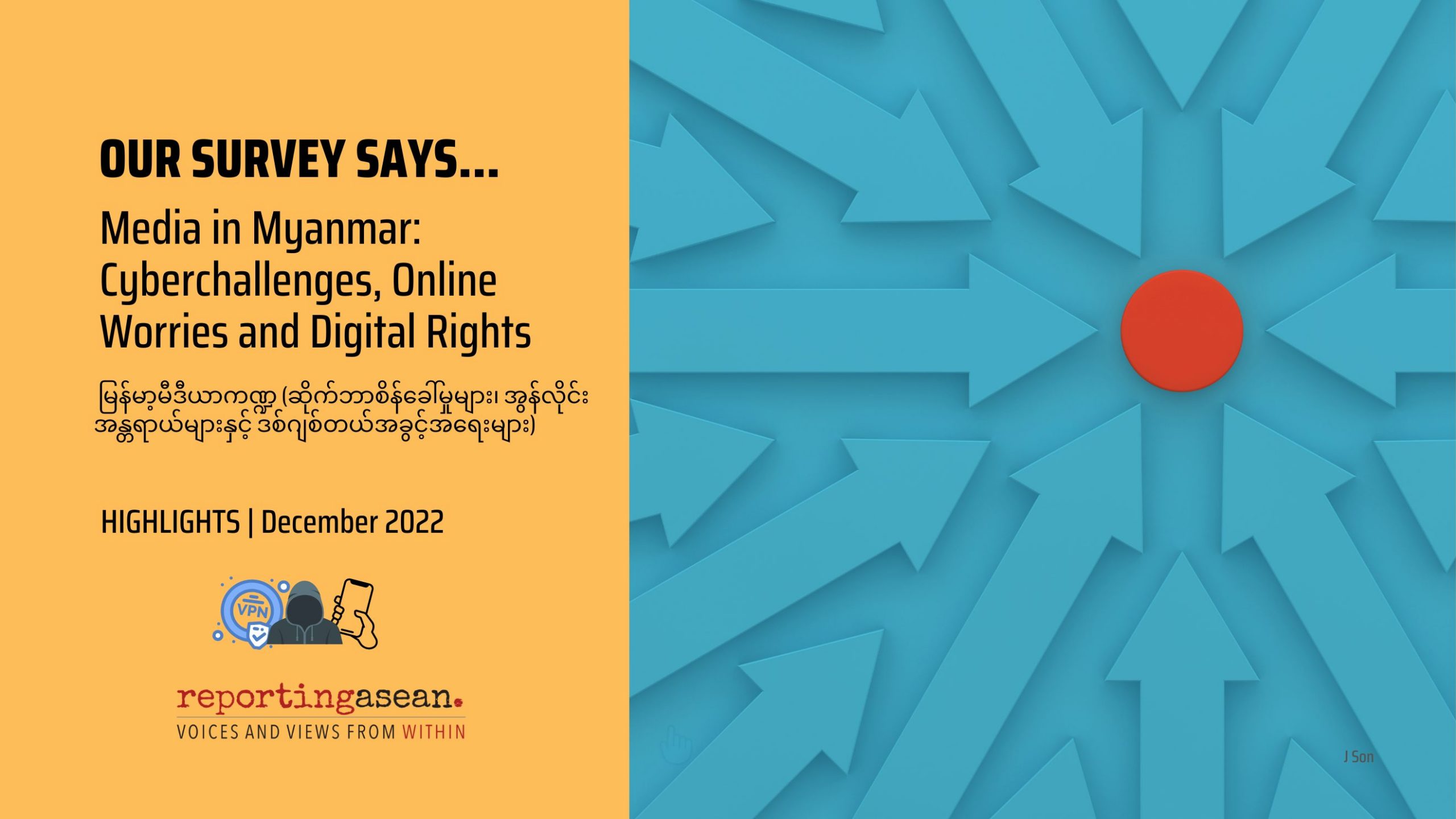 More than half of Myanmar’s journalists say they have experienced attacks or threats in online spaces. About nine out of 10 among them, especially those inside the country, feel they are vulnerable to these as news professionals continue to be arrested and prosecuted by the military regime that took power in a 2021 coup.

Majority have had some training on digital safety, but the range of more secure tools they use is limited – and exclude many of the safer-by-default options available today.

These are the key takeaways from a survey of 86 Myanmar journalists that the Reporting ASEAN series carried out from September to October 2022, in a project that was supported by an international organisation.

Through an 18-item questionnaire, the survey delved into the journalists’ perceptions and understanding of digital safety and risks online, their online habits and practices as well as their experiences around online hostility against the backdrop of media repression, and protracted political and armed conflict, in Myanmar.

As one reporter-respondent put it, “The media I work with receives threat messages every day.”

Before the February 2021 coup, concerns were already widespread about hate speech, harassment and polarisation in the digital spaces of Myanmar, a country that found itself thrown into the internet age after decades of military rule and isolation. Since the coup, the online world has been a theatre of conflict between the military’s State Administration Council and its allies, including pro-junta influencers, and those opposed to and fighting the junta, among other political actors.

“I received a death threat via (Facebook) Messenger for a news story I wrote,” said one journalist. “Let’s see if you can run” is a threat that one editor received.

In an environment that often gets toxic, it has been far from uncommon for journalists, including some of those who took part in this survey, to experience, or hear of, attacks, threats or aggression through chat applications like Facebook Messenger or Telegram, comments on social platforms or through short messaging service (SMS).

Twenty-two percent of all survey respondents said they have received cyberattacks and 36%, threats. Taken together, these two figures make for a majority or 58% who have either been attacked or been threatened online at some point in their news careers.

There is more: Many more journalists (69% of all respondents) know of a colleague who had been attacked, and a slightly bigger proportion (70%) know of a Myanmar news website that has received attacks or threats in cyberspace.

“My media outlet’s logo was slandered in the military’s propaganda mechanisms such as pro-military Telegram channels,” one editor-in-chief said. Another journalist recalled: “My media organisation’s page was faked with a profile picture of people in military uniform.” At least four said that their real names had been posted in social spaces and that they had been called names such as ’traitor’ or ‘prostitute’ – one said his photo had been circulated too.

Several journalists believe there have been multiple attempts to hack their Facebook or Gmail accounts, citing their receipt of text messages with one-time-passwords when they were not logging in. A chief editor recalled seeking Facebook’s help to regain access to his account, concluding that he had gotten locked out after too many attempts by unknown persons to get into it.

Hostile cyberactivity around news work has become common in messaging spaces, especially around social media, judging from the respondents’ descriptions.

“I received a death threat via (Facebook) Messenger for a news story I wrote,” said one journalist. “Let’s see if you can run,” an editor was told. “Pro-military users wrote posts instigating to arrest/harm my family members, claiming knowledge about their location,” another recalled.

While Myanmar journalists typically use pseudonyms, one editor said: “We usually read comments under our news posts such as ‘these reporters are just fanning the flames’, ‘they should be killed if caught’ and ‘it’s time this news media (outlet is) gotten rid of’.”

Some journalists recounted harassment by both pro- and anti-junta groups, as well as armed groups.“An armed group asked me to take down a news story, with death threats if I failed to do so,” an editor-in-chief said, and another journalist recalled that an ethnic armed group was “mad at me” because of a story.

In Myanmar’s online spaces, individuals who interact with journalists often feel unsafe too. One journalist recounted how a source warned him of consequences “if something happens to me from my answers to you”.

What are the three “most worrisome challenges” for journalists working in Myanmar? From a list of nine options, the survey respondents chose “leaks of personal/private data through telecom/s providers” (57%), followed by “internet shutdowns, including in areas of conflict” (56%) and the “higher cost of SIM cards, mobile internet and internet services in general” (37%).

Two challenges tied for the respondents’ fourth most-chosen replies for most worrisome challenges for journalism in the country – 36% of them selected “hacking of accounts” and an equal proportion chose “lack of data protection laws”.

In this kind of environment, one reporter said, it is best to keep activity in public online spaces to a minimum: “I always keep a low profile in public.”

Ninety-two percent of all journalist-respondents, located inside and outside Myanmar, said they were vulnerable, in varying degrees, to cyberattacks and online threats.

Significantly, 40% of all respondents described themselves as “very vulnerable” to digital attacks and threats. Thirty percent chose the option “extremely vulnerable” when asked to select their degree of vulnerability from a range of 1 to 5, with 5 being the highest level. Twenty-two percent chose 3 or “vulnerable”.

There was also a higher proportion of Myanmar-based journalists describing themselves as “extremely vulnerable” (40%), compared to 24% among those outside the country.

Asked to choose three “most common” cyberspace challenges from a list of nine options, 85% of all journalist-respondents identified the top one as “surveillance/targeted surveillance, including through social media accounts”.

Tied for the respondents’ second choices were “internet shutdowns” and “cyberbullying, online harassment/threats, hate speech or digital smear campaigns”, each of which was selected by 55% of respondents. Third was “hacking of email, social media accounts” (47%).

The survey responses conveyed useful data about the types of digital attacks and threats that reflect Myanmar’s development and technological realities, which vary from, say, the nature of such in other Southeast Asian countries, or other forms of more ‘sophisticated’ online warfare such as that around the war in Ukraine.

How close to journalists’ daily lives are online attacks and threats? Twenty-two percent of all respondents said they have personally received such attacks, while 36% said they had gotten threats.

Asked who they think is most likely behind the aggression in Myanmar’s digital spaces, 77% chose “military/intelligence groups” from a list of six options, 15% chose “informers”, 6% said “cybercriminals, hackers”, and 2% ticked “government agencies”.

Asked to assess their level of confidence in their knowledge/skills around safer ways of using online spaces and tools for news, 78% of the respondents said they had either “average”, “high” or “extremely high” confidence.

At the same time, majority or 59% of respondents said their reporting skills are better than their skills around digital issues for work. Just one-third (33%) rated their proficiency in reporting and in digital tools/issues as “more or less equal”.

The survey also had journalists share how they assess the safety levels of their tools. They were asked to choose one among five options, ranging from not really knowing if these are safe/secure all the way to “all or nearly all” of their tools being safe/secure. To this question, 43% of all respondents picked the middle option of “some of the tools I use are safe/secure, but not all of them”.

Three survey questions asked respondents to identify the particular tools they use – for browsing the web, for email and for doing various online tasks.

Among email products used by the journalists, Google’s Gmail was the one most popularly used by 93% of all respondents, with Microsoft Outlook a distant second at 13%. Just 10 to 12% of respondents said they use encrypted email services.

The survey also asked the respondents to identify which among 12 options for tools and applications, related to better safety online, they use. Among these, the three tools most popularly used by the respondents were a particular encrypted messaging application, two-factor authentication for email accounts, and VPNs or Virtual Public Networks that mask a user’s IP (Internet Protocol) address, online activity and identity.

Eight out of 10 journalists say they have undergone “training or briefing around digital security, safer digital habits and tools, safety precautions related to news work in online spaces”. Among those who have had training, majority (61%) reported that they took part in this activity before the 2021 coup and 39% said they had theirs after.

*Johanna Son is editor/founder of the Reporting ASEAN series.