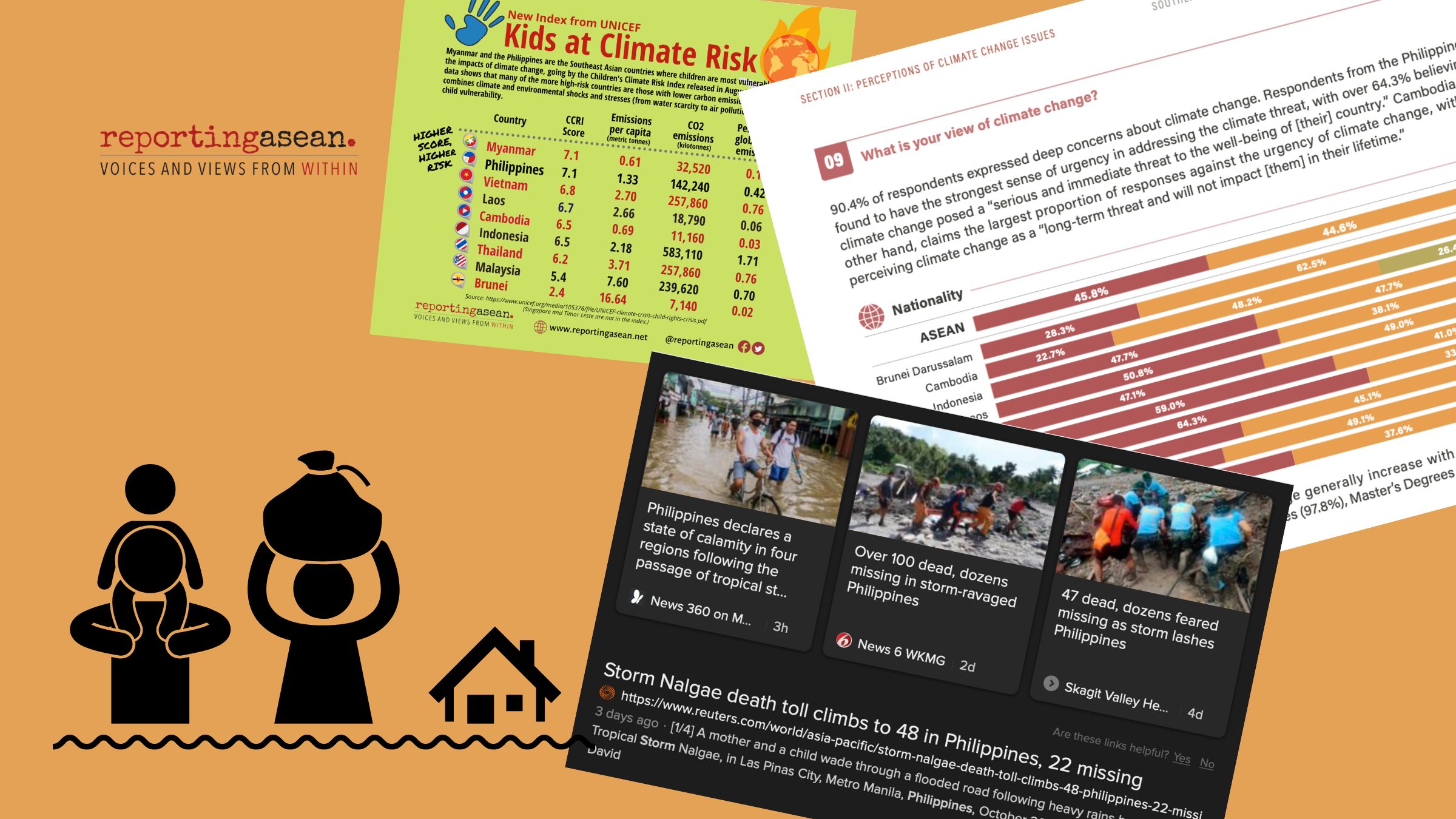 Home » Features » Filipinos Most Worried About Climate Change, But Unaware of Policies

Filipinos are the ones most worried about climate change in an ASEAN-wide survey. But they also have the biggest proportion of respondents who mistakenly think that their country has a target for reaching net-zero emissions of carbon dioxide, the main greenhouse gas that contributes to global warming.

This mix of perceptions is reflected in the findings of the 2022 Southeast Asia Climate Outlook Survey,  which the Singapore-based ISEAS-Yusof Ishak Institute conducted among 1,386 respondents from ASEAN’s 10 member countries in June-July this year. Filipinos made up the largest group, or 14.9%, of the respondents, followed by Singapore and Malaysia in the third year of annual survey.

A total of 64.3% of Filipino respondents said they found climate change to be “a serious and immediate threat to the well-being of my country”, followed by 33.3% who found it “an important issue that deserves to be monitored”. Together, these total 97.6% of respondents for whom climate change was a major worry.

After the Philippines, Myanmar had the next highest proportion of respondents who judged climate change to be a serious, immediate threat at 59%, followed by Laos (50.8%).

Likewise, when respondents were asked to what extent they think climate change will “negatively affect your life in 10 years’ time”, those from the Philippines ranked the likelihood of climate impacts in their lives at 8.4 out of a scale of 1-10. This was the highest among all 10 countries in the survey, and showed that Filipinos have “the strongest sense of urgency in addressing the climate threat”, the survey report said.

A total of 45.8% of survey respondents from 10 ASEAN countries said climate change was a serious and immediate threat and 44.6% described it as an important issue to follow.  The top climate impacts they identified are floods, followed by heat waves and rainfall-induced landslides.

The Philippines’ level of concern is far from surprising given that it typically ranks among the highest in the world, and in Southeast Asia, when it comes to disaster risks, due to factors that such as its geography, vulnerabilities, a changed climate and challenges in preparing for handling disasters.

Two destructive typhoons roared through the Philippines in the last two months. In late October, “severe tropical storm” Nalgae (named ‘Paeng’ locally) caused at least 150 deaths, affected almost 4 million people affected and widespread damage, including flooding and landslides, across all 17 of the country’s regions, according to the government’s data in early November data. In September, typhoon Noru (‘Karding’) led to the deaths of 12 people and caused agricultural damage of 2.02 billion pesos (34.5 million US dollars).

Supertyphoon Rai (Odette), the strongest typhoon to hit the Philippines in 2021, caused 408 deaths and was among the deadliest disasters globally of that year.

In the ASEAN region as a whole, 45.8% of respondents said climate change was a serious and immediate threat and 44.6% described it as an important issue to follow.  The top climate impacts they identified are floods, followed by heat waves and rainfall-induced landslides.

However, Southeast Asians’ awareness of climate change does not appear to mean they are familiar with the details of their countries’ policies and actions.

To the question ‘Does your country have a net-zero target?’, majority (61.3%) of all respondents were unsure if their country had this in its commitments under the 2015 Paris Agreement, or the international treaty on climate change. A total 31.5% of all respondents had correct answers to this question, and 7.1% had incorrect ones.

Apart from the Philippines, Myanmar is the only other ASEAN country without a net-zero target. All the others have targets for reaching carbon neutrality by 2050 to 2065, with Cambodia being the latest country to pronounce its commitment.

In its latest Nationally Determined Contributions  document dated 15 April 2021, the Philippine government pledged a 75% reduction in greenhouse gas emissions by 2030. Nearly three-fourths of its commitments, or 72.29%, are conditional, dependent on the “support or the means of implementation under the Paris Agreement.”

But while their government has not set a net-zero target timeframe, a number of Filipino business conglomerates, such as Nestlé Philippines and Ayala Corp, have gone ahead to commit to carbon neutrality by 2050.

Awareness about the Philippines’ major climate commitments varied among several interviewees for this article.

Dely De Leon, 67, a Filipino rice trader and plantation owner, was initially unfamiliar with what the “net-zero campaign” is, but agreed, after it was explained, that it should be part of the country’s climate actions.

“I am not aware if there is [a net-zero target], but if that is what every country is doing, especially in Asia, we cannot be left behind. We should also have one, especially since we are an agricultural country. We should contribute to improving the atmosphere so that global warming would not worsen,” De Leon said, speaking in Filipino.

“I think there is. I’m not sure,” Johanna Lindsey Pasco, a computer engineering student, replied when asked if the Philippines has a net-zero target. She said she did not hear about the Philippine position on this issue in news articles that she gets mostly from environmental pages on social media. Still, she thought there “must be” one.

Darleine Bautista, an international relations major in university, had learned about the Philippines’ climate policies,including its lack of a net-zero year commitment, in an undergraduate environmental law class.

Both Bautista and Pasco recalled while that climate change had been discussed in secondary education, this did not include country’s climate actions and policies.   “Perhaps this is a rise to the call of re-evaluating the curriculum, in a way where Philippine national policies on the environment can be explained to adolescents in a way that they can truly comprehend,” Bautista said.

A “big international campaign” like carbon neutrality is more “complicated” than initiatives such as coastal cleanups where personal participation is more obvious, says Kairos Dela Cruz, deputy executive director of the non-government Institute for Climate and Sustainable Cities.

Still, 72.5% of the Filipino respondents in the ‘Climate Outlook Survey’ agreed that the country should have a net-zero target. Interestingly too, Filipinos’ top two choices for the “biggest obstacle to decarbonization in my country” are “insufficient financial resources” (56.5%) and “absence of political will (53.6%).

The latest global report to identify the Philippines as high-risk in disasters, where extreme weather events increasingly play a role in, is the World Risk Report 2022. In its World Risk Index, the Philippines has the highest risk of disasters among 193 countries at 46.82 on a scale of 0 to 100.

It was one of four ASEAN countries in the top 12 nations that ranked highest in the index, which calculates risk from exposure and susceptibility to disasters as well as vulnerability and lack of coping strategies.

The Philippine responses in the Southeast Asia climate survey provide insights about public opinion around the responsibility for climate action, obstacles to it and what they would like the Philippines, and ASEAN countries, to do.

Filipinos appear to support having a carbon tax, cutting reliance on coal and other fossil fuels (which the region will continue to rely heavily on), but also assign more responsibility to the government, business and other groups instead of on individuals.

How willing are they to accept a carbon tax for the climate, on a scale of 1 to 10? Filipinos expressed the highest level of willingness in the region, at 7.2. Cambodians were the next most agreeable to carbon taxation at 7, followed by Thailand’s 6.9.

At the same time, Filipino respondents assigned the biggest responsibility to tackle climate change to the national government (29.1%) as well as the private sector (22.7%). Individual responsibility comes in third at 19.8%.

Asked who should bear the greatest cost of climate change measures, Filipinos chose the national government (38.9%) first, followed by business and industries (30.2%).

Climate change or the climate emergency are already big terms whose details and linkages to daily life, apart from international commitments, can be a challenge to follow.

But Dela Cruz says that the Philippines’ continued pursuit of fossil fuel as an energy source does not help in making the public aware of climate change impacts. “You can’t put the pressure on people to understand [the] importance of transitioning to better industries, to sustainable energy – and yet you have a government that’s actually taking its time and keeps on toying with diesel and coal and natural gas.”

He attributes the country’s gap in converting policies to implementation to a “fixation” on disaster-centric narratives that can overlook slow-onset events such as sea-level rise, increasing ambient temperature and erratic precipitation levels, thus limiting the understanding of climate change.

“In our view, the biggest campaign that we can take part [in] at this point, nationally, is to make local governments and local communities understand what climate change is and vulnerability itself,” Dela Cruz said.