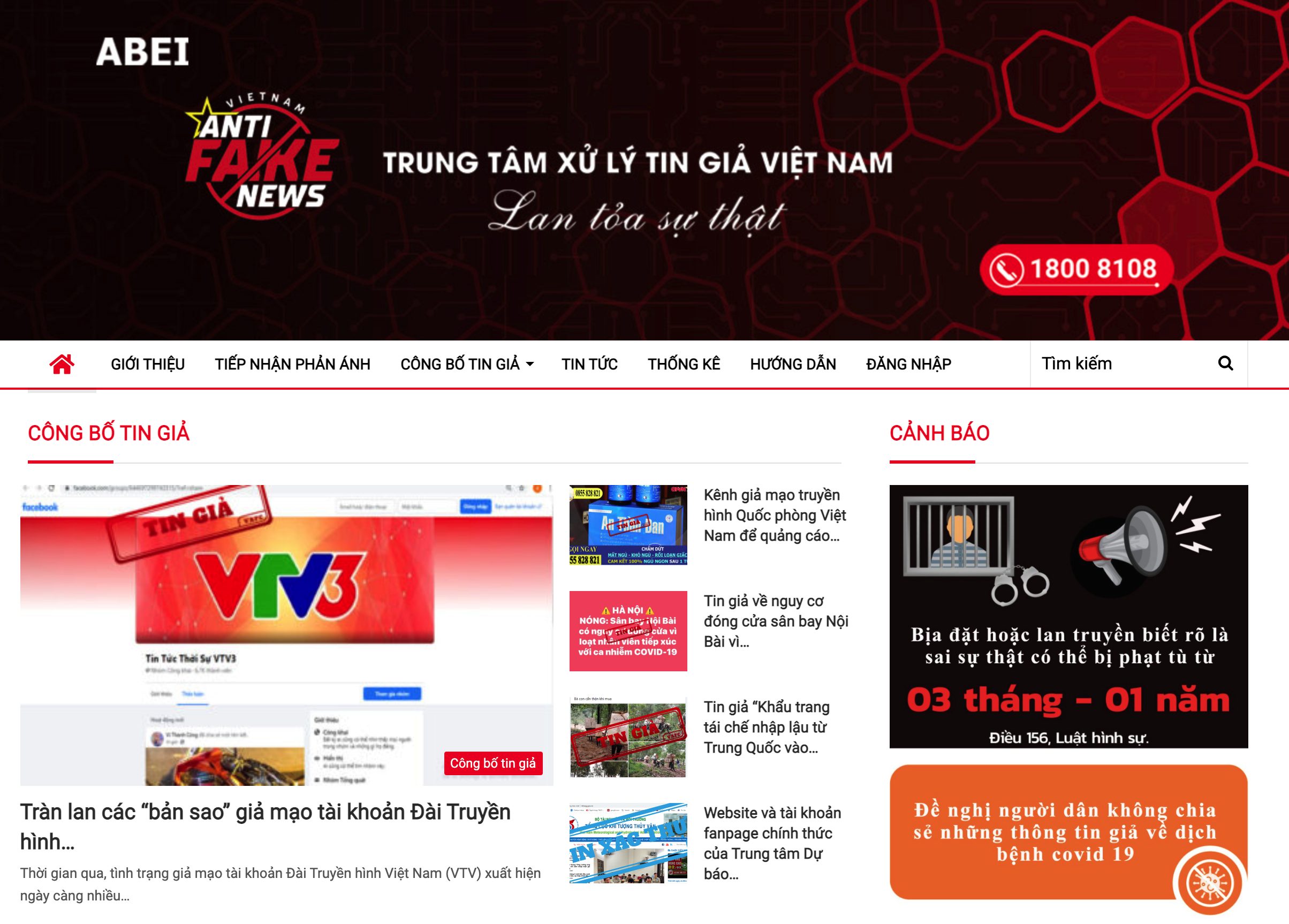 “Fake news are created by humans. Thus, only humans can recognize and solve this issue.” This motto appears on the website of Southeast Asia’s newest fact checker – the government-run Vietnam Anti-Fake News Center.

Since going live on Jan 12 this year, it has been busy selecting and correcting misinformation, disinformation and manufactured news and information, mostly related to COVID-19 in this country of nearly 97 million people.

Just two weeks after its launch, as Vietnam saw the fourth wave of local virus transmissions during its XIII National Party Congress, the center got a taste of how fast false information spreads. Right after news emerged that one of the first two cases – Patient 1553 – had been reported in northern Quang Ninh province – ‘fake news’ in the form of a fabricated document purporting to be from government authorities spread across social media.

Almost daily, the anti-fake news center’s website carries the false and wrong content it identifies. Some of these are shared by the Vietnamese government’s Facebook page called Thông tin Chính phủ (Government Information), which has been alerting the public to false information such as rumours claiming that the Noi Bai international airport in Hanoi may be closed.

The Vietnam Anti-Fake News Center has arguably the largest-scale initiative to date in correcting false or wrong information in the country, doing so by adapting its fact-checking method to the realities of a media environment where news organizations come under the state. The center works under the Authority of Broadcasting & Electronic Information of Vietnam (ABEI), which falls under the Ministry of Information and Communications.

The center’s website categorizes the false information that it flags into eight topics from policy/law to disasters/epidemics. However, it rarely states explanations for these or quotes sources.

Vietnam has not had independent and professional fact-checking organizations similar to those found in other countries, said Minh Le, vice president of the Vietnam News Agency. The Vietnam Anti-Fake News Center does not fall into this category as well.

As a professional skill, fact-checking involves the independent verification of the accuracy of content and statements by public figures, major institutions, and other widely circulated claims, using standards and methods agreed upon among the fact-checking community.

Vietnam has not had independent and professional fact-checking organizations similar to those found in other countries.

“Even news agencies have just been aware of ‘fake news’ issues for two years and produced articles to warn the situations, yet (they were) not creating fact-checking or information verification projects,” Minh Le said in an email interview.

Vietnam News Agency has its own Factcheckvn project on the video platform TikTok, which it launched in March 2020. The Vietnam Anti-Fake News Center and Factcheckvn are the most well-known efforts at fact-checking and verification of information in the country.

THE START OF SOMETHING. . . NOT REALLY NEW

A total of 600,000 pieces of information about COVID-19 spread through social media platforms in Vietnam from the pandemic’s start in January to mid-March 2020, the Ministry of Public Security  reported. During that same period, it addressed 654 instances of false information.

Misinformation increased by 50% in recent months till late December, compared to those months in 2019 before COVID-19, Minister of Information and Communications Nguyen Manh Hung said in an article carried by the anti-fake news center. He added that Vietnam’s national cybersecurity monitoring center “handled about 35,000 bad, malicious and false news on social media and internet platforms”.

Ngan Giang Nguyen, chief of the lifestyle desk at Zing.vn, says that COVID-19 hoaxes have become more sophisticated. “Initially, they came from status updates by text. Later on, they became fake government documents, or went from a normal user to celebrities or key opinion leaders sharing hoaxes,” she explained.

Since contact tracing and zoned lockdowns are Vietnam’s most effective containment strategies against COVID-19, most viral ‘false news’ have been around which locations COVID-19-positive people have been to and claims about locked-down areas.

The content reviewed by the Factcheckvn project in 2020 was mostly related to the pandemic as well, says Minh Le, who is also manager of this initiative.

He said he chose to set up a TikTok platform for Factcheckvn in order to target young people. Used by 47.6% of internet users in Vietnam. It was also the most downloaded mobile application in Vietnam in 2020, according to the ‘Digital 2021 Reports’.  As of Feb 12, Factcheckvn’s TikTok account has reached over 76,000 followers, 292,000 likes and nearly 7 million views – figures that are quite high for non-entertainment content.

In Minh Le’s view, there is no fixed formula behind the creation of ‘fake news’. They can be silly pieces of content that become viral, or multi-layered and sophisticated ones, and even start from jokes.

The most popular COVID-19-related ‘fake news’ touch on the origin of SARS-CoV-2, its transmission and treatment, as well as conspiracy theories about it being made in a Chinese laboratory, said Khoi Nguyen, a reporter for the Real – Fake section of the Ho Chi Minh City-based ‘Tuoi Tre’ newspaper. “Since the coronavirus is novel, sometimes we cannot fact-check but can provide neutral information with trustworthy multiple sources to the audiences,” he said. “I think we can fight ‘fake news’ that way too.”

In its Real-Fake section, which started in 2017, ‘Tuoi Tre’ identifies false information in Vietnam and overseas that are of interest to local audiences. More than using the standard fact-checking methods of labelling content true, false or misleading, and then relaying the correct versions, this section focuses more on delivering accurate, objective, multi-dimensional information, Khoi said.

Given the misinformation in online venues, more audiences have gone back to reading newspapers and similar news products, both directly and indirectly through other platforms, he added.

Visits to Zingnews hit 92.3 million in August 2020, compared to subsequent traffic of just around 69 to 76 million visits.

Thanh Nien’s YouTube channel reported a jump in subscribers in February 2020, when the country reported its first COVID-19 infections, according to SocialBlade, which monitors YouTube traffic. During the week Jan 27 to Feb 8, the newspaper gained 160,000 subscribers and over 83 million views, far above the usual 10,000 to 20,000 new subscribers per week, and less than 25 million views.

Agreeing with Khoi, Minh pointed out that the media’s doing fact-checking work should help address the trend of audiences’ declining trust in newspapers and news outlets.

“Initially, we have to view it (fact-checking) as a vital journalism task to do, not considering the benefits (to us) or just implementing it according to orders. We ourselves have enough well-trained staff and financial resources to fact-check,” said Hung Do, head of the video department of ‘Thanh Nien’ newspaper.

For him, what some news outlets like ‘Thanh Nien’ are doing amount to fact-checking, but through journalistic articles. Other outlets also report on false information such as the Feb 7 rumour about 20 COVID-19 cases at the Tan Son Nhat airport in Ho Chi Minh City.

At the same time, Hung Do said that fact-checking activities by news organizations have some limitations, such as the strict information and press control in the country. Due to this, fact-checking in Vietnam tends to focus more on societal issues, rather than on verifying government-related issues.

“This creates a huge difference in Vietnam’s landscape compared to other countries. For example, it is possible for (former) US President Donald Trump or (now President) Joe Biden to be a subject of fact-checking, but this is rare when it comes to Vietnamese leaders,” Hung explained. More independent ways of journalism could encourage more fact-checking projects and groups beyond media outlets, he said.

“The views of fact-checking articles are high as audiences are more and more concerned about disinformation,” said Khoi.

Zingnews editor Ngan Giang said that audiences today look not only for information, but their authenticity. Gone are what she called the “golden years” of social media in 2015-2016, when people did not have to deal with so much disinformation.

Hung Do added, “It can be hard to change audiences’ perspectives since they are likely to believe in what they want and view what they disagree with as ‘fake news’.”

Still, Khoi is upbeat about the future of his newspaper’s Real-Fake section. “Fact-checking activities in Vietnam are new and facilitate the role of ‘Tuoi Tre’ and other newspapers in providing accurate information to audiences,” he said.

(*Uyen Diep and a colleague started the 1856AA project fact-checking project in October 2020.)