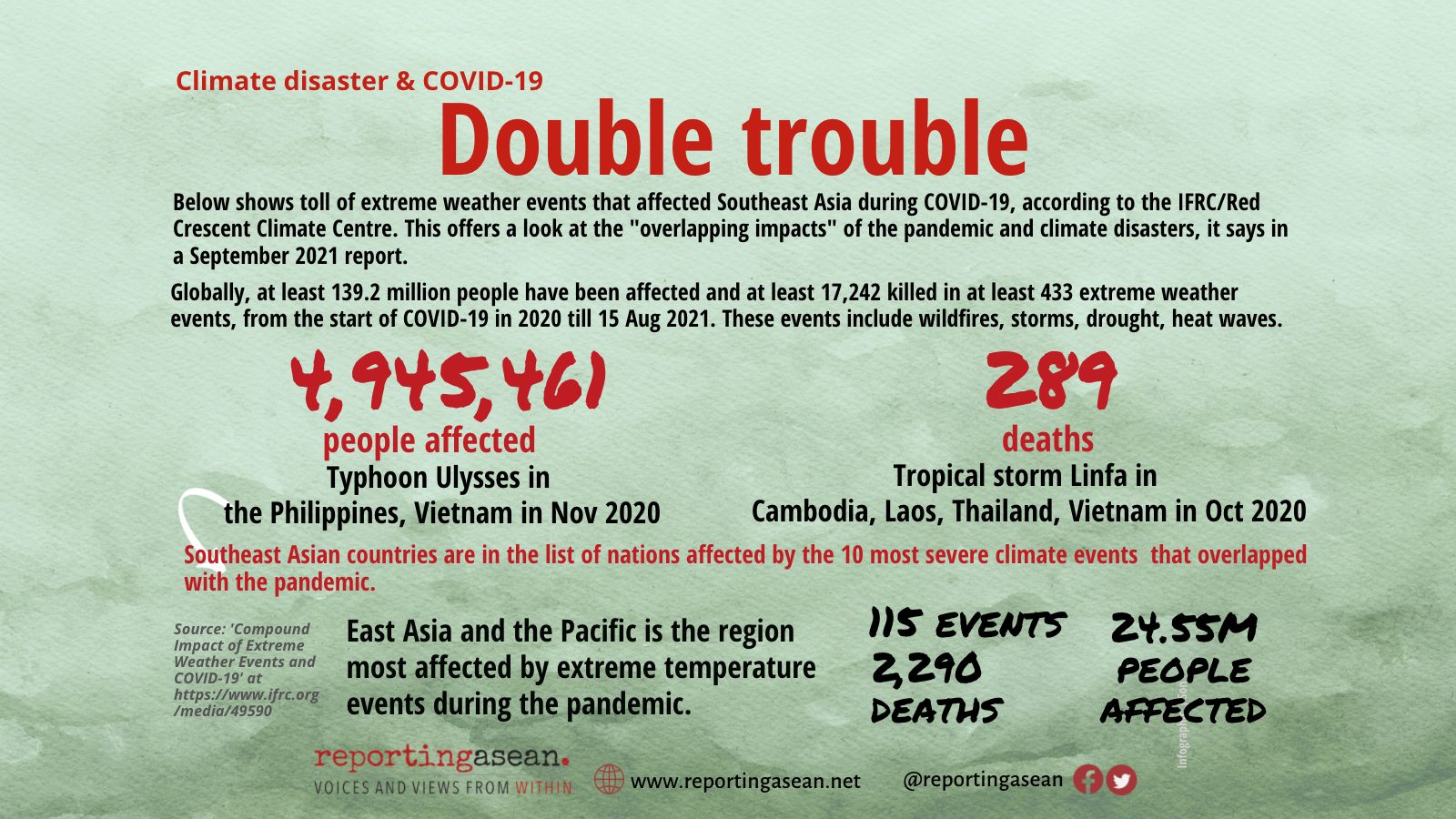 Carbon neutrality is a shared planetary destination, but Southeast Asian countries are laying out their own road maps – including what some may call detours of sorts – to getting there in the next three to four decades.

There is no single decarbonization path to that goal, they say. ASEAN countries’ descriptions of their policies, targets and wishlists by 2050 and beyond, are individual recipes that use many shared but not the exactly the same ingredients, and mixed in varying amounts and across timelines, to produce different versions of the same dish.

Consider the variety of ‘ingredients’ that energy ministers and officials listed at a September forum on Southeast Asia’s low-carbon energy transition, organised by the Jakarta-based Economic Institute for ASEAN and East Asia (ERIA).

The Philippines’ commitments include reaching a 50% share of renewable energy in the power generation mix by 2040 and a focus on geothermal energy, where 100% foreign investment is now allowed. In its “aspirational goals” is the ambitious target of cutting greenhouse gas emissions by 75% by 2030.

“Nuclear power plants will be developed. Hydro and geothermal plant will be developed massively,” Indonesia’s Energy Minister Arifin Tasrif said, adding that the country is looking to solar power as it stops making new fossil-fuel plants after 2030, and retires coal-fired and diesel power plants from 2031 to 2040.

Thailand puts focus on identifying and creating more carbon sinks, such as through reforestation. Tree planting, hydroelectric power and ecotourism were listed by Lao Energy Minister Daovong Phonekao in the country’s path to carbon neutrality. Laos’ success in raising forest cover from 49% in 2015 to 60% by 2025 means it “can absorb more CO2 that she produces and still has the excess capacity to help the atmosphere”, he said in June.

Talk of “energy security” needs is a common refrain among ASEAN countries, whose primary energy demand is seen by ERIA to grow by 2.2 times by 2050. Yet hey are feeling the impact of climate change more, even with lower per-capita carbon emissions.

“It (Myanmar) is currently not in a position to take an economy-wide approach in quantifying and reducing emissions. But we aspire to do so in the future,” said Myanmar’s Aung Than Oo, the military-appointed minister for electricity after the February coup.

Behind these mix-and-match options are the different realities within ASEAN. While Singapore, Thailand, Vietnam have 100% electricity access, Myanmar has 70%, Cambodia 89% and the Philippines, 93% as of 2020. To reduce its carbon emissions, Myanmar is still trying to get households to shift to liquid petroleum gas from firewood and electricity.

Renewable energy, such as natural gas and hydro, is being pushed as a lesser-evil and transition option. But this is far from a straightforward path too.

In a region where nearly 80% of the primary energy mix is from fossil fuel (oil, coal and natural gas), greenhouse gas emissions have yet to peak. Indonesia’s will peak in 2040, achieving net-zero emissions by 2060 instead of its previous 2070 target. Thailand and the Philippines see emissions peaking in 2030, with Thailand reaching net-zero in 2060 to 2065.

Until COVID-19, Indonesia was the world’s top coal producer (it’s now second to Australia). Vietnam and Cambodia have been making investments in solar power.

Varied too, are the renewable energy types that countries deem palatable as bridge fuels to cleaner ones — natural gas is renewable energy but is still a fossil energy source – and sustainability questions persist around big hydropower.

“One size does not fit all,” ERIA senior policy fellow Jun Arima said, even if ASEAN’s 10 countries are all bound by the Paris Agreement targets on greenhouse gases, three-fourths of which are carbon dioxide. “Pathways towards carbon neutrality could be diverse among countries,” he explained, though countries need to start moving now to reach carbon neutrality by the century’s second half.

“Each country’s specific national circumstances must be taken into account. Decarbonization pathway needs to ensure availability, accessibility and affordability,” Arima said, since “the high priority given to poverty eradication, or education or health care always needs substantial financial resources”.

Climate action in ASEAN countries is ranked fourth to sixth among the 17 Sustainable Development Goals, going by the ‘United Nations My World’ survey of citizens. Education was the top priority, followed by health care and poverty eradication.

This reflects the balancing act that countries, especially developing ones, are carrying out between the important and the urgent.

COVID-19 is adding to the vulnerabilities that Southeast Asia faces from climate change. Five of the region’s countries are in the list of those affected by the most severe climate-related events that overlap with the pandemic, says a September report by the International Federation of the Red Cross and Red Crescent Societies and its climate centre.

A total of 4.94 million people were affected when Typhoon Ulysses hit the Philippines and Vietnam in November 2020. In Cambodia, Laos, Thailand and Vietnam, 289 people died in the floods caused by tropical storm Linfa in October.

The Philippines and Myanmar top the list of countries in the region where children are most vulnerable to climate change. In the Children’s Climate Risk Index launched by the UN Children’s Fund in August, they share the highest risk score of 7.1.

Since 2020, more countries – mostly outside Southeast Asia – have been feeling the push to update their targets beyond the Paris Agreement ones – announcing stronger goals of a cap on global warming to 1.5 degrees Celsius (instead of “well below” 2C) and carbon neutrality by 2050 (instead of “in the second half of this century”).

But these targets are not on track to being met. Global warming will exceed 2C in the 21st century, the Intergovernmental Panel on Climate Change warned in August.

Given Southeast Asia’s realities, its decarbonization policies still include measures such as improving fuel efficiency, shifting industries to electrification, putting the brakes on coal and new fossil-fuel investments and stepping up reforestation or protecting peatlands, which are natural carbon sinks.

In contrast, industrialized countries are discussing more technology-based approaches to reusing and storing carbon in tanks or underground. In September, the world’s largest biggest carbon removal plant started operating in Iceland, its fans sucking in carbon dioxide from the air. Norway’s ongoing Project Longship will involve injecting carbon emissions from factories into storage under the North Sea.

What appears to be lower-hanging fruit for Southeast Asia – renewable energy – is also not straightforward due to its environmental and social footprint.

But the ASEAN Centre for Energy sees as progress the fact that electricity from renewable energy made up 33.5% of ASEAN’s power mix in 2020. This is just 1.5% behind the 35% target by 2025, reported Beni Suryadi, its manager of power and alternative energy.

About 82% of ASEAN’s new power capacity in 2020 was renewable – solar by Vietnam, hydro by Laos, he says. “More than 60% of newly installed capacity till 2025 will be from renewables,” Suryadi added.

Natural gas, which emits less carbon dioxide than oil when burnt, is being pushed as a transition electricity source and lesser evil than coal or oil, but climate advocates want it phased out too. Singapore announced a trial purchase of hydroelectric power from Laos in September – also to increase its renewables.

Southeast Asia is a key player in the wider Asia’s contributions to climate action. “Asia is, without question, the driving force of incremental CO2 emissions from now to 2050,” Arima said.

The challenges are huge. After reaching peak emissions in 2030, Thailand needs to cut these by 52% by 2060, says Thwarat Sutabutr, chief inspector general of the Thai energy ministry. The United Nations’ Emissions Gap 2020 report  describes Indonesia as a Group of 20 nation whose pandemic recovery measures have “high-carbon effects”.

Cutting back on greenhouse gas emissions or shifting from using means of production that produce these will not, on their own, be enough to quicken progress toward the under-2-Celsius goal. This is leading Southeast Asia to look at tapping carbon capture technologies used in industrialized countries – such as burying carbon, retrofitting fossil-fuel plants to using mixed or cleaner fuel, or using hydrogen or ammonia to produce power.

“We have to look at the widest options of technology, considering our national context,” Indonesia’s Tasrif said, noting that current approaches are “mostly country-driven, with limited consideration for regional cooperation”. Using ASEAN’s power grid and its network of gas pipelines in the future has come up in other discussions.

But the cost of capturing carbon is daunting: Nearly one billion dollars would have to be invested yearly from 2025 to 2030, says an IEA report .

Check out our infographics around sustainability here.

(*This analysis is part of Reporting ASEAN’s Sustainability Series, which is supported by the Heinrich Boell Foundation Southeast Asia.)