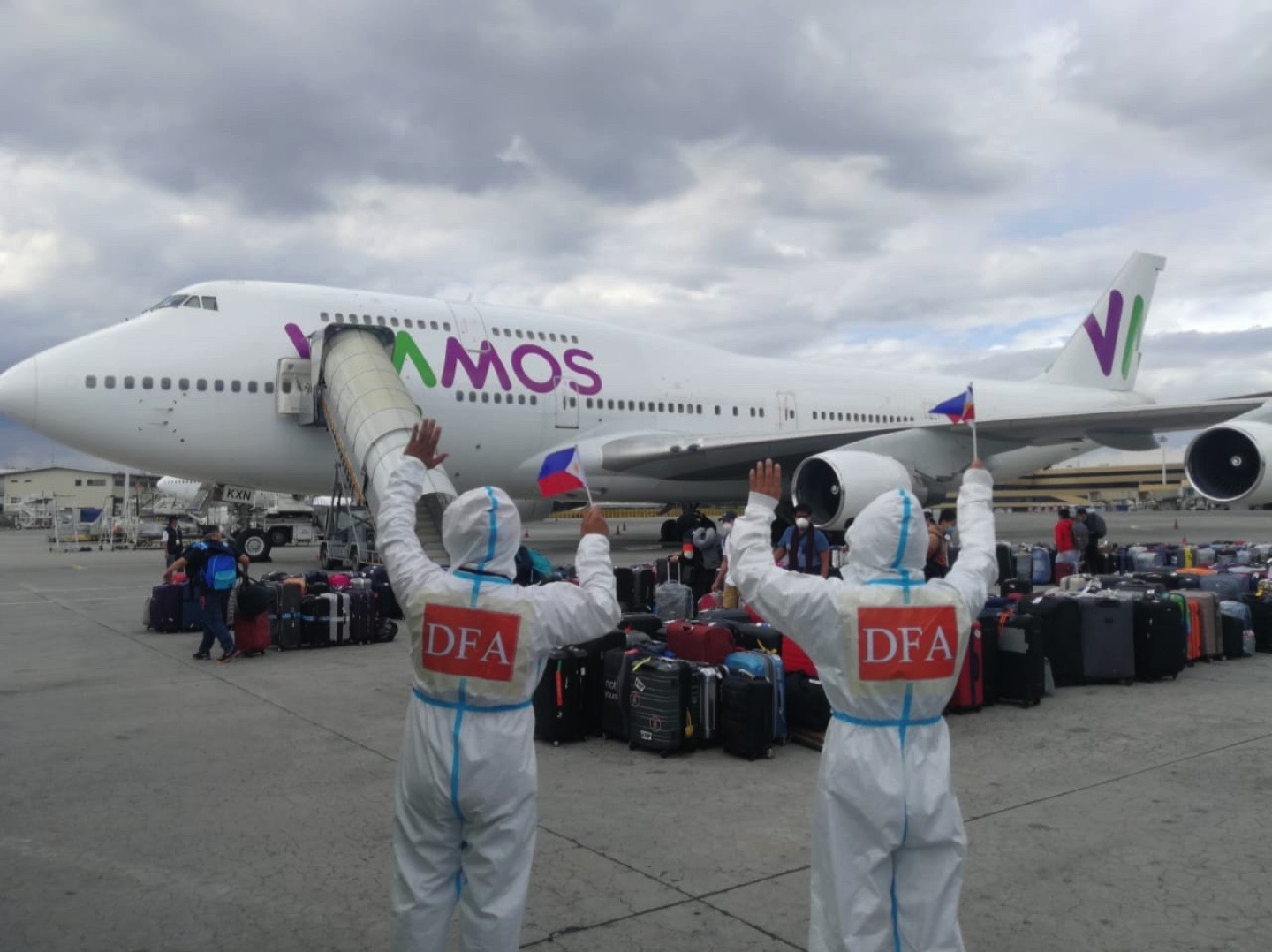 The Philippines’ five decades of experience in exporting labour – it has more than 10 million people overseas – have made it the ‘expert’ and reference point for other developing countries in managing migration. But what weak links in this has the COVID-19 pandemic exposed, whether in health insurance, paid leaves or other protection? What lies ahead? What do overseas Filipinos badly need at this point?

The Philippines has its hands full with the local pandemic, but the nation also has its nationals overseas to think of. As of 9 April, 609 overseas Filipinos have been reported sick with COVID-19, with 67 deaths., according to the country’s Department of Foreign Affairs.

Moreover, the country will have to deal with the growing number of Filipinos returning home, no least because of lost or uncertain jobs in a time of a global economic contraction. This is a massive, sudden reversal of sorts in a country more used to sending people out, rather than receiving them back in huge, continuing batches. This is happening in peacetime, quite unlike repatriation during conflict elsewhere, such as in the Middle East.

The first casualties are the crew of cruise ships, an industry that has all but sunk to the bottom. The Philippines supplies the largest number of the world’s seafarers, at about one-third of an estimated 1.6 million such workers.

The Facebook page of the Philippines’ foreign office says repatriations have been happening daily since 31 March. When we added the numbers of seafarers it reports as having arrived home – from Norway, the United States, United Kingdom, among others – the figure totalled 2,386 people in just two days from 8 April to mid-afternoon of 10 April. Other estimates, including from Filipino officials, say the returnees are expected to reach 10,000 to 26,000 in the coming weeks. What are they going to do at home, given the uncertainty of future contracts – and amid the risk of international travel?

It’s early days still, but will this pandemic become the game changer in the future shape, and standards, of overseas work? 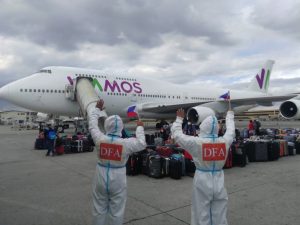 These, and more, are the topics discussed in a conversation that became a three-country chat among Thetis Mangahas, who used to be deputy chief for the International Labour Organization Asia-Pacific, Mahar Abrera Mangahas, a Hong Kong-based instructor, and Reporting ASEAN’s Editor/Founder Johanna Son*, who is based in Bangkok.

Reporting ASEAN: What are three top issues to think about in the COVID-19 pandemic, from the perspective of overseas Filipino workers? What does this tell us about how working overseas, and the systems for this, could change in the future?

Thetis: For post-COVID action? First, social protection coverage: It’s time to be more explicit in employment contracts on insurance and other safety nets for overseas Filipino workers in times of pandemic-level illnesses. This protection has to be both at the source and destination, certainly, should be covered under bilateral and multilateral agreements. Does the ASEAN Declaration, for example, carry such a provision? Also, perhaps more reflection on the extent of protection that recruitment and manning agencies can assume in conditions such as we are experiencing today.

Second, employment protection. There has to be some protection when it comes to job terminations due to calamities and pandemics, again something that could be pursued at bilateral and multilateral levels. And in the event of termination due to situations as a pandemic, workers should be assisted to return home. The recent report on terminated OFWs in Qatar highlight such problems.

Reporting ASEAN: Speaking as a Filipino living overseas, we need information that is actionable, helps us decide, not messages to the effect that the host country is in charge, period – which is what has also happened, especially earlier on in the pandemic.

Mahar: First, advisories. OFWs should be given information of how COVID-19 is being dealt with in our home country This can mean the difference between exiting an area that has COVID-19 (where an OFW may prefer to be less exposed) to entering a situation that might be worse (potential lockdowns, growing numbers of cases.)

Second, should we come back, what does self-quarantine look like? Is there financial relief for OFWs who are quarantined and cannot return to their jobs? The DOH advice needs to be given priority for greater dissemination; already we hearing cases were OFWs do not want to get tested, or worse, flee actual testing, because they feel that testing positive would entail work stoppage with resulting economic hardship.

Third, finally, in returning to work, how is our country providing help to those who wish to return to their places of work? What precautions do they need to take?

What is happening with OFWs in general is a lack of access to quality information, which in turn, makes the OFW community either ignorant, or worse, speculative when making decisions that can affect them and their families. As much as possible, these decisions should be done with more concrete information, and less guesswork.

Reporting ASEAN: In this crisis, people fall ill at their workplaces, which include home or medical settings. What access do Filipino workers’ have to medical treatment, or rest, depending on their employer or the countries/work arrangements they are in?

Thetis: Our standardized employment contracts for domestic work refer to only emergency medical care as a minimum though often, such care is provided via the employers. Country conditions matter obviously, with different systems in Europe (medical care given to all residents) compared to the Middle East (largely employer-provided) or Asia (mixed bag).

Mahar: It will depend on the state/territory that they are in. For example, the Hong Kong system practices universal healthcare that is highly ranked in the world. There are some employers that encourage (and sometimes pay) for their employees to use the public system if they were sick. This option might be out of reach for other OFWs (such as in the USA) where healthcare costs are prohibitive. Unfortunately, the respect for worker’s rights isn’t universal, and will depend on their employer’s character.

Should they get sick, OFWs will need to be briefed on what are their rights in such a situation; and preferably, the consulate or embassy should be ready to provide legal assistance to the worker whose life may depend on the upholding of those rights.

Reporting ASEAN: Do Filipino workers usually have health insurance, and what type? Do they have benefits like paid sick leaves so that they can take breaks or seek medical help – and not feel like they have to keep working anyway?

Thetis: Those working with larger companies often have the health insurance, paid sick leaves. Those in small firms and households very often have no access to such leaves. There is mandatory coverage by PhilHealth and the Social Security System here for those leaving on new contracts. How do these benefits kick in when the worker is abroad? Something to think about.

Mahar: No. Again, it will depend on whatever quality of life/benefits/assurances that is the baseline in a given territory.

Reporting ASEAN: What about undocumented Filipino migrant workers, who would have even more worries? Then there are regular migrant workers stuck in the Philippines now and can’t go back to their places of work.

Thetis: Irregular workers will be in the worst situations. Of course, there is no access to health care and will be likely the first ones terminated in a job slowdown. Regular workers stranded in the Philippines can claim some aid (such as the 10,000-peso grant of the Overseas Workers’ Welfare Administration). But of course, the irregulars would not be able to get that support. The regular workers might try accessing their social security and PhilHealth memberships for special assistance support.

Mahar: Yes, because care in the public system often requires some sort of identification which might reveal the veracity (or lack thereof) of their legal status.

As for the ones stuck in the Philippines, there were enough calls for action to return to work (again, as with Hong Kong) that resulted in a declaration form that said, if OFWs wanted to fly back to their jobs, that they would indemnify the Philippine government from responsibility for any consequences that resulted from their travels. In general, there is a worry whether or not we can get care even if we could afford it, because the growing concern now is that hospitals are filling up faster than cases are getting resolved.

Reporting ASEAN: There are going to be economic impacts all over, with the global supply chain and movement of goods, people affected. Would overseas Filipinos be seeing loss of jobs, impacts on remittances and the like?

Thetis: Remittances are counter-cyclical – the worse things are at home country, the levels of remittances increase. But then of course, this time the conditions are quite different. There is the real possibility of foreign jobs being lost.

Mahar: Any contraction in pay would result in a recalculation of what can be kept for maintenance in the host country, and what could be sent back home. The loss of jobs would depend on how badly hit the host country/company is hit by the current situation. The immediate effect would be hard, as both the OFW and their dependents would be cut off from income, unless the OFW can somehow manage to cushion this shock with savings.

Furthermore, if their jobs are terminated, there is a chance that their visas will be terminated too. In that situation, exploitation is known to happen, as OFWs would scramble to find work, accepting possibly dangerous or ill-advised positions/contracts, because they need to assure themselves and their families of that income. Others meanwhile, might negotiate for new terms (such as decreases in pay) to let them continue working, rather than get terminated.

That said, most see the remittance back home as an inflexible, non-negotiable amount, because those funds are spent on other inflexible needs (food, housing, schooling). Thus, what would happen is a scaling back of quality of living on the part of the OFW; my guess would be that initially, remittances would not dwindle, but personal spending will. What is more alarming is that this will definitely affect savings, which means that the OFW would be more vulnerable to future shocks should they happen.

What this may mean for people back home will depend on how OFWs transmit their living conditions and remittances to their dependents. Some OFWs are open about their conditions, and their families adjust; others feel shame, and pretend that everything is fine.