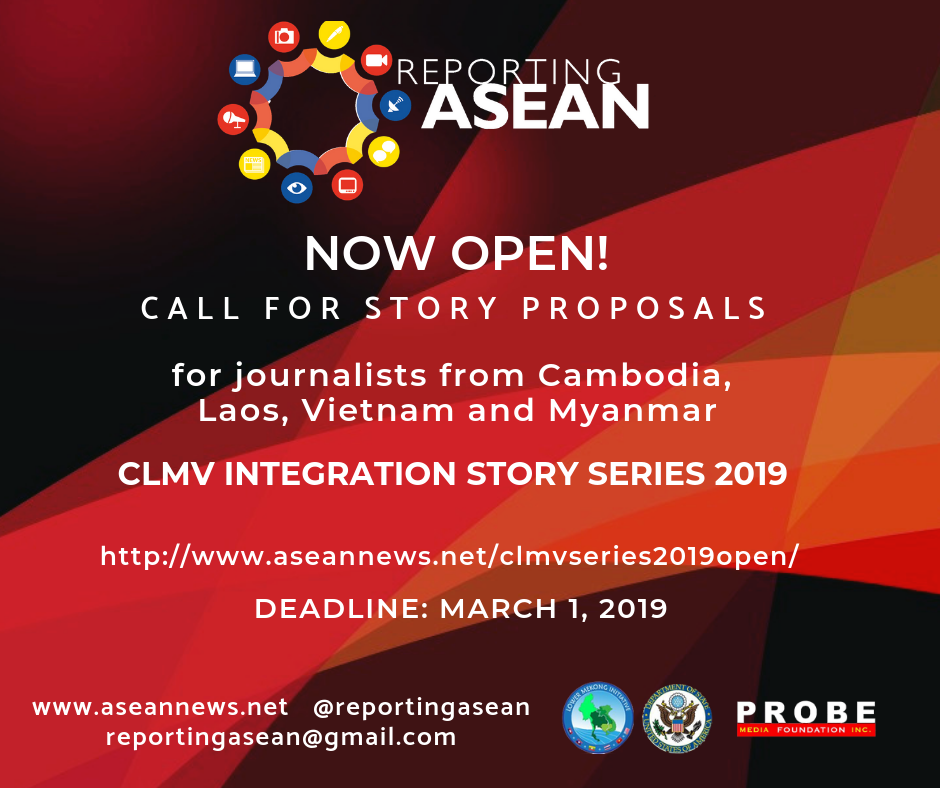 They are still called ASEAN’s newer entrants, but Cambodia, Lao PDR, Myanmar and Vietnam have been members of Southeast Asia’s main regional grouping for two decades or more now. They are part of the ASEAN Community which, currently on its fourth year, has set a vision for deepening integration till 2025, and is now looking at 2040 and beyond.

The integration process of CLMV, as the group is called, into ASEAN and the ASEAN Community, involves taking in ASEAN ways and habits, as regional linkages play a bigger role in national priorities. A good amount of these countries’ commitments under the Community blueprints came into full play in 2018.

All these mean that the ASEAN story is here to stay.

In an interconnected world where the lines between regional and domestic news have become blurred, these alert journalists to many cross-border issues around CLMV’s space in the ASEAN integration project. ASEAN stories are no longer foreign stories.

Open to journalists from Cambodia, Laos, Myanmar and Vietnam

But while media coverage mentions the ASEAN Community and ASEAN integration a lot, these tend to lump CLMV issues under those of the ASEAN-6 countries – the older, more developed ASEAN states. This tends to crowd out their unique perspectives, including the challenges they face with development gaps within ASEAN. At the same time, local media houses do not always have staff focusing on ASEAN issues, or have opportunities for in-house training on regional perspectives.

The Reporting ASEAN program aims to address these news challenges by providing a professional media space for CLMV journalists to focus on improving, and using, skills for analyzing ASEAN integration and community issues. For instance, how is the CLMV group adapting to becoming ASEAN? How has ASEAN membership and integration made a difference to them, whether in foreign policy, trade and economics, education, environment or disaster management? How can journalists capture the CLMV countries’ nuances and tell their stories in a solid, engaging manner that combines interviews, statistics and people’s voices?

The Reporting ASEAN program, hosted by Probe Media Foundation Inc, is an independent media venue for strengthening reporting skills and critical coverage of the role and impact of ASEAN and regional integration. The CLMV Integration Series, the program’s fourth round of fellowships since 2014, is supported by the Lower Mekong Initiative and the US State Department.

WHAT WE’RE LOOKING FOR 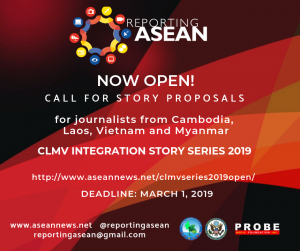 The Reporting ASEAN program is looking for quality story proposals from journalists who are curious about issues beyond their national borders and want to go beyond their regular news routines to do in-depth reporting with a regional perspective, into CLMV’s place in the larger ASEAN. Covering ASEAN issues does not mean only events at the high-level summits and ministerial meetings.

Applicants have creative room to propose stories from a wide range of themes related to ASEAN issues. This call for proposals would give priority to stories that focus on environment and sustainability (including marine waste, plastics, renewables and waste management), impact of economic integration, ASEAN identity, and challenges that are unique to CLMV.

The Integration Series is open to journalists with at least three years of experience, from the CLMV countries, who work in print, photojournalism, television/radio/audio and multimedia. It is open to both staff journalists and freelancers who can show regular work with their targeted news outlets.

Those accepted in the series would:

The following editorial outputs are to be produced by journalists accepted in the series:

Selected fellows would carry out this coverage project as part of their work with their media houses, because Reporting ASEAN aims to work in synergy with their newsrooms. Their stories would be published in their media outlets, whether local-language or English.

Reporting ASEAN accepts proposals in local languages. Translation will be provided during the workshop.

Reporting ASEAN encourages applicants to have the following elements in their proposals:

The application kit can be downloaded here , and application forms submitted online at http://bit.ly/clmvseries2019forms.

Applicants also need to email to reportingasean@gmail.com samples of work as follows:

For questions and information, write us at reportingasean@gmail.com.