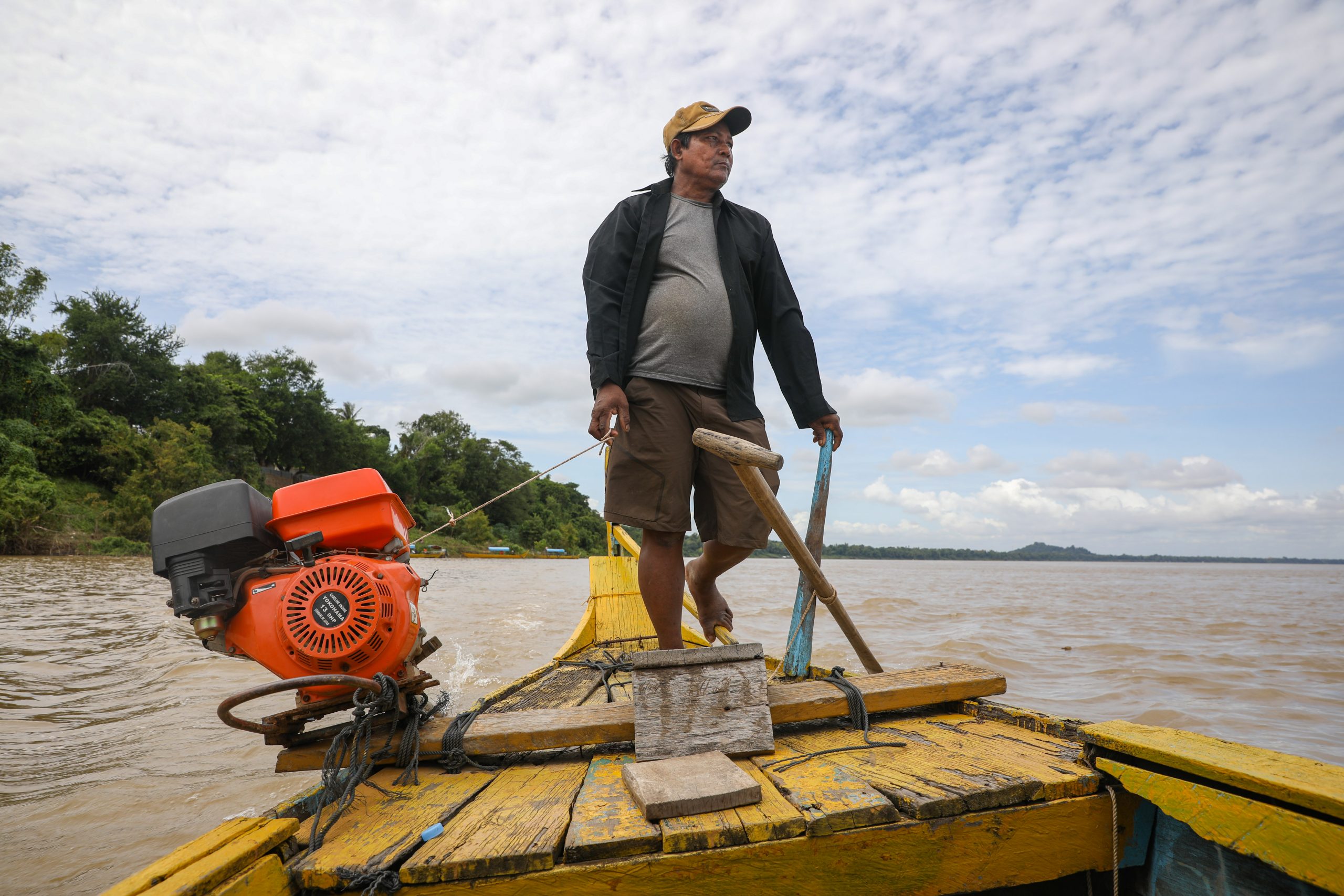 Heads swivelled as Sun Kerng redirected the rudder towards a patch of gurgling bubbles on the surface of the water. Boating through the Mekong River, visitors could spot the shine of an Irrawaddy dolphin beginning to appear.

“This now should be the only place where you can see Irrawaddy dolphins. It has become rarer and rarer,” said Kerng, a boatman at Anlong Kampi Dolphin Conservation in Cambodia’s Kratie province, where he has worked for more than two decades.

Kratie’s conservation area is a stronghold for the critically endangered dolphin population in the Mekong, a key reason Cambodia’s Ministry of Environment plans to submit the area as its first natural world heritage site.

The move comes in tandem with another proposal to the United Nations Educational, Scientific and Cultural Organization (UNESCO) for Cambodia’s first global geopark at Phnom Nam Lear Wildlife Sanctuary, Mondulkiri.

With a UNESCO-recognised biosphere reserve at Tonle Sap Lake, the duo of applications underscores the ministry’s growing interest in international recognition for Cambodia’s natural resources. While the process can take up to a decade, half a dozen natural sites are already under consideration for future submissions.

Researchers and conservationists debate whether global recognition could safeguard Cambodia’s landscapes from development and degradation – or if these internationally-approved management plans would only be enforced on paper.

The dual designations would coincide with a flurry of relevant anniversaries. It has been 50 years since the signing of the world heritage convention and 30 years since the inscription of Angkor Wat as Cambodia’s first cultural site.

Masanori Nagaoka, a UNESCO culture specialist in Cambodia, explains these protections are not just meant to safeguard natural landscapes, but also “contribute to climate change and the sustainable development goal agenda.”

“Angkor is really the icon of the country, but it is not it. We have very rich, beautiful natural settings, biosphere reserves and also endangered species to protect and promote,” Nagaoka said. “The selection of the sites depends on what the government pays attention to and considers.”

Status is the overarching benefit for these designations, Nagaoka added. And while funding does not automatically come with recognition as a world heritage site or geopark, the designations are “an effective tool to ensure the protection of the value.”

According to UNESCO, these additions would mean a significant step for Cambodia to protect its biodiversity and natural landscapes.

“The government has to make a pledge, not just to identify such a wonderful site to the world, but they have to promise to the world that they are committed to protecting such a value for future generations,” Nagaoka said.

Internationally, UNESCO has designated more than 250 natural world heritage sites and nearly 180 geoparks. Heritage status can be removed if management plans are not implemented by a given country.

As of 2021, Southeast Asia is home to 11 geoparks and 14 natural world heritage sites, with Indonesia leading in both categories.

Recognition by UNESCO pushes national, regional and local groups to work together and sets a higher standard for the environmental management of the area, according to Saut Sagala, a researcher at Indonesia’s Bandung Institute of Technology, who has studied geo-tourism.

While he believes the designation of these sites could effectively conserve landscapes across the region, Sagala cautions against a one-size-fits-all approach.

“There might be differences as well as distinct approaches or uniqueness in the values, regulations, and conditions of each place. Not only across countries, but within countries,” Sagala said. “Each place can set its own precedent and then these landscapes can learn from each other.”

The Ministry of Environment’s Department of Heritage Parks oversees the applications. Department officials declined to be quoted, explaining that internal policy only allows the ministry spokesman to be quoted publicly. However, they shared that Anlong Kampi’s submission was being prioritised.

By the end of 2023, the department hopes to be able to send the submission to Prime Minister Hun Sen for approval before officially applying to UNESCO.

World heritage inscriptions take several years and depend on the government’s initiative, according to Renate Heileman who works with the natural sciences unit for UNESCO in Cambodia.

“The government has been very proactive in pursuing the conservation of its natural sites through these different means,” Heileman said. “With world heritage, it brings additional support for regulatory and legal protection through the preparation of management plans and systems.”

Applications begin with a submission to UNESCO’s “Tentative List,” where sites can stay for five to seven years before beginning the nomination process. Landscapes are judged based on four criteria that emphasise threatened species, unique biological features and overall “outstanding universal value.” Recommendations are then made to the World Heritage Committee, which makes the final decision.

The annual committee meeting, where new additions to the list are approved, was planned in Russia for June 2022, but has been delayed indefinitely following the Russian invasion of Ukraine. This postponement has pushed back the inscription of Cambodia’s fourth cultural world heritage site, the Koh Ker Temple Complex in Preah Vihear province.

With Cambodia’s three cultural sites and a fourth on the way, reviewing a submission for Anlong Kampi as the country’s first natural world heritage site would be a priority, Nagaoka said.

Globally, the International Union for Conservation of Nature (IUCN) has classified the Irrawaddy dolphin as “endangered” on its Red List of Threatened Species. But the subpopulations surviving in Myanmar, Indonesia and Cambodia are considered “critically endangered.”

The primary habitat, referred to as “pools,” for Irrawaddy dolphins in the Mekong River spans a 180-kilometre stretch from Laos’ Khone Falls to Cambodia’s Kratie province.

In February, the last dolphin in a pool on the Cambodia-Laos border died, entangled in a fishing net.

“If we can work on this and UNESCO agrees to establish this area as a natural world heritage, I think it would be good for us because we actually can enforce the law,” said Rin Naroeun, protected area and law enforcement manager for World Wildlife Fund in Cambodia. He believes that world heritage site listing could benefit efforts in law enforcement.

Naroeun, who helped collect data for the world heritage site submission, said the February death of the dolphin only reinforces Anlong Kampi’s significance as a stronghold for Irrawaddy dolphins.

As of 2020, the Mekong dolphin population was estimated at a mere 89 individuals, according to a WWF report. But a new population survey is expected to be released in 2023, said Naroeun, who hopes the populations will show signs of growth.

“If we have UNESCO protection, we can push relevant stakeholders as well as the government officials to better protect the area,” Naroeun said. “If world heritage is one of the governments’ aims, especially the ministry of environment, I hope we will get it because we really need it.”

(*Reporting ASEAN published this article in agreement with Southeast Asia Globe, which produced the story in partnership with The Pulitzer Center’s Rainforest Investigations Network.)