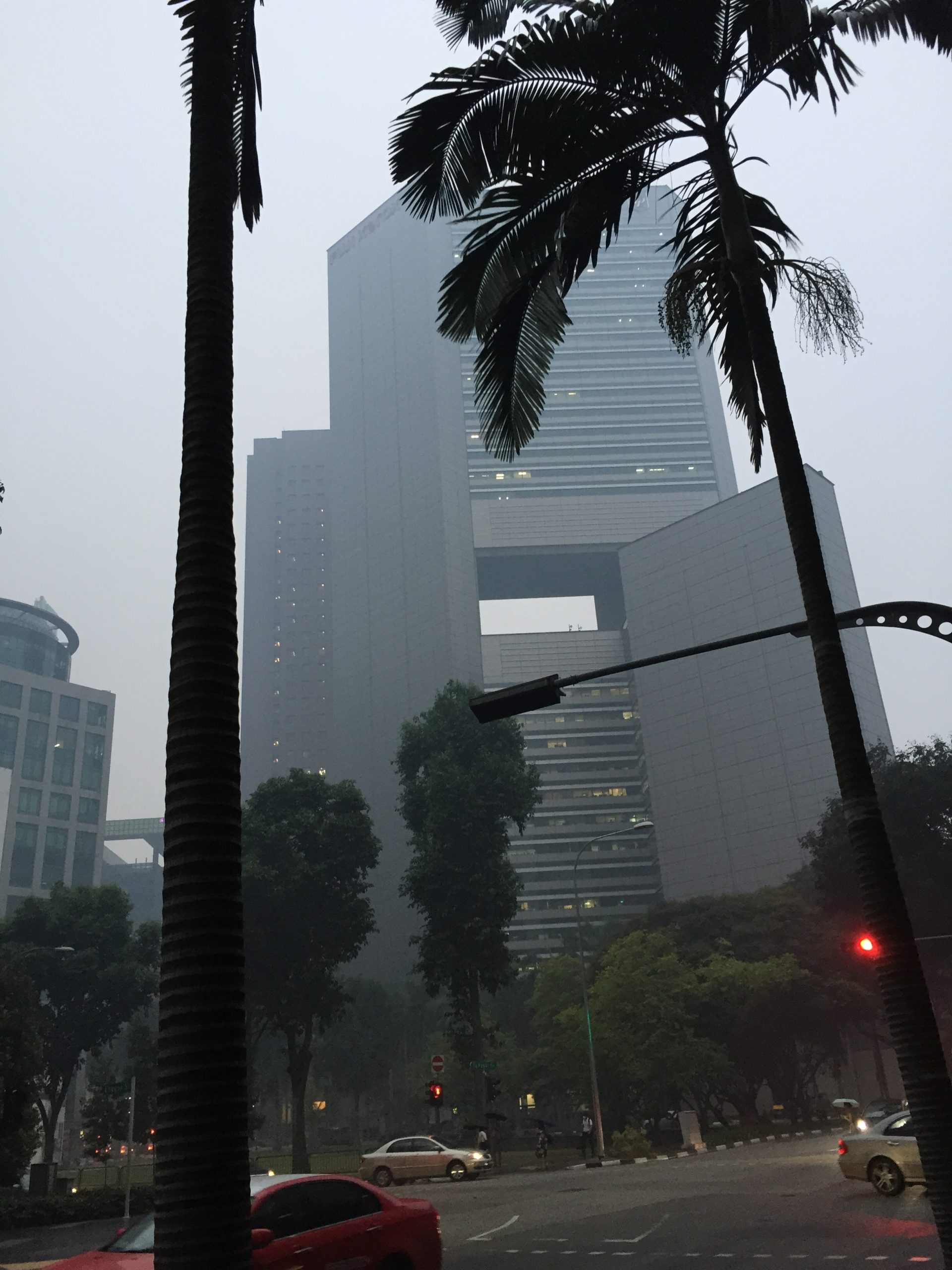 Home » Features » Business Tries to Cut Through the Haze

SINGAPORE, Nov 10 (Reporting ASEAN) – Toilet paper is not usually a subject discussed in polite company, but it has been a hot topic among Singaporeans recently. It has generated fierce debate about a seemingly unrelated matter – the pallid grey skies shrouding the shiny glass towers of this city-state’s financial district.

As this year’s haze episode affects Southeast Asian countries like Malaysia, Indonesia, Singapore, Brunei and Thailand – due to the burning, including by companies, of forest and agricultural land – an unexpected player has stepped in to show leadership.

Singapore’s largest supermarket chain NTUC Fairprice withdrew all products from Asia Pulp and Paper (APP), one of the companies under investigation by the city-state’s National Environment Agency for contributing to the transboundary haze that has left schools shut, outdoor activities postponed and flights cancelled in the country. Other chains swiftly followed suit or suspended further purchase of such products.

Supermarkets in Singapore get in on the act to combat the haze.        Photo: Aaron Low

Explaining the rationale behind the decision, NTUC’s Chief Executive Officer Seah Kian Peng said, “As an industry leader, we recognise the responsibility we have also to effect change.”

The pullout of products was motivated by the temporary suspension of APP’s Green Label certificate, which was issued by the Singapore Environment Council (SEC), a local non-profit organisation (NGO) focusing on sustainability issues. Since its launch in 1992, the organisation’s eco-labelling scheme has certified more than 2,800 products as being environmentally-friendly in 25 countries.

The Singapore Environment Council then worked together with another NGO, the Consumer Association of Singapore (CASE), to urge companies to declare that their raw materials are procured from ‘green sources’. Besides the 114 companies that have been included in the white list thus far, the Singapore Hotels Association pledged their commitment to obtain paper and pulp supplies from sustainable sources.

“We believe that the quest for sustainability is starting to transform the competitive landscape, which will force companies to change the way they think about products, technologies, processes, and business models,”  Edwin Seah, SEC’s executive director, said in an email interview.

Sustainability is the new buzzword among companies looking to appeal to consumers who are increasingly making environmentally and socially conscious choices. In fact, an October 2015 AC Nielsen survey found that 66 percent of consumers are willing to pay more for sustainable brands, up 11 percent from the year before.

The middle class in ASEAN countries is set to double to 400 million people in the next five years from 190 million in 2012, according to forecasts by AC Nielsen, so that the consumer appetite for green products is also set to grow.

“Companies that incorporate sustainability into their core strategy and operations are better placed to seize opportunities and address risks in a resource constrained world which is what we are in now,” Jeanne Stampe, WWF International’s Asia finance and commodities specialist, said in an email interview.

Yet incorporating environmental, social and governance (ESG) standards into companies has challenges.

As Edwin Seah reasoned, “There are some genuine concerns that companies in Singapore and ASEAN face and these relate to fears that the more environment-friendly they become, the more the effort will erode their competitiveness.”

Tensions exist between creating a socially responsible brand and maintaining the bottom line, while setting up a ‘green’ and transparent supply chain requires commitment and awareness from suppliers.

With the ASEAN Community to be formally launched on Dec. 31, the ability of companies to integrate sustainability into their operations across borders will be a litmus test for the association. Companies will “need to think a bit more about the impact of their business operations, not only in the domestic economy but in countries that are affected by it,” Dr Cassey Lee Hong Kim, senior fellow at the Regional Economic Studies Centre of the Institute of South East Asian Studies in Singapore, said in an interview.

These efforts by the private sector and consumers to use the market to encourage more responsible business practices are an interesting twist to addressing a recurring regional problem, one that raises neighbouring countries’ tensions with Indonesia.

All 10 ASEAN member countries have ratified the ASEAN Agreement on Transboundary Haze Pollution – it was signed in 2002 but Indonesia ratified it only in 2014. While it is legally binding, it has not been able to get countries or its companies in line in order to control the annual haze problem beyond extending assistance when needed.

There have been other ways of looking beyond reliance on government, by focusing on companies’ behaviour and public attitudes – although there is no common code to govern the actions of companies doing business overseas.

In 2014, Singapore instituted an act that allows the government to go after companies contributing to the haze. Malaysia is mulling over the implementation of a similar law. Indonesia, where deaths have been reported from the haze, is considering revising its environmental laws.

A May 2015 report by the WWF on sustainable finance found ASEAN financial institutions to be lagging behind their international counterparts in adopting ESG standards. With limited pressure from stakeholders and a less outspoken public, banks in Southeast Asia have largely not been compelled to integrate the significance of ESG issues into their lending practices.

In response to this year’s haze episode, the Association of Banks in Singapore released in October a set of guidelines for responsible financing that all banks will have to adopt. Many of the errant companies responsible for the toxic fumes blanketing the region are listed in Singapore.

“I think the strongest levers of influence in Asia remain the policy makers, institutions and businesses – a strong steer from ‘the top’ is extremely important,” Alexandra Tracy, president of Hong Kong-based Hoi Ping Ventures, which conducts research and consulting on investment and sustainability issues, said in reply to emailed questions.

Price tag on the environment

With less red tape to cut through and fewer feathers to ruffle in a region whose governments stick to non-interference, the private sector and grassroots organisations in Singapore have led the way with initiatives that tackle the haze from the public’s perspective. These include consumer boycotts, campaigns calling for cleaner air and civil suits against companies linked to the forest fires.

Haze Elimination Action Team (HEAT), an anti-haze movement led by Prof. Ang Peng Hwa from Nanyang Technological University, has seen its members grow fourfold to 3,200 in August and September, compared to 800 over the past eight years. “It’s got to a stage where people are really angry about this issue. And so that’s the major change and people are willing to take some action,” Ang said in an interview.

Nonetheless, practically and price still influence the average Singaporean, who is more aware of the environment these days yet pragmatic to the bone. Asked if she would consider purchasing sustainable alternatives over less environmentally-friendly products, Halimah, a homemaker, replied, “If I have a lot of other choices, yes. But if I require these products, then I guess no.” (END/Reporting ASEAN)