BANGKOK, May 4 (Reporting ASEAN) – China is stepping up its charm offensive in Southeast Asia, using water diplomacy to package itself as a regional power eager to help drought-hit Mekong countries and assist smaller ASEAN countries in narrowing the development gap within the region.

The meeting, co-hosted by Thailand, aimed to foster closer ties among the six countries that share the Mekong River. 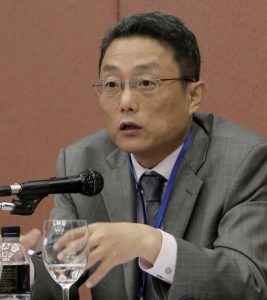 Yang Yi, secretary-general of the Chinese Institute of International Studies, at the public forum in Bangkok Photo: Mia Gomez

“We are willing to cooperate with all the downstream countries and resolve the water resource problem facing all of us. We already did so and will do so in the future,” Yang Yi, secretary-general of the Chinese Institute of International Studies, told the Apr. 28 discussion on ‘The Lancang-Mekong Cooperation: Challenges, Opportunities and Ways Forward’ here.

Originating in China’s Qinghai province near Tibet, Southeast Asia’s longest river covers an area of almost 800,000 square kilometres and flows through Indochina till it empties out into the South China Sea some 5,000 kilometres later. Sixty million people depend on the lower Mekong basin and delta for food, water, transport and other daily needs.

The Mekong region is suffering from its worst drought in decades. Vietnam, Cambodia and Thailand are seeing levels of the Mekong River at their lowest since records began nearly one hundred years ago, according to a report by the United Nations Country Team for Vietnam.

After an appeal from Vietnam, the furthest downstream country and home to the fertile Mekong Delta, China agreed to release water for “emergency use” from the Jinghong Hydropower Station in its south-western Yunnan province from Mar. 15 to Apr. 10, in an attempt to alleviate the drought.

“China and Mekong River countries on the Indochina Peninsula are friendly neighbours,” China’s foreign ministry spokesperson Lu Kang said. “People living along the Lancang-Mekong River are nourished by the same river. It goes without saying that friends should help each other when help is needed.”

But China has not always been seen as the friendliest neighbour to date.

Its overtures to Southeast Asian countries, including through the LMC, come against the backdrop of moves elsewhere in the region, such as in the South China Sea, that some neighbours find worrisome or even aggressive.

From the larger perspective,“we have an asymmetric weight. China is bigger, the other countries are smaller,” said Thitinan Pongsudhirak, director of Thailand’s Institute of Security and International Studies (ISIS), at the April forum on the LMC. 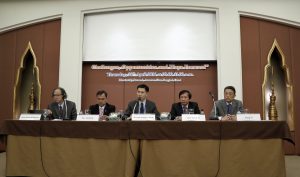 But then again, Thai analyst Kavi Chongkittavorn pointed out that there are differences between China’s posture in the Mekong Region and its behaviour in the South China Sea, where its actions building artificial islands and other structures to beef up its presence near the territory of countries like the Philippines has led to diplomatic tensions.

“China can do a lot in the Mekong region that can give them a sort of positive name, unlike in the South China Sea,” explained Kavi, a senior fellow at ISIS and a columnist for Bangkok-based ‘The Nation’ newspaper.

Other analysts are more conservative, pointing out how China’s dam construction along the Mekong’s upper reaches – with no genuine consultation with neighbouring countries or communities – has been far from an example of neighbourly behaviour.

Over the decades, it has built six dams, including the Jinghong one, on the Lancang, which is how China calls the upstream Mekong. These decisions did not have much involvement by the inter-governmental Mekong River Commission (MRC), where China is an observer because it groups downstream countries. Non-government groups like the US-based International Rivers Network say 14 more dams along the Mekong are planned.

China’s dominance does affect how smaller countries in Southeast Asia deal with it, some analysts argue.

By being in a position to control the flow of water down the Mekong – regardless of the lower volume of the river’s water that China says it accounts for – it has become an upstream superpower with considerable leverage over other riparian countries.

China, for its part, habitually cites that it accounts for less than a fifth of the volume of water in the entire Mekong. Yi added: “If we take the whole river, Lancang-Mekong, we account for less than 1 percent of the water consumption. It’s a very small amount of water for the (use of the) Chinese right now. “

But aware of China’s lever on the Mekong – one that is crucial in times of drought or floods – downstream countries are reluctant to criticise a China that they are increasingly reliant on, geostrategist Brahma Chellaney argued in a ‘Nikkei Asian Review’ analysis in March.

“Its latent capability to control cross-border river flows arms it with significant leverage over neighbours – a leverage it could employ to influence the behaviour of those states, including deterring them from challenging its broader regional interests,” Chellaney wrote.

FROM THE MEKONG TO ASEAN

Chinese statements about the LMC clearly link cooperation on Mekong issues with ASEAN, with focus on helping ASEAN’s newer members cope with the challenges of development and integration. This is significant because four ASEAN countries – the Philippines, Malaysia, Brunei and Vietnam – are claimants to parts of the Spratlys and islets in the South China Sea. 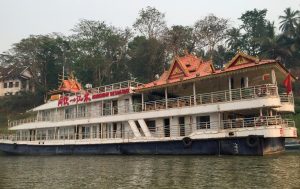 A Chinese vessel by the Mekong River in Luang Prabang, Laos, a common sight since navigation down the river became easier. ‘Nourished by the same river’, it says across the boat. Photo: Johanna Son

China has also been building deeper economic ties with ASEAN over the years. Trade between China and the Mekong countries reached nearly 200 billion US dollar in 2015. China is the largest trading partner of Cambodia, Thailand, Myanmar and Vietnam.

At the April discussion, China’s Yang Yi said: “I think it (LMC) will be become a new model of the South-South cooperation in the future.”

Although leaders at the first LMC meeting came up with a comprehensive 26-point action plan in the Sanya Declaration, stickling points still remain. Concerns about common access to hydrological engineering data, water security issues and the need to balance energy needs against environmental interests are chief areas of contention.

“Unless the Mekong governments can fully balance the economic benefit against dam construction… (it) will open up a new threat to regional security as impetus and competition to exploit the Mekong basin are still running high, putting severe stress on water resource security in the Mekong region,” warned Pou Southirak, executive director of the Cambodian Institute for Cooperation and Peace.

Voicing cautious optimism expressed by many at the forum, Ake Tangsupvattana, dean of Chulalongkorn University’s faculty of political science, said, “There have been water tensions between upstream and downstream countries, but I think there is enough spirit of goodwill to overcome problems and come up with solutions.”

Although China has yet to sign a transboundary water treaty with the Mekong countries, its active role in the LMC, compared to observer status in the MRC, signals a desire for closer cooperation with ASEAN, many agreed. It lays out the hope that the river’s resources can be managed more multilaterally in a stable and peaceful manner.

“For the time being, if they (China) can just release the water and do more, make sure that they keep up their commitment and do more for the ASEAN countries, the lower Mekong particularly, the better it is,” said Pou.