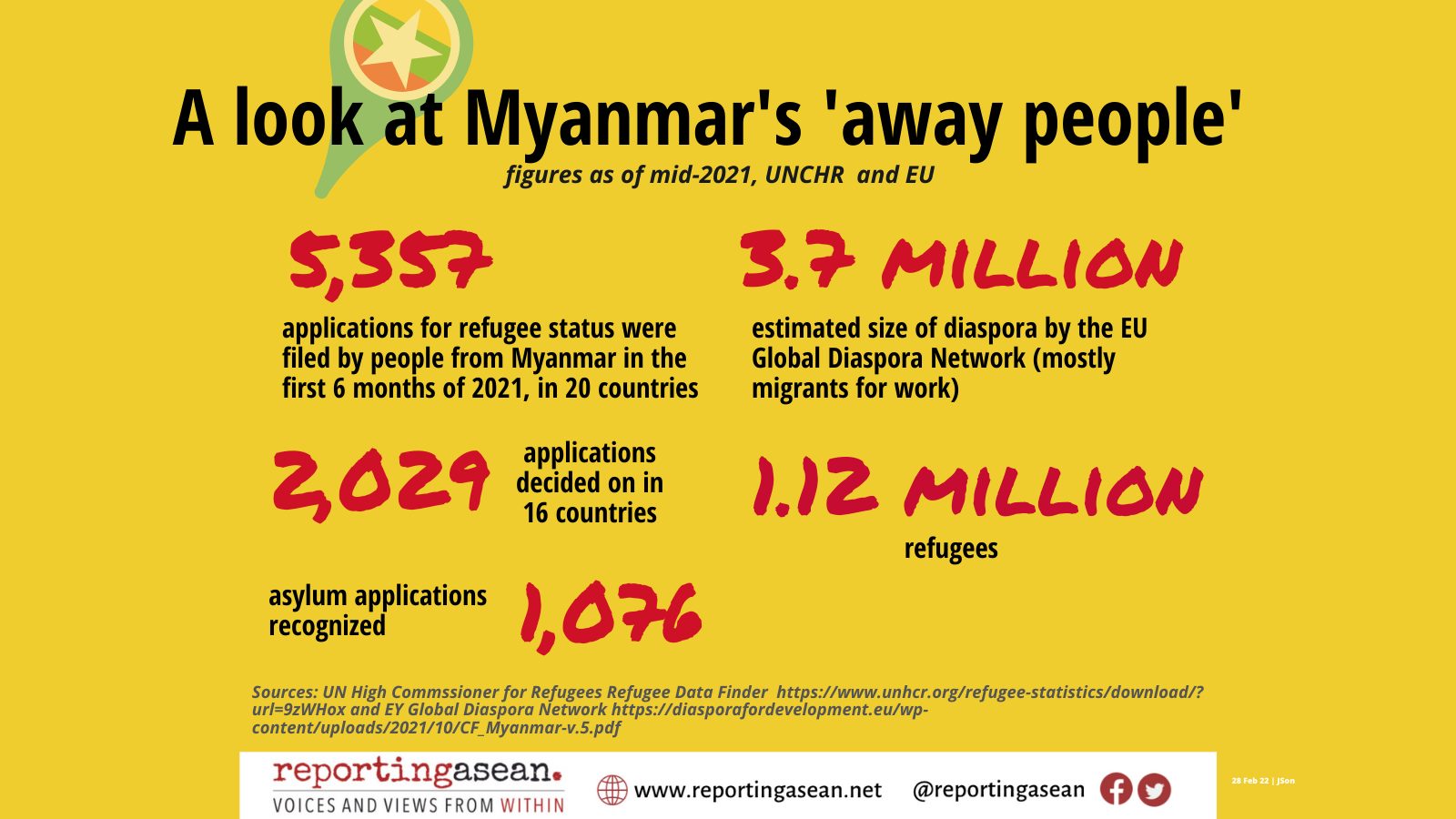 Home » Features » Away from Home, They Brought Myanmar With Them

An ousted Myanmar legislator, doing kitchen work in a restaurant in the United States, sends half of his salary to the forces battling the military that seized power in his country. A journalist reports about Myanmar from across the border in Thailand, making this her contribution to her country. From ‘home’ in a Southeast Asian country, a Myanmar national says nightly prayers for his country at a makeshift altar.

These are but a few of Myanmar’s people who are away from home, having taken different routes to other countries since the military takeover of 1 February 2021.

Some packed up after the military came for them. Many were at risk of being arrested, or saw relatives and friends arrested or harassed.

Others saw their futures crumbling before their eyes, in a country where people do not need to be high-profile to be killed or have their rights violated, where armed resistance continues against the military and insecurity is the norm. Up to 25 million people, or over 45% of Myanmar’s more than 55 million people, are projected to fall into poverty in 2022, the United Nations says.

“I’m (doing) positive thinking. My thinking is I’m (a) tourist,” said the former member of Parliament from the National League of Democracy party, who holds refugee status in the US. “It’s like I come here, see their culture, their system, their food” is how the 47-year-old politician, who asked to be called ‘Saturday Dragon’, copes with what he hopes is a temporary life. “We hope we can win within one year, and we’ll be back (in Myanmar).”

“No, I’m not okay,” said Win, a former migrant worker who has a small business in Myanmar. “My emotion everyday (is) not good, mood also not good,” he said, agitated. Glued to Myanmar updates on Facebook, he tries to find solace by daily for his compatriots, including the people’s defence forces (PDFs) that are fighting the military, apart from doing meditation and visiting a Buddhist temple.

Though people like him plan to return to Myanmar, they are, for now, additions to the millions who make up the country’s already large diaspora, one that has been fed by decades of crises through various military regimes and political turmoil.

The European Union Global Diaspora Facility puts the size of Myanmar’s overseas communities at 3.7 million (6.8% of the population), but this figure covers mainly work migrants.

Then, there are the refugees from Myanmar that totalled1.12 million as of mid-2021, says the UN High Commissioner for Refugees. In the first half of 2021, it reported 5,357 asylum applications from Myanmar nationals, mostly in Malaysia, India and the US. UNCHR estimates refugee movements to Thailand and India since the coup at 46,000 as of mid-February, but actual figures are assumed to be higher.

Those who left after the 2021 coup are physically safe. But whether as refugees and asylum seekers, exiles or people waiting it out, their psyches remain intertwined with what is happening in Myanmar, all the time.

“What should I do (from here)? What we should do? Always we are thinking about this way, that way,” said Win.

“Everyone is going through the day with the hope that one day, they will be able to go back home,” said Sai, a female editor who has been living in Thailand for nearly a year and has no wish to live as a refugee in faraway countries. “If I go back home as my wish, I will not be safe and (can be) killed at any time. So for now, not returning home is a practical guarantee of safety.”

Some of these ‘away people’ left in the first few months after the coup, others more recently as it became clear that the Myanmar crisis would not end quickly. Some have gotten refugee status or residency in the US, Australia and in Europe. Many used whatever exit channels came up, including traveling to find work, pursue studies, or join relatives overseas.

They are not ready to think they will be away permanently, taking hope from the anti-junta resistance and the shadow National Unity Government, and hanging on to oft-shared projections of victory in 2022. Often, they take whatever work they can, while waiting for residency papers.

“I feel I’m a little bit downgraded compared to my level of life in my home country,” said Aung (not his real name), a Yangon-based writer and political commentator for whom soldiers came at 4:30 am of 1 February 2021. He escaped to a friend’s house and later headed for the border province of Myawaddy, crossed over to Mae Sot in Thailand and soon got his family over, then applied for asylum in the US.

The 53-year-old now works as a hotel receptionist in the US west coast, back in an industry he had worked in after finishing university. “My (hotel) job is not bad, it has good pay, so I can support the family, so I don’t mind,” Aung said. “Here we have no more concerns about our security, so this is a great relief.”

The book that he says he began writing on the day of the coup lives in his computer’s hard disk. “Everyday I’m writing more or less in my laptop, and I save it for future use,” Aung said.

His inability to present documents on his educational background limited his job options, Saturday Dragon says.Myanmar friends gave him a few hundred dollars when he arrived, and he got insurance and food stamps as part of US state support. But he says he wanted to work as soon as he could and took up a job at a Japanese restaurant.

He recalls struggling during the first three weeks, chopping vegetables, preparing meat in shifts that ended at midnight. “I don’t know how to use the machines, this is not my profession,” the NLD legislator said, now appreciative of appliances like dishwashers that lighten his tasks.

At one point, he was doing nightly Zoom meetings with fellow dissident parliamentarians after work. He says he gives half his monthly pay, or 1,000 dollars, to the Committee Representing Pyidaungsu Hluttaw  (CRPH) that groups legislators who are against military rule. “We collect money, send money to support the local defence forces,” he said, “not huge amounts but every small town in the US and Australia, and all over the world, all of the Myanmar people” are raising funds to support the militia at home.

Win says his anxiety about home, unfamiliar food and language where he is today is nothing compared to what people in Myanmar are going through. “I can still eat, still sleep – the PDFs, many children are being killed, they don’t have food also,” he said. “So always, if I have something like these (worries), it is only a few (inconveniences) for me.”

Conversations With Myanmar’s Away People

Sai, the journalist, faces risks without proper documents to stay in Thailand. “We are suffering the loss of mental safety as another one of the biggest challenges facing the current situation in the background (in Myanmar) when struggling in living without arrest (in Thailand),” she said.

The longer the military stays, the longer they see themselves staying away. For now, they deal with the everydayness of their lives on hold.

“When I face stress, I talk to my family on the phone and video calls. I talk to my mother every night. Let it feel close but far,” Sai explained. From far away, she uses online apps to order food for her family in Myanmar.

Her biggest fear is that “it will be too late to go home,” Sai said. “If the revolution will be long or fail, we would not have a chance to go back. That’s why it’s important to reach the goal for democracy.”

Aung worries that Myanmar’s army will rig the 2023 election it has talked about and “declare themselves as elected president and rule the country forever, just like in Russia and Cambodia.”

“We must win, we should,” said Win. The journalist in her speaking, Sai says that while the Myanmar revolution will succeed, “for now, I think it will take time.”

(*Johanna Son is editor/founder of the Reporting ASEAN series.)