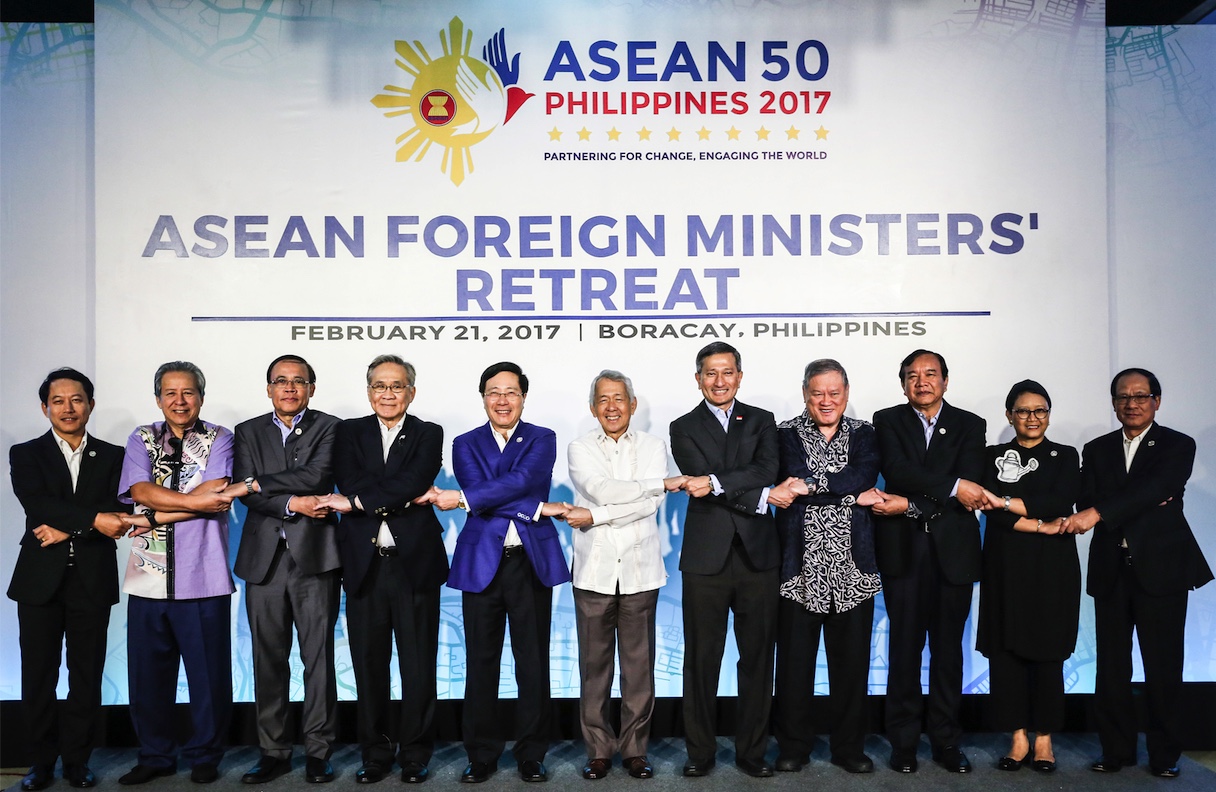 MANILA, Feb 25 (Reporting ASEAN) – This week’s smooth, relatively uneventful retreat by ASEAN’s foreign ministers appears to have put the grouping’s agenda on track for its 50th year, choosing to focus beyond the South China Sea disputes and set the stage for an April leaders’ summit that will put the spotlight purposefully on ASEAN’s golden anniversary.

In contrast to recent years where the South China Sea tensions, including the construction of structures by China and the barring of access to other Southeast Asian claimant countries’ fishers were discussed in ministerial-level discussions, this year’s first retreat among ASEAN foreign ministers marked a step back from this long-simmering issue to a friendlier, wider exchange on all other matters relevant to marking ASEAN’s 50th year. 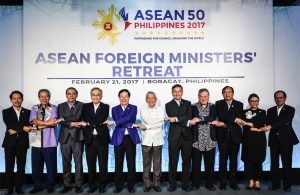 The lone official photo from the Boracay retreat from ASEAN, amid limitations on media coverage.

“The (Feb 21) retreat went well because they had a frank but friendly exchange on the issues such as the need for ASEAN unity, assert ASEAN centrality, the need to move ahead with the Code of Conduct for the South China Sea, particularly a framework and the need for ASEAN to be more people-centred,” a senior ASEAN official said.

Since 2002, the 10-country ASEAN has had a declaration on a code of conduct aimed at easing tensions among claimant countries in the South China Sea, whch include four ASEAN member states. In recent years, China’s behaviour – the seizure of some reefs occupied by ASEAN-member claimant states and more recent years its building of artificial structures and land reclamation – has increased worries in the region.

While China supports the declaration, attempts by ASEAN to give more political and legal weight to what is essentially just an agreed statement of principles and to eventually make it a legal mechanism, have not produced much in the last 15 years. As ASEAN chair this year, the Philippines has said it would like to deliver, by July, at least a framework that defines that a would-be legal code could include.

While the South China Sea was mentioned in the post-retreat statement, there was no dwelling on it and it was discussed in the same length as all other matters, the same diplomat said of the talks held at Boracay island, one of the Philippines’ top tourist attractions located in central Aklan province, more than 300 kilometres south of the capital Manila.

This time, “it was South China Sea plus”, the diplomat explained. Maritime security and cooperation initiatives particularly on marine environmental protection, as shepherded by the Philippines, were also discussed at the retreat. “The discussions went smoothly. Some raised concerns on the South China Sea developments. But there were no issues which led to heated debate,” the official said.

The source, who requested not to named because of the meeting’s confidential nature, added that at the retreat, the other ASEAN countries expressed support for the Philippines’ priorities in its chairmanship of ASEAN. These six priorities are: “a people-oriented and people-centred ASEAN, peace and stability in the region, maritime security and cooperation, inclusive and innovation-led growth, a resilient ASEAN and ASEAN as a model of regionalism, a global player.”

In the ASEAN Foreign Ministers’ Retreat in early 2016 in the Lao People’s Democratic Republic, five out of 16 paragraphs in the chairman’s press statement after the meeting were on the South China Sea. The document mentioned ministers’ serious concerns over land reclamation activities, the need to “avoid actions that may further complicate the situation” and reaffirmed the importance of freedom of navigation and overflight.

In contrast, only one – the last – paragraph in the short chairman’s press statement of eight paragraphs issued in Boracay was about the South China Sea. While it mentioned ministers’ “concern over recent developments and escalation of activities in the area which may further raise tensions and erode trust and confidence in the region,” the statement at the same time “noted the need to sustain the momentum of dialogue in order to ease tensions in the region”.

In a document that signalled that ASEAN wanted to focus on more than the South China Sea row and China’s behaviour, the foreign ministers made it a point to highlight their commemmoration of five decades of cooperation and community-building in ASEAN.

The ASEAN ministers “emphasised the importance of continuing to promote initiatives that directly benefit the people of ASEAN, including the need to redouble efforts to increase intra-regional trade and further strengthen mechanisms for extending consular assistance to ASEAN nationals consistent with ASEAN’s goal for deeper regional integration, and the usefulness of tapping ASEAN think tanks to assist in charting the future direction of ASEAN,” according to the statement by the Philippines after the retreat.

The ASEAN foreign ministers’ retreat, though not a formal ministerial meeting, is important because it precedes a formal ASEAN leaders’ meeting and is usually the most senior venue for ironing out the issues to be pronounced at the leaders’ summits – in this case, the April 26-29 one. An informal meeting with no fixed agenda, this mechanism allows the incumbent ASEAN chair to facilitate free-wheeling discussions around key issues member states want to bring up.

In Boracay, the ministers exchanged views on the new leadership in the United States. ASEAN remains unclear about US President Donald Trump’s policy toward the region.

“We do not know the complete picture of what his foreign policy will be in so far as its relationship with China is concerned or China’s relationship with United States is concerned, America’s relationship with the rest of ASEAN members. We are, however, hopeful that the policy that would come out will be positive for everyone and will contribute towards peace stability and progress in the region,” Philippine Foreign Secretary Perfecto Yasay Jr said in Boracay earlier in the week. “But we would like to make sure that we are able to engage America, and even China, in making sure that this policy will be clarified, will be completed,” he said.

The Trump administration’s arrival is the biggest uncertainty ASEAN faces at the moment, says Kavi Chongkittavorn, a senior fellow at the Institute of Security and International Studies at Chulalongkorn University in Thailand. He predicted that ASEAN will adopt a wait-and-see posture for now.

This includes watching to see whether Trump will attend the ASEAN summit to be held in a former military US base in the Philippines in April, and the annual US-ASEAN summit, held yearly since 2013 under the Obama administration under its engagement policy with Asia.

“Whether Trump will come to the Clark (air base) summit or not (is) is important for two reasons – the Philippines is (ASEAN) chair and is one of its (US’) loyal allies,’ he told a media forum organised by the Reporting ASEAN programme in Bangkok in mid-February. “If Trump does not come – he has a very good excuse not to come – it’s a big slap on the face of the Philippines. The second slap is on ASEAN, because ASEAN and the United States will hold the fifth US-ASEAN summit (this year). . . and I don’t think he’s coming,” Kavi said.

The Philippines is unsure of Trump’s attendance at the East Asia Summit as well. This annual meeting of the leaders of 18 countries, including the United States, China and Russia, is held after the ASEAN leaders’ summit.