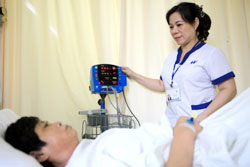 Home » Features » ASEAN will Open Up to Viet Nam Skills 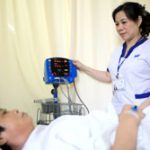 A nurse caring for her patient at the Ha Noi-France Hospital. Nurses are among members of seven professions who will be able to move and work freely among ASEAN nations by 2015, but few of them know about it. — VNS Photo Viet Thanh

Working abroad is a dream that nurse Nguyen Hoang Lan has nurtured for years. “I have thought about it since I was single, although I couldn’t figure out why,” says Lan, who is now mother to a five-year-old girl and is expecting another child.

“But for now, I know I want to make it for my children. They must study abroad for a better future,” the 27-year-old mother says determinedly. “And I will try when it becomes possible,” she says.

Lan has been working for six years at one of the most popular international hospitals in the city, the Ha Noi-France Hospital. She has ample English for communication, and she is confident her skills are sufficient to practice in a foreign country. This means she can pack up and cross the border to a new world at any time.

Lan’s job-seeking will become even easier now that Viet Nam and nine other ASEAN member nations are making plans to join a single labour market, plans that were first announced in 2007.

This follows a decision by ASEAN leaders to build an ASEAN Economic Community (AEC) by 2015. In other words, there will be one heart, one ASEAN. It will closely resemble the European Union and is expected to open up a free flow of investment, capital and skilled labour to provide deeper regional economic integration.

Under the AEC plan, skilled workers and members of seven professions – doctors, dentists, nurses, engineers, architects, accountants and surveyors – will be able to move freely within the region. “It is great news,” Lan says, her eyes radiating with joy. “It’s a chance for many Vietnamese people to thrive.”

Labour experts and national officials agree that the gains will be far greater than the losses, especially for Viet Nam. Carmela Torres, from the Bangkok-based International Labour Organisation, says that as Viet Nam’s wages are neither the highest nor the lowest in ASEAN, there will be a movement of workers both into and out of the country.

He also envisages advantages from the inflow. “The arrival of foreign workers will provide many more opportunities in trade, investment and employment, new knowledge and advanced technology,” he says. “This will help raise the quality of domestic labour.”

Torres says that the free movement of skilled labour will have a great impact on the regional labour market, making it more integrated and more qualified.

Engineer Nguyen Khanh Duy also forecasts a bright future for the information technology job market. “It will create advantageous pressure since it requires the whole sector, including training institutions, enterprises and workers, to gear up to stay competitive,” he says. Duy has ventured into designing software for mobile games that can be played anywhere in the world.

“The competition from the outside will create an impetus for development rather than worries over the loss of jobs,” the 26-year-old says confidently.

However, obstacles are also anticipated. All parties acknowledge that Viet Nam is grappling with a bundle of challenges. These include a shortage of highly-skilled labourers and the extreme shortage of Vietnamese speaking foreign languages.

According to an International Labour Organisation report on Labour and Social Trends in ASEAN 2010, there is a great variation in the levels of labour productivity within the region. The report indicates that output per worker in 2009 in Viet Nam was about 7 and 20 per cent of that in Singapore and Malaysia respectively.

“It’s clear that without good preparation, domestic labourers will face problems given their low productivity,” admits Trung from the labour ministry. However, of all the concerns, language barrier is recognised as the biggest.

Head of the nursing division of the Ministry of Health, Tran Quang Huy, says that although Viet Nam is behind some of its neighbours in recognising nursing, skills, the work done by home nurses was at a similar level to the best in the region. “Only their poor English skills is a disadvantage,” he says.

“Without a foreign language, or English, they find it difficult to access new knowledge, which is a barrier to integration,” he says, adding that this problem is facing the whole nation.

Duy also believes that most home IT engineers are well-trained, but few are ready to make a change, largely due to their limited knowledge of a foreign language. He estimates that about 10 out of 500 his fellow graduates from the high-ranking Ha Noi University of Science and Technology are qualified to work abroad.

A survey that ‘Viet Nam News’ did with a small group of nurses from the Ha Noi-France Hospital suggests that 90 per cent of them need to improve both English and professional skills to join the regional common market.

All the surveyed IT engineers are in a similar position. As ILO specialist Torres says: “There are opportunities for workers, but much of which will depend on their language skills.”

According to the Government officials spoken to, Viet Nam’s preparation for the single ASEAN labour market has so been mainly in handling the legal framework. Trung from the labour ministry says that a series of laws and strategies have been created to bring the country fully into the region and the world.

The revised Labour Code, which comes into force next May, includes amendments targeted at foreign workers. In the pipeline are laws on employment, work safety, minimum wages and revised social insurance laws.

Additionally, Viet Nam has ratified, or plans to ratify, several international conventions on employment, job services, wages and vocational training. Apart from newly-endorsed strategies on human resources, education and training, Trung says that the labour ministry is rushing to submit to the Government another one, part of it is on joining a single ASEAN labour market.

He says that existing laws governing the inflow or outflow of workers will be applied after 2015 unless new agreements are made within the bloc. Trung believes that Viet Nam is shaping a healthy and transparent labour market to lure the best domestic and foreign talent.

Huy from the health ministry says the preparations are laying the foundation for the future. Although praised as a huge step in creating professionalism in the working environment, a code of ethics for nurses only came into effect in September 2012, a decade after neighbours such as the Philippines.

According to Huy, Viet Nam ratified a Mutual Recognition Agreement (MRA) on nursing with other ASEAN members in 2006. With MRAs, each country can recognise education, experience, licences and certificates granted in another country.

Six years on, not much has been done to make the agreement function for Vietnamese nurses. Most have never heard of it. The survey found that most nurses and midwives at the Ha Noi-French Hospital and most IT professionals have no idea that there is a free labour mobility programme.

“The information should have been made available when we were at school,” Duy says. Trung and Huy acknowledge that there should be a push to make the information widely known among the public, particularly workers.

Many, like nurse Lan, have started to envision the future. “I long for the day that I can hit the road. Will it come true?” queries Lan. — VNS

*This story and photos were produced under the Reporting Development in ASEAN series of IPS Asia-Pacific, a programme supported by the International Development Research Centre.