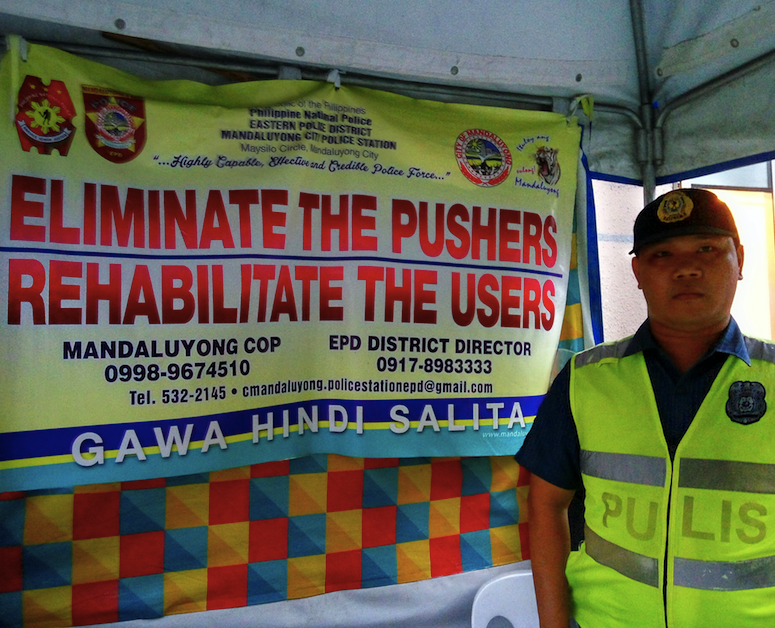 MANILA, Oct 3 (Reporting ASEAN) — As the international backlash continues over Philippine President Rodrigo Duterte’s bloody war on drugs, the lack of due process and the consequent deaths of ‘suspects’ in his campaign, ASEAN, along with its individual member states, has been characteristically silent.

For instance, ASEAN’s leaders and ministers met at the ASEAN summit in the Lao capital Vientiane in September and discussed a range of issues in the region and beyond. But neither the organization nor its members raised a whimper about rights concerns on the extrajudicial killings of supposed drug users and pushers since Duterte assumed office on June 30.

News reports put the figure of alleged users and pushers killed at 3,000 since Duterte assumed office on Jun. 30. 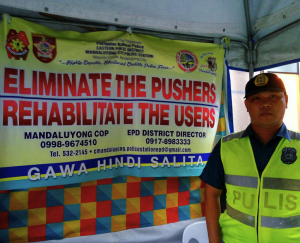 This banner at a police outpost in Mandaluyong City is a common sight in the Philippine government’s campaign against illegal drugs. Photo: T Bacalla

ASEAN’s silence on this issue was not particularly a surprise, but it was the latest example of how it is not the organization’s habit to tell off a member state about its domestic issues.

More typically, it was an outside state like the United States, though not a disinterested country, that brought up the issue of human rights at the Sep. 6-8 summit, where Duterte made his debut on the regional stage.

To human rights advocates across the region, the 28th and 29th ASEAN Summits, held back to back this year, should have been an apt occasion to discuss a subject that is otherwise anathema to the Southeast Asian organization, especially given its theme, ’ASEAN 2025: Forging Ahead Together’, which defines the vision of the ASEAN Community for the next decade.

At the ASEAN-US summit in Vientiane, President Barack Obama called to mind a “common vision” for the region — “(a)n open, dynamic and economically competitive Asia-Pacific that respects human rights and upholds the law-based order.”

But this is far from how the situation is from the view of the sectors that have been at the receiving end of certain ASEAN governments’ systemic suppression of dissent at home. This also comes at a time when the ASEAN Community has been formed with its three pillars — political security, socio-cultural, and economic – and where its peoples can enjoy “human rights and fundamental freedoms”.

ASEAN continues to steer clear of human rights issues in line with the principle of non-interference in its member states’ internal affairs. But as ASEAN turns 50 next year, critics say this adherence to non-intervention should not be absolute, especially now that economic integration is going full throttle after the launch of the ASEAN Community’s in December 2015.

The organization has shown much more openness – and willingness to let go of sovereignty concerns – in the areas of economics and business rather than in political areas such as human rights.

“ASEAN has promoted a harmful contradiction. Member states have abandoned ASEAN principles of ‘non-interference’ and ‘state sovereignty’ in relation to capital and economic policy but doggedly retained them in relation to human rights,” declares the alternative document titled ‘Vision 2025: ASEAN Women’s Blueprints for Alternative Regionalism’.

Over recent decades, Southeast Asia has experienced “three ‘miracles’: economic growth, the disappearance of mass atrocities, and efforts to promote regional peace and community building,” said Sorpong Peou, chairperson of the Department of Politics and Public Administration at Ryerson University in Canada. “Large-scale killings or genocide such as those in Indonesia (1965–66), Cambodia (1975–1978 under the Khmer Rouge), and East Timor (1975–1999 under the Indonesian occupation) “have all disappeared from contemporary Southeast Asia.”

“But authoritarianism keeps threatening to return,” wrote the Cambodian-born scholar in a commentary published by the East Asia Forum in March. “Below the surface of official declarations lies an acceptance among most ASEAN leaders that democracy and human rights should not be pushed too fast and too far.”

“Appreciation and interpretation of human rights are subject to national interest rather than international human rights standards,” said Jaymie Ann Reyes, program manager of the Working Group for an ASEAN Human Rights Mechanism. The Working Group, a coalition of individuals and organisations that include civil society and academics, engages ASEAN on specific rights initiatives.

“Some human rights themes and focuses are more acceptable to ASEAN such as women’s rights, children’s rights, and rights of persons with disabilities,” Reyes added.

All 10 member states have ratified the UN Conventions on the Elimination of All Forms of Discrimination Against Women, the Rights of the Child, and the Rights of Persons with Disabilities. “But there are more ‘sensitive’ issues that are not discussed for fear of violating the principle of ‘non-interference’”, she said.

One of these is refugee protection. The majority of ASEAN countries have not signed the 1951 UN Refugee Convention and the 1954 Statelessness Convention.

A wide range of other rights concerns continues to exist today across the region of 620 million people.

In Indonesia, the vigorous implementation of the death penalty, the enactment of more discriminatory laws against women, and violent attacks against religious minorities are bedevilling the government, according to Human Rights Watch.

Neighbouring Malaysia recently passed the National Security Council Act (NSCA), which empowers the government to declare martial law in areas where there are perceived security threats. Singapore’s Administration of Justice (Protection) Bill, passed in Parliament just a month ahead of the Vientiane summit, is seen as yet another attempt to muzzle freedom of expression in the city-state.

The decades-old Internal Security Act, which allows arrests without warrant and indefinite detention without trial, remains firmly in place in Singapore. (A similar law in Malaysia was abolished in 2012. Yet four years later, the NSCA came into force.)

Thailand’s new constitution — approved in a referendum on Aug. 7 — is seen to reinforce the military’s two-year hold on power.

The Bangkok-based Asian Forum for Human Rights and Development (FORUM-ASIA), sees “a trend of shrinking civil society space” despite “ASEAN’s aim to be a people-centred and people-oriented community”.

In Cambodia, government critics have been jailed, and more oppressive laws passed. For instance, Kem Ley, leader of the advocacy group Khmer for Khmer, was gunned down in broad daylight in the capital Phnom Penh on Jul. 10.

Although Myanmar has ceased to be a pariah state, its democratic transition has been marked by concern over discrimination against Rohingya Muslims, who are stateless in the mainly Buddhist country.

Critics have also dubbed as medieval Brunei’s announcement in October 2013 to impose a tough shariah penal code system, after its chairmanship of ASEAN that same year.

Yet ASEAN prides itself on having an “overarching human rights institution” such as the ASEAN Intergovernmental Commission on Human Rights (AICHR).

In fact, the ASEAN Chair’s statement in Vientiane commended the commission for “the progress of (its) work” and urged it to “promote the mainstreaming of human rights across all three pillars of the ASEAN Community”. But how such “progress” is measured and improves the rights landscape is not clear.

On the eve of the Vientiane summit, the ASEAN Parliamentarians for Human Rights (APHR) appealed to ASEAN leaders “to press the Lao government to cease the abuses that have consistently placed Laos at the bottom of rights and development indexes measuring rights, press freedom, democracy, religious freedom, and economic transparency.”

This referred to the unresolved disappearance of Lao activist Sombath Somphone, missing since December 2012. The Lao government had earlier said the issue had no place at the ASEAN meetings.

Looking back, ASEAN’s road to setting up a human rights commission – whose limitations its own commissioners concede – has been far from smooth. The commission’s creation was already a feat by itself.

ASEAN laid down the ASEAN Charter in 2008, which stipulated the creation of a human rights body. AICHR was created in 2009. In a process criticized by civil society for falling short of international standards, ASEAN drafted an ASEAN Human Rights Declaration in 2012.

“From being taboo, human rights principles were slowly integrated into ASEAN documents, institutions, and language. ASEAN bodies and government representatives are slowly adopting and using human rights language,” said Reyes of the Working Group for an ASEAN Human Rights Mechanism.

But the AICHR’s limited mandate does not include receiving and investigating rights complaints. “It is high time it (AICHR) evolved from promotion to the protection of human rights,” said a statement by the Thai Civil Society Network on ASEAN and AICHR.

Today, “all ASEAN human rights instruments recognise universal human rights standards with caveats: the principle of non-interference and due regard to the different culture, history, and socioeconomic condition in each ASEAN member state,” Ranyta Yusran, research fellow at the National University of Singapore’s Centre for International Law, said at a legal conference in Beijing in May.

Wahyuningrum of the Jakarta-based Human Rights Working Group said: “Human rights and democracy issues (in the region) are not going to simmer down. How is ASEAN going to keep up with these changes if it remains too bureaucratic and difficult to engage with?”

But she says there are encouraging signs. At a recent meeting she attended in Bangkok on legal aid and witness protection for victims of cross-border trafficking, participants acknowledged the political differences among the member states they were representing, but nevertheless focused on cooperation. The participants wanted to develop a cross-border witness protection standard operating procedure, which is a “good start,” she said.

Although AICHR has not adapted to “the changing context and structural challenges” of rights protection, Wahyuningrum credited it with initiating activities that have helped set “different platforms for subregional debate on human rights and clarified the ASEAN dimension on responses to human rights issues”.

For Reyes, there has also been “more robust engagement between and among non-governmental and civil society organizations”, though this faces challenges.

All eyes are now looking to 2017, when the Philippines takes its turn as ASEAN chair during the organization’s 50th year. The country has had a record of speaking up against rights abuses in ASEAN, but there are questions about how – and whether it can still do this credibly – given the furore over extrajudicial killings in the Duterte government’s crackdown on illegal drugs. (END/Reporting ASEAN/ Edited by J Son)