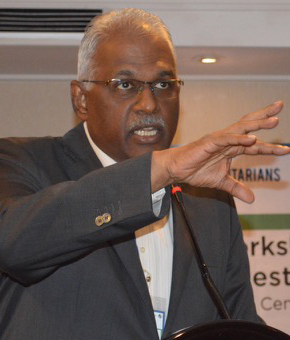 Home » Views and Points » Q & A: ASEAN A Toothless Tiger

BANGKOK, Mar 9 (Reporting ASEAN) – ASEAN’s 50th anniversary raises an opportunity for honest stock-taking, including of how ASEAN’s old habits such as like non-interference. How can the association cling on to a policy, even if it says it has worked in the past, given its growing need to manage growing social, rights and other issues in a grouping that calls itself a Community? 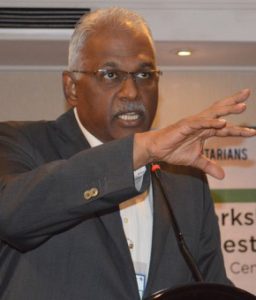 In this Q & A, with Reporting ASEAN founder/editor Johanna Son, Malaysia’s MP Charles Santiago, head of the ASEAN Parliamentarians for Human Rights (APHR), argues that ASEAN’s record on pushing human rights has lagged way beyond the attention it gives to economic and business interests. ASEAN needs to adapt to the times – and outgrow habits that in the long run, threaten the contributions it has made the regional stability thus far, he says.

Formed in 2013, APHR is made up of incumbent and former parliamentarians who lobby for rights issues and regional responses to such concerns in the region. In recent weeks, it has called for an international probe into Myanmar’s Rakhine state, criticised Cambodia’s crackdown on political parties and discussed attempts to pass laws reintroducing the death penalty in the Philippines.

Reporting ASEAN: If you were to list two areas showing ASEAN’s biggest achievements in the last 50 years and another two showing its weakest points, what would these be?

Santiago: ASEAN has proven itself to be an important mechanism for regional dialogue and dispute resolution, which has contributed to largely peaceful relations between neighbors. However, for many ASEAN citizens, the benefits of these peaceful relations do not trickle down. While ASEAN countries have not seen a major military conflict between member states in the past decades, that does not mean that people are not suffering from violence and other abuses. It is, in part, ASEAN’s inflexible approach to maintaining its “non-interference” principle that contributes to this sorry situation. ASEAN’s chief failure has been its inability to address the actions of predatory, abusive governments, particularly where there are clear regional implications of these actions. In this sense, it is failing in its central mission of being a “people-centred” regional grouping. Another weak point is that increasingly ASEAN member countries have become vulnerable to foreign power intervention, which might not augur well for ASEAN-stated goals of neutrality on the global stage.

Reporting ASEAN: Human rights should be an accepted norm in ASEAN given that it is in the charter and there is a human rights declaration as well, but it does not appear to be so. Why is this? Of what import then are these documents?

Santiago: The ASEAN Charter and other documents include guarantees of human rights and fundamental freedoms. But in practice, there is no enforcement mechanism to ensure compliance. If a government violates the human rights of its citizens, ASEAN, given its structure and restrictions, cannot support those citizens in seeking protection or redress. These regional agreements need to be binding if they are to be effective. Still, the fundamental guarantees included in the ASEAN Charter and the ASEAN Human Rights Declaration, in combination with the international commitments of member states and international human rights law in general, are a basis for citizens to stand up and demand their rights.

Reporting ASEAN: What do you see for ASEAN’s brand of addressing human rights in the decades ahead?

Santiago: The problem ASEAN will face is that its inflexible approach to implementing its “non-interference” principle will increasingly hinder its ability to deal with crucial questions—not only related to human rights, but also other challenges. On key issues, ASEAN has repeatedly proven itself to be a toothless tiger, and if it doesn’t adapt, it will undermine confidence in the association and its overall effectiveness.

Reporting ASEAN: Do you have concerns about the rights aspect of ASEAN’s process of regional integration and its impact, and what would these areas be? It seems there has not been much talk about these?

Santiago: ASEAN regional integration has focused primarily on the economic pillar. This economic integration, which is fashioned to look as if it prioritises the welfare of the people, in reality only focuses on business and corporate interests and not the interests of the people as a whole. This includes prioritising free trade agreements such as the Regional Comprehensive Economic Partnership, and a failure to adequately address the social dimension of integration. Economic integration has thus far been nothing but a race to the bottom, with domestic and global capital seeking to exploit cheap labour and in search of profitable investment at the expense of the workers and people. Furthermore, rights violations associated with investments region-wide are a growing concern for too many of ASEAN’s people.

Reporting ASEAN: Would you say that the ASEAN way has worked somehow in the case of the Rohingya – in that a retreat was held in December, rather than totally no discussion of it? Do you see any difference in ASEAN’s treatment of the Rohingya matter today compared to how it handled other ticklish issues? What has changed, if any?

Santiago: ASEAN has been more willing to confront the Rohingya issue than other thorny questions, and this is an important and positive development. But thus far, it hasn’t been enough to stop serious atrocities. The Yangon meeting in December 2016 is a good example of this failure. It was initially a positive sign to see Myanmar calling a meeting on this topic—one which it had previously blocked discussion of at the regional level. And it’s important to note that heightened public scrutiny and pressure from rights groups and even governments, like Malaysia, led to this outcome. But the meeting proved to be all talk, and the military continued to wage its brutal campaign as the diplomats sat and exchanged pleasantries. This is not the image of an ASEAN that is truly people-centred.

Is it a small sign that although ASEAN adheres to the non-interference policy, this policy may be changing a bit, even if in a small way. In the Rohingya matter, for instance, there is a tough cop (Malaysia) and a soft cop (Indonesia talking to Myanmar quietly and liaising with Bangladesh?)

It is a small sign, but ASEAN needs to do more. The “non-interference” principle is a barrier to human rights protections in Southeast Asia. We are dealing with incredibly serious situation here: the UN has alleged likely crimes against humanity and possible ethnic cleansing. Indonesia and Malaysia’s moves are a good first step. The next step is for ASEAN states to lead an international push to properly investigate these alleged abuses. (END)