Home » Features » ASEAN Study Tour Gets Farmers, Gov’ts Talking to Each Other

CHANTABURI, Thailand, Apr 7 (Reporting ASEAN) – In an open space resembling an aircraft hangar, onlookers were busy examining a curious display. They weren’t looking at aeroplane parts, but at pairs of mangosteens on pink plastic plates that were laid out in neat rows.

Mangosteens are an important crop in eastern Thai province of Chanthaburi, located 230 km from Bangkok. Here, that means they get their time in the spotlight in ‘beauty pageants’, where farmers of the most perfect specimens of the purple spherical fruits can walk home with lawnmowers, stereo sets and harvesting baskets.

This is just one of the many activities the Khao Kichakood Agricultural Cooperative, set up in 1994, offers to its 1,400 members. Offering credit, savings, purchasing and marketing services, the cooperative aims to improve the lives of farmers in the province. 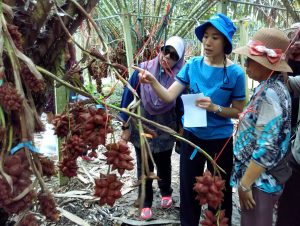 “Agriculture is and always has been the backbone of the Thai economy,” Jantida Meedech, deputy secretary-general of the Office of Agricultural Economics, said here in late March. Agriculture accounts for only a tenth of the nation’s 38 billion-US dollar Gross Domestic Product, and more attention is needed to ensure that farmers reap the benefits of their contribution to the national economy, he added. “The livelihoods of those in the agricultural sector are falling behind in terms of quality of life compared to other sectors”.

Out of Thailand’s 67 million people, 24 million work in the agricultural sector. The average farming household earns 4,800 dollars a year, or half the country’s per capita income. The Khao Kichakood cooperative seeks to address this income gap by encouraging farmers to look beyond their fields to the wider value chain.

It is this model that 30 participants from ASEAN farming organisations and government agencies came to observe in a cross-country initiative that the ASEAN Farmers’ Organisations Support Programme (AFOSP) organised to deepen interaction between farmers in ASEAN countries and ASEAN’s sectoral bodies.

In the ‘ASEAN Learning Route on Agricultural Cooperatives’ of the programme, government officials and farmers’ groups from seven countries went on a rare study tour together. They spent two days learning about cooperatives in Thailand on Mar. 28-30 before heading to the Philippines to study the model there.

“In ASEAN, there’s a lot of diversity in the cooperatives,” Norlizah Binti Muhamad, director of Malaysia’s Farmers Organisation Authority. Seeing how agricultural cooperatives are run in Thailand made the participants in the ASEAN Learning Route reflect on their own domestic practices.

“Compared to Thailand, we need to do a lot of things. We need a lot of improvement,” admitted Thaung Nyunt, chief executive of the Central Cooperation Committee, Agriculture and Farmer Federation of Myanmar.

For Cambodia, the challenge is to convince its farmers of the benefits of joining cooperatives. “The farmers in Thailand understand and are very aware of how a cooperative works. But in Cambodia, we’re still in the stage of mobilising the farmers to become members,” said Sarun An, chairwoman of the Svay Chrum Agricultural Cooperative.

What stood out for Luisita Zarsadias Esmao, president of Lakambini Pilipinas Rural Women Association Inc, was the contrast in mindsets across the region. “There is a need for an attitude change in the Filipino farmer when engaging in co-operatives. The Filipino farmer tends to be more individualistic and there is some difficulty in establishing a stake in cooperative initiatives.”

Farmers had different views about the role of a cooperative. While the Thai participants were very clear that a cooperative’s goal is to bring farmers more income, others felt this model lacks the true spirit of a social enterprise.

“You should follow the concept and philosophy of a co-operative,” said Zainal Fuad of La Via Campesina, an international movement representing 200 million farmers worldwide and co-organiser of the tour. Farmers’ cooperatives should aim to empower them politically and socially, he added. 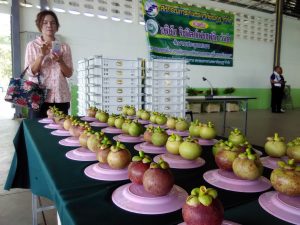 A woman takes a photograph of mangosteens on display at the the Khao Kichakood Cooperative. Picture: Mia Gomez

Despite the contrasting views, the farmers had a lot in common – besides a shared love for the king of fruit that was evident during the March study trip. Chief among the recurring themes in both the formal discussions and informal chats was the need to find ways to attract younger people to farming.

Vichai Prakobsap, a farmer for 30 years before he was ordained as a monk, said, “It’s long past my time; I’m no longer the leader. The next generation must lead the way.”

The growing demand for organic produce and higher food-safety standards presents cooperatives with an opportunity, many pointed out. “The world is changing fast. Everybody is afraid of dying. The next highlight for us is to focus on the quality of products. From now on, we won’t sell milled rice, we will sell milled organic rice,” said Cherdchai Promkaew, director of Thailand’s Bureau of Cooperative Business Development.

With Thailand reeling under its worst drought in 20 years and rice yields in Asia expected to decline by up to 2 percent every 10 years, farmers shared how they have been affected by climate change and extreme weather patterns. “On the face of it, the yields are seriously and severely damaged,” said Sasithorn Wiset of the Chanthaburi Cooperative Development Department.

Beyond their local concerns, many farmers look with worry at the impact on the agriculture sector of economic integration under the ASEAN Economic Community (AEC), in particular the onset of increased competition and imposition of new non-tariff barriers.

“With the AEC, we see more challenges than opportunities. We cannot compete with big investors and countries like China. We have to adopt a survival strategy,” conceded Phoutthasinh Phimmachanh, general manager of the Lao Farmer Network.

The fact that the ‘ASEAN Learning Route’ was held was already progress in the AFOSP programme’s aim to get ASEAN farmers and governments talking to each other – since there are not enough venues for this.

Indeed, the Thai part of the ASEAN Learning Route laid bare the need for greater understanding between the two sides. As Zainal recounted to the group: “There is a joke in Indonesia – ‘to make the co-operative good for members, please delete government members’.”

The discussions and case studies here showed a distinct disconnect between authorities and farmers. Said Eko Yudi Sukrianto of the Indonesian Peasant Alliance: “There are many differences between what the government and the farmers say. I want to know the truth, I want to apply the knowledge but I’m not getting the information.” (END/Reporting ASEAN)