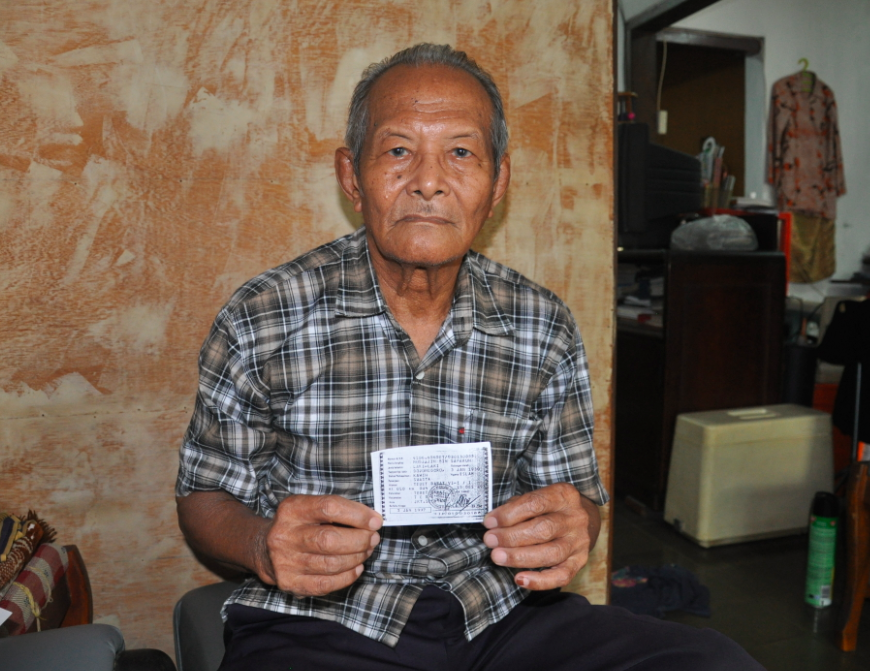 JAKARTA, Dec 3 (IPS Asia-Pacific) – At the age of 82 years, former political detainee Mudjayin wonders if he will ever see justice served.

“Yes, my friends and I submitted our human rights case report to the ASEAN Secretariat, but we have not heard anything on what they did with the report,” said Mudjayin, one of tens of thousands of Indonesians rounded up by the military following the coup attempt on Sep. 30, 1965 that saw seven army generals killed.

The army blamed that abortive coup on the Indonesian Communist Party, and it led to a campaign of mass killings that in the following days and weeks led to the deaths of hundreds of thousands of alleged communists. This bloody event also led to the rise of Suharto as the architect of the ‘New Order’ dictatorial regime, which held power for more than three decades until his fall amid public protests in 1998.

“One morning in October 1965, some military personnel showed up here and invited me to the local military office. I went there and was arrested immediately without a warrant,” he recalled in an interview at his house in Tebet, South Jakarta.

For the next 14 years, he was detained without being charged and tried. But in fact, he was all along classified as a Class B detainee – meaning that no evidence to link him with the Indonesian Communist Party or the September coup has been established.

Mudjayin was finally released in 1979, but did not demand justice until after former president Suharto stepped down in May 1998. Aided by rights groups such as the National Committee for Missing Persons and Victims of Violence (Kontras), he and other former political detainees have occasionally called for justice.

“We want the government to rehabilitate us,” he said in despair.

In March 2010, Mudjayin and friends took their case to then recently formed ASEAN Intergovernmental Commission on Human Rights (AICHR), the first regional rights body of an organisation that has traditionally avoided addressing issues that were seen as domestic internal matters. 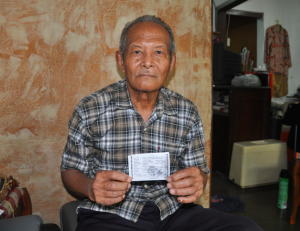 Mudjayin with a copy of his old ID card identifying him as a former political detainee. Photo: Kanis Dursin

Together with Mudjayin were parents and relatives of students shot dead during anti-government protests in Indonesia in 1998 and 1999, relatives of pro-democracy activists kidnapped in 1997 and 1998, relatives of 32 journalists slain in Maguindanao, southern Philippines in 1999, and some rights victims from Burma.

All 10 rights commissioners, representing each of the ASEAN member countries, were in Jakarta then to attend their first official meeting after being appointed in October 2009. But none showed up to meet them, let alone to receive their complaint, recalls Mudjayin.

“We (AICHR) are not mandated to deal with individual claims,” rights commissioner Rafendi Djamin of Indonesia said in an interview.

Set up in October 2009, AICHR is tasked to be in charge of promoting and protecting human rights and fundamental freedoms of ASEAN peoples, enhancing regional cooperation on the promotion and protection of human rights, and upholding international human rights standards.

Rights defenders in South-east Asia hailed the AICHR’s foundation, but lamented its limited power to promote and uphold human rights in the region.

“AICHR has been given a very weak terms of reference that limits its mandates, authority and powers to promote and protect human rights,” said Yap Swee Seng, executive director of Bangkok-based Asian Forum for Human Rights and Development.

“The commission was further rendered ineffective and non-independent when some member states appointed government officials to sit in the commission as their representatives, rather than independent human rights experts,” he continued.

All but two of the commissioners are government officials or diplomats. The two are Indonesia’s Rafendi Djamin, a human rights activist, and Thailand’s Sriprapha Petcharamesree, an academic.

The coordinator of the National Committee for Missing Persons and Victims of Violence (Kontras), Haris Azhar, said the commission was institutionally problematic. “The fact that AICHR reports to the ASEAN Ministerial Meeting indicates that the commission is not independent and that it serves as an auxiliary body to AMM,” Haris said.

“AICHR has also spent its efforts to draft the ASEAN Human Rights Declaration,” pointed out Danny Chian Siong Lee, director of community affairs development in the ASEAN secretariat based here in the Indonesian capital.

However, the draft has been the topic of much debate among South-east Asia’s rights activists, which have been criticising it for being too weak and setting standards that fall short of the Universal Declaration of Human Rights.

ASEAN leaders adopted this declaration, which contains nine general principles, at their summit in Cambodia in November 2012. It lists civil and political rights; economic, social and cultural rights; the right to development and the right to peace.

“The right to development is an inalienable human right by virtue of which every human person and the peoples of ASEAN are entitled to participate in, contribute to, enjoy and benefit equitably and sustainably from economic, social, cultural and political development,” the declaration said.

“While development facilitates and is necessary for the enjoyment of all human rights, the lack of development may not be invoked to justify the violations of internationally recognised human rights,” it added.

But overall, it is weaker than the Universal Declaration, she pointed out. “The draft still uses public morality and national particularities as limitation of rights and does not protect the rights of lesbians, gay, bisexual, and transgender, and the rights of indigenous people,” Rena said. “The definition of public morality varies and is very subjective.”

She was referring to part of the declaration that says: “All human rights are universal, indivisible, interdependent and interrelated. All human rights and fundamental freedoms in this Declaration must be treated in a fair and equal manner, on the same footing and with the same emphasis. At the same time, the realisation of human rights must be considered in the regional and national context bearing in mind different political, economic, legal, social, cultural, historical and religious backgrounds.”

Yap criticised the commission’s lack of transparency. “The performance of AICHR in the first two years in 2010-2011 has been unfortunately very poor, marked by extreme lacking of transparency and consultation with stakeholders in the process as well as the content of their work,” he said.

“This was illustrated in the non-disclosure of any documents that the AICHR has adopted since its establishment in 2009, including their annual report to the ASEAN Foreign Ministers in 2011,” Yap added.

The challenge for ASEAN member states, he explained, is how to create “a regional rights commission that would effectively address human rights violations and contribute to regional peace, stability and sustainable development”.

“ASEAN should appoint independent human rights experts to sit in the AICHR, rather than government officials,” Yap pointed out.

He also called on ASEAN to review AICHR’s terms of reference to make it truly independent with the necessary mandates and powers. “The ASEAN Member States also need to provide adequate resources and financial autonomy for the AICHR to function effectively,” Yap said.

Rafendi concurred that he also wishes to see a more powerful commission. “The commission’s terms of reference will be reviewed in 2014,” he said.

For his part, former political detainee Mudjayin mused: “I know that the ASEAN rights body has no authority to investigate individual cases like ours, but we have to bring it up to the surface to spark public discourse and press the (Indonesian) government to resolve past rights cases.”

(*This story was produced as part of the ‘Reporting Development in ASEAN Series’ – www.reportingasean.net – of IPS Asia-Pacific. The series is with the support of the International Development Resource Centre.’)