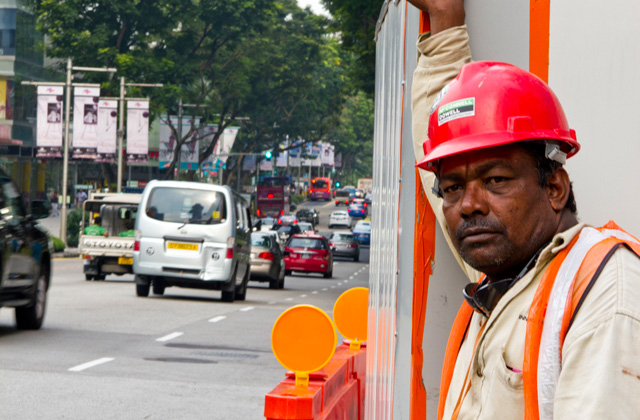 In December 2009, Indonesia and the Philippines produced the initial draft of a proposal to give flesh to the two-year-old declaration of the Association of Southeast Asian Nations (ASEAN) to promote and protect the rights of migrant workers within the region.

But the draft, especially on the contentious issue of undocumented workers, quickly came under fire from two other countries: Malaysia and Thailand.

Malaysia strongly opposed the inclusion of undocumented foreign workers and families of migrant workers within the scope of the proposed regional instrument on labour migration.

Thailand, on the other hand, wanted a clear distinction between documented and undocumented workers, and insisted that rights accorded migrant workers should not exceed those granted to the locals.

The deadlock highlights the conflicting interests of labour-sending countries like Indonesia and the Philippines and of labour-receiving countries like Malaysia and Thailand. It partly explains why it will likely take years for the regional instrument to come into being.

Conflicting interests among the member states “are reflected in their opposing position, commitment and approach to dealing with issues and problems concerning migrant workers,” writes Ben Perkasa, director of the Foreign Service School in Indonesia, in the English-language Jakarta Post in May. Perkasa is Indonesia’s former representative to the ASEAN Committee on Migrant Workers (ACMW), which is in charge of drafting the proposed instrument.

A major source of disagreement among countries is the nature of the instrument that ASEAN will eventually adopt.

Source countries interpret the instrument “as an international agreement” and thus binding, while others see it only as “no more than guidance, which is not legally binding,” said Perkasa.

Reports reaching national and regional rights groups say the instrument would be merely called an “ASEAN Agreement” instead of a “Framework Instrument on the Protection and Promotion of Rights of Migrant Workers.” A copy of the “zero draft” obtained for this report confirms that a non-binding ASEAN instrument is indeed in the works.

Should this happen, Phil Robertson, deputy director of the Asia division of Human Rights Watch, said it would be “a cruel joke” on migrant workers of the region.

“The question to ask the ASEAN leaders is, Why can you negotiate a binding agreement when it comes to foreign domestic investment or reduction of trade tariffs, but you fail to do so when it comes to making an agreement to protect your people when they leave the country to work?” he said.

Sinapan Samydorai, convenor of the non-governmental Task Force on ASEAN Migrant Workers (TF-AMW) based in Singapore, said there are fears that the instrument would take the form of a convention—legally binding, but only after it is ratified. This means the 10 member states of ASEAN could simply drag their feet on the ratification of the instrument.

“The excessive differences in the drafting process resulted in four years of deadlock, one of the longest negotiation processes in ASEAN,” Perkasa said.

Philippine Overseas Employment Administration (POEA) head Hans Cacdac who represents the country in the ACMW, has witnessed this deep division as a former member of drafting team of the ACMW.

During a meeting in Singapore in April, Malaysia wanted the team “to clarify the common understanding between the member states” on the basic concepts of protection of migrant workers, he said. This, in effect, meant bringing the whole discussion back to square one.

Before the April meeting, the team had already reached a consensus in September 2011 to discuss the major issues dividing the countries in phases: Phase 1 (2012) on regular migrant workers; Phase 2 (2013) on undocumented workers and migrant workers’ families; and the third and final phase (2014) on the form of the instrument, whether it will legally binding or not.

Cacdac sees the glass half full.

“Three or four years ago, we found it extremely hardly to push the discussion of these issues off the ground,” he said. “At least today we have a timeline.”

The Ministry of Manpower in Singapore also said ASEAN members have made “commendable progress” in drafting the ACMW Instrument since the declaration was adopted in 2007.

“(They) have demonstrated during discussions that they could put aside national differences as they work towards achieving the shared goal of protecting and promoting the rights of migrant workers,” it said.

Civil society groups and rights advocates, however, see the proverbial glass as all but empty.

“Regrettably, there has been no appreciable progress,” rues Robertson, who is also the TF-AMW’s technical adviser.

The ASEAN Secretariat declined to comment on the drafting of the ASEAN instrument. “I am afraid that we are not (at) liberty to answer your questions because the process is still at a preliminary stage,” said Mega Arena, assistant director and head of Social Welfare, Women, Labour and Migrant Workers Division at ASEAN.

Without a regional mechanism for migrant worker protection in place, the five million intra-ASEAN migrant workers have only agreements forged between their country and another member state to fall back on to protect their rights, if at all these exist or are worker-friendly.

Bilateral labour agreements (BLAs), which are binding, and memoranda of understanding (MOUs), which are nonbinding and less formal, are traditional mechanisms for managing migration flows and addressing migrant worker concerns.

Forging labour agreements, including MOUs, is a “long and tedious process” owing to the reluctance of destination countries to enter into BLAs, Stella Go, chairperson of the Philippine Migration Research Network, said in a paper presented at a forum on Labour Migration in Asia in January 2011.

Go said these countries argue that “foreign workers are subject to the same laws as nationals” anyway and that “formal agreement with one country could open (the) floodgate of proposals from other countries.”

Human Rights Watch’s Robertson cited, for example, the bilateral MOUs Thailand has with neighbouring Mekong countries—Burma, Cambodia and Laos—and those of the Philippines with many countries.

These agreements, he said, “have been continually thwarted by failures to control ‘legal’ manpower/labour recruitment companies in labour-sending countries which continue to charge excessive fees to intending migrant workers, and failure of labour-receiving countries to provide adequate protection for workers even with their legal status.”

Adisorn Kerdmongkol, a senior policy adviser with the Thailand-based International Rescue Committee, which assists migrants and cross-border refugees, said bilateral agreements between Thailand and other Mekong countries have resulted in increased protections for migrant workers, but many issues remain unresolved such as high recruitment fees and the prohibition for workers to change employers unless they meet certain conditions.

“There has not been much progress,” he said.

Indonesia’s 2006 MOU with Malaysia on migrant workers did not prevent the abuse of a number of its domestic workers who had slaved it out within the backyard of the region’s emerging economic power. This prompted the Indonesian government to halt the deployment of Indonesian domestic helpers to Malaysia in 2009.

The moratorium, however, “failed to result in effective changes to increase the protection of its workers’ rights,” Irene Fernandez, executive director of Tenaganita, a Kuala Lumpur-based NGO helping migrant workers, said.

Malaysia soon turned to Cambodia for its direly needed supply of domestic workers. In 2011, the Cambodian government, following in Indonesia’s footsteps, banned the sending of workers to Malaysia following a trail of abuses against, even deaths of, some Cambodians while serving their employers.

On May 30, 2011, the MOU between Malaysia and Indonesia was revised to include some positive changes. Yet it did not set a minimum wage and allowed recruiters to collect several months of the workers’ salaries as fees.

If anything, source or origin countries share part of the blame for the hapless state of many of their migrant workers.

The “labour export policies of the source countries have remained the same,” said Fernandez, citing the Philippines—the biggest labour-sending country in the region—as a “classic example.”

Vicente Cabe, Philippine labour attaché in Singapore, said, however, sending states must work within the system of receiving countries. “We have to understand that they (host countries) have to balance their interests.”

Oftentimes, though, these interests are skewed heavily against those of migrant workers, leaving them at the mercy of their employers.

Thus, unless they conform to international core labour standards—and oftentimes they do not—bilateral labour agreements and similar mechanisms cannot work.

This again brings to the fore the need for a binding and rights-based regional mechanism, CSOs and human rights advocates say.

What labour-sending countries need to do is push their provisions in the proposed ASEAN instrument on labour migration “more strongly” in the face of vigorous opposition from major receiving states to certain provisions favourable to migrant workers, Fernandez said.

“It appears that those governments working to frustrate a comprehensive agreement to protect migrant workers have more political will to stop progress than those trying to promote such a deal,” Robertson said.

POEA’s Cacdac said the Philippines remains firm in pushing for rights-based provisions and in convincing receiving states to accept the provisions on undocumented workers and families of migrant workers.

“More protection and security to the workers need to be emphasized (in the planned instrument),” said Fitri Riyanti, minister counsellor for political affairs of the Indonesian Embassy in the Philippines.

But more important, it is time “for advocacy at the national level to press governments to demand progress by the ACMW,” said Robertson.

Such advocacy should be pursued by the ASEAN peoples themselves, human rights advocates say.

Said Fernandez: “I would like to see a very visible, consolidated ASEAN people’s movement (that) will be a force to reckon with.”

(This story and accompanying photos were produced under the “Reporting Development in ASEAN” series of IPS Asia-Pacific, a program supported by the International Development Research Centre.)

This story can also be seen in Vera Files: