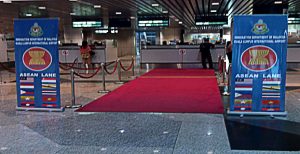 A view of the ASEAN Lane at the Kuala Lumpur International Airport Photo: Kavi Chongkittavorn

KUALA LUMPUR, Jun 8 (Reporting ASEAN) – At the Kuala Lumpur International Airport, two special ASEAN Lanes stand out for the use of passengers holding passports from the organisation’s 10 member countries. At the same airport’s departure terminal are similar ASEAN Lanes for passengers leaving Malaysia.

Since 2015, Malaysia has become the first country within ASEAN to properly implement the ASEAN Lane, a long-awaited action plan as part of the organisation’s commitments to deepen ASEAN identity.

Back at their Hanoi summit in 2010, ASEAN leaders decided that after the Master Plan of ASEAN Connectivity is drawn up, all member nations would set up ASEAN lanes at their international airports to promote people-to-people exchanges as part of overall community-building efforts. The other areas of linkages include infrastructure and institutional connectivity.

In the past five years, each ASEAN Chair temporarily established ASEAN Lanes for special occasions, especially during the annual ASEAN foreign ministerial meeting, the ASEAN Summit and related meetings. But none of them have actually kept the special lane, except Malaysia and Thailand.

Under the ASEAN Vision 2015 that ASEAN leaders adopted at their 2015 summit in Kuala Lumpur, ASEAN will become more integrated in all dimensions – in terms of the economy, political/security as well as society/culture. Therefore, it is imperative that ASEAN implement a recommendation that is among the easiest to deliver – the setting up of the ASEAN Lane as part of ASEAN’s vision to increase people-to-people contacts among its citizens.

As early as 1995, Thailand established a special counter for visitors holding ASEAN passports to commemorate the Fifth ASEAN Summit, where the country served as chair for the first time. Wanting to impress ASEAN colleagues, then Prime Minister Banharn Silapa-archa personally instructed the Immigration Bureau to set up the ASEAN channel, as it was called at the time. The move was also aimed at encouraging ASEAN tourists to take advantage of the assigned fast-track lanes.

But as it turned out, it was the mostly foreign tourists visiting Thailand ­– and not ASEAN ones – that were using the Special ASEAN Lane.

Several internal surveys conducted by the Tourism Authority of Thailand and the Immigration Bureau showed that ASEAN tourists’ awareness of the organisation was very low because they did not feel a strong sense of belonging to ASEAN. The situation today is not much different – to think that many years ago, the idea of community-building, which would eventually lead to the launch of the ASEAN Community, was still far-fetched at best.

As the ASEAN Community enters its sixth month these days, ASEAN member nations still have not implemented the ASEAN Lane in full, as they pledged to.

Besides Malaysia, Thailand and Vietnam have established the special lanes, but they are not fully enforced and implemented. This is in stark contrast to Malaysia, where all passport holders from ASEAN must use only ASEAN Lanes and not the usual immigration lanes assigned to other foreigners. 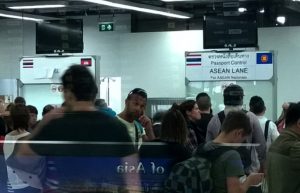 Other measures to increase people-to-people exchanges include the adoption of common consular procedures to assist ASEAN nationals living overseas, where there are no missions from their countries. The idea of using a common business visa for business people travelling around the region must also be put into practice immediately.

These actions are low-lying fruits that can be implemented right away, without financial burden. There is already a special lane for Asia-Pacific Economic Cooperation (APEC) cardholders in international airports in ASEAN countries.

All members of the European Union (EU) have set up the EU Lane and Non-EU Lane for travellers passing through its airports, as part of defining the EU’s identity. Ideally, in ASEAN, ASEAN Lanes and Non-ASEAN Lanes should have been set up immediately after the ASEAN Community’s launch at the end of 2015.

Some regional analysts have commented that the main obstacle to the implementation of the ASEAN Lanes depend on each member country’s attitude towards ASEAN citizens as a whole. Those countries with ASEAN Lanes recognise and respect fellow ASEAN citizens as being part of a shared community made up of 630 million people. But the recalcitrance of those member nations that do not give much priority to setting up the special lane does not augur well for their professed commitment to building ASEAN spirit and solidarity.

While a few leading ASEAN members are taking the lead in promoting free trade and other efforts to better integrate the organisation’s old and new members, they have however completely ignored the matter of launching the ASEAN Lanes. It is imperative that all concerned agencies from ASEAN member countries get together and harmonise this immigration procedure.

Another reason behind some ASEAN members’ delay in complying with the ASEAN Lane plan is their inability thus yet to fulfill other commitments under the ASEAN Community plans that are considered more urgent. In fact, many member countries believe that the ASEAN Lanes will inevitably come up when the process of ASEAN Community integration is complete – as it did in the case of the EU. (END/Reporting ASEAN – Edited by Johanna Son)

*Kavi Chongkittavorn is a columnist with ‘The Nation’ newspaper, and senior fellow at the Institute of Security and International Studies at Chulalongkorn University in Bangkok, Thailand.