MANILA, Oct 14 (Reporting ASEAN) — Until recent years, most ASEAN member countries did not have laws protecting the rights of persons with disabilities. In some instances, amendments to existing laws to protect this sector seemed an afterthought.

But the Philippines was a cut above the rest. It was nearly a century ago when the country passed its first law on disability although it did not necessarily hit the ground running.

In contrast, Thailand, considered a leader in Southeast Asia for promoting disability rights, had its first disability law only in 1991. Malaysia, one of the region’s more developed countries, took almost a decade before introducing an amendment to its Uniform Building By-Laws, a subsidiary building code enacted in 1984, to provide disabled-friendly facilities. 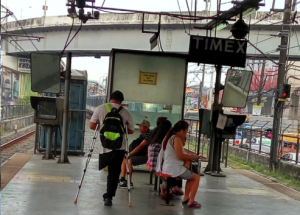 Today, a string of major laws and a new constitution later, has the Philippines emerged as a paragon of a disability-inclusive society in Southeast Asia? Have other countries stepped up to the disability challenge?

Long before the Association of Southeast Asian Nations (ASEAN) made a formal commitment to mainstream disability rights, the Philippines had embarked on a legislative path in pursuit of a similar goal, beginning in 1917, when the notion of disability was still confined to physical impairment.

It was also the first ASEAN country to ratify the United Nations Convention on the Rights of Persons with Disabilities — in April 2008, just three months ahead of Thailand.

Yet almost two and a half decades since the Philippines’ legislation of a magna carta on the rights of disabled people, achieving a more inclusive society remains a struggle, if not mere aspiration, for persons with disabilities in this country of 100 million people.

A quick scan of public transport systems bears this out. Despite the existence of disability laws, assistive devices such as portable bus ramps are missing across the country. Most elevators and escalators providing access to Metro Manila’s rapid train systems are non-operational at best. Just as glaring is the absence of accessible pedestrian signals and disabled-friendly roads.

It is only now that inclusive education is being pursued aggressively, according to Rizalio Sanchez, chief of the information and communications division of the National Council on Disability Affairs (NDCA).

Yet the Philippines has long been a signatory to the 1994 Salamanca Statement on Special Needs Education, which says that “ordinary schools should accommodate all children, regardless of their physical, intellectual, emotional, social, linguistic or other conditions”.

Likewise, actions by some government agencies run counter to the overall commitment to the rights of people with disabilities. For instance, the 2015 Philippine Census of Population and Housing excluded questions on disability, which was not the case with the 2010 edition, Sanchez rued.

To be sure, PWDs have benefited from the laws passed on their behalf. Yet, well-crafted laws and public commitments to international standards that remain largely on paper are cold comfort for many persons with disabilities.

This gap seen in the Philippines between policy and laws on one hand, and everyday realities on the other,  is not unique in the ASEAN region.

While progress has been made in Vietnam, “only around 2 percent of preschool and primary schools … are inclusive and 95 percent of children with disabilities still do not have access to school,” says the first-ever ‘World Report on Disability’, jointly published by the World Health Organization (WHO) and World Bank in 2011.

Thailand, Malaysia, and Singapore are no exceptions either amid poor or sporadic implementation of existing laws, ambiguous definitions of disability, and inadequate data, alongside a host of other issues confronting PWD.

Like other ASEAN countries, the Philippine government still does not have accurate data on the number of people with disabilities, said Sanchez. Based on the 2010 Census, which preceded the 2015 one, only 1.4 million people, or 1.57 percent, have disabilities. This contrasts sharply with WHO’s global disability prevalence of 15 percent.

Sanchez added that the Philippine figure is low since it does not cover “non-apparent” disabilities or disorders, which are on the rise. A case in point is autism, the global incidence of which now stands at 1:68, according to the US-based Centres for Disease Control and Prevention.

Mona Magno-Veluz, president of the Autism Society Philippines, said 1.2 million Filipinos have autism spectrum disorder, among whom is her son. But only 10 percent of them have been diagnosed as having what she described as an “organic disorder of neural development” in a recent forum with local media organised by Unilab Foundation and Probe Media Foundation.

ASEAN member states have only begun to recognise autism as a specific disability, explained Dang Koe, president of the ASEAN Autism Network and chair emeritus of Autism Society of the Philippines. “It’s only the Philippines that has a specific law on autism, Presidential Proclamation 711, which declares the third week of January as the National Autism Consciousness Week.” she said.

Against the backdrop of the apparent lack of a consistent and common approach to identifying and measuring disability, the disability policy landscape in the region is uneven at best.

The prevalence rate for disabilities in Southeast Asia is 16 percent, according to the World Report on Disability. Yet PWD population data gathered by ESCAP and WHO/World Bank are “considered underestimated as most of the countries still use a narrow definition of disability,” said the Swedish International Development Cooperation Agency (SIDA) in its 2014 report ‘Disability Rights in Southeast Asia’. 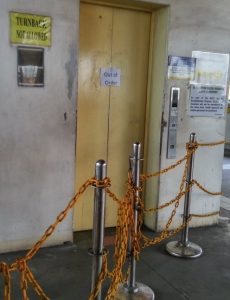 Accessibility for PWDs remains a challenge in the Philippines. Photo: T Bacalla

All this is happening at a time when ASEAN has collectively committed itself to mainstreaming disability rights, following two regional dialogues for this purpose last year and this year. “The dialogue brought together varied stakeholders to discuss the rights of persons with disabilities and how to enhance their promotion and protection in the ASEAN Community,” said the regional grouping in a press statement.

“This initiative seeks to implement the ASEAN Community Vision 2025 as well as the ASEAN Human Rights Declaration in mainstreaming the rights of persons with disabilities across the three pillars of ASEAN (political-security, economic, and socio-cultural),” it added.

While ASEAN’s inclusion of the rights of persons with disability in its regional integration process is indeed a major step forward, it needs to be asked how mainstreaming can be done without very basic elements such as reliable data on disability. This alone makes comparison, and coherent and effective regionwide policy, an outright challenge.

Seree Nonthasoot, Thailand’s representative to the ASEAN Intergovernmental Commission for Human Rights (AICHR), said: “Some ASEAN countries report less than 1 percent the population who are disabled while others provide no statistics at all. Since effective policy framework must be based on reliable evidence and statistics, identification of people with disabilities is essential for the promotion and protection of their rights.”

There could be as many as 100 million people with disabilities in ASEAN (out of its 620 million population), he wrote in the English-language daily ‘Bangkok Post’.

Another major challenge to ASEAN is that “significant legal and policy gaps remain”, the SIDA report said, although member governments and ASEAN as a whole have taken a number of legislative and policy steps to advance the rights of PWD. Laos, for instance, guarantees the right of persons with disabilities to assistance yet bars individuals with mental disorders from voting.

Amid these stark realities, some bright spots have emerged in ASEAN’s disability landscape.

“We have noted remarkable positive changes in terms of the empowerment and promotion of the rights of persons with disabilities, as well as a barrier-free and inclusive society in the region,” said Ryuhei Sano, general manager of the Bangkok-based Asia-Pacific Development Centre on Disability (APCD).

APCD’s initiatives include one on rural market accessibility, where select rural markets are fitted with accessible ramps and toilets, as well as free market space for persons with disabilities.

More rural market owners are opening up their spaces for PWD, said Jasper Rom, community development manager of APCD. He said he has seen a significant change in people’s attitude toward those with disabilities in the communities where he operates.

Thailand, he added, has emerged as a leader in the region in promoting and protecting disability rights. The kingdom received the International Disability Award from the Franklin D Roosevelt Institute and the World Committee on Disability in 2001 for its initiatives.

According to Sano, people with disabilities are becoming more visible and more vocal in their quest to be heard and be given their just rights — a marked departure from a time when they were hidden away from the public eye. Policy-wise, he said, some countries have moved forward in the enactment of policies, while others are catching up.

But overall, ASEAN and its member states must do much better in internalising the rights of PWDs in its development agenda and its deepening integration process. As Seree, the Thai representative to AICHR, put it, ASEAN must see to it that “a cross-cutting matter like disability rights are effectively mainstreamed in the silo structure of ASEAN … making ASEAN a real barrier-free community for our fellow citizens.” (END/Reporting ASEAN/Edited by J Son)