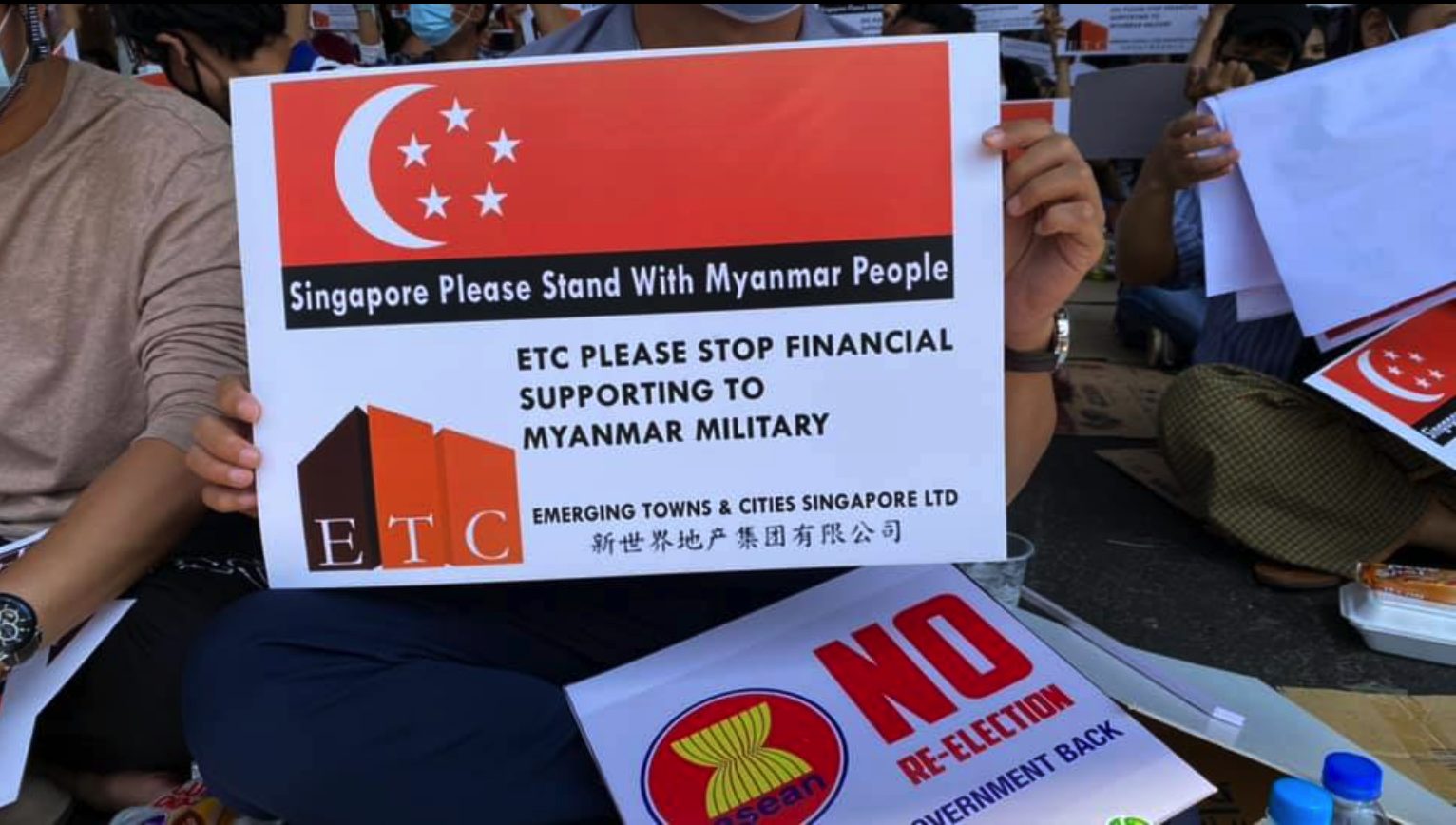 Home » Features » Anger in Myanmar, But Crisis Distant to Singaporeans

Frustration, anger and desperation have been running high among Myanmar’s anti-coup protesters who want Singapore to cut business ties with the military regime, but the country’s events remain distant news headlines for the average Singaporean.

For many in the city-state, the crisis in Myanmar, where security forces have been shooting at protesters since the military took over power in the Feb 1 coup, are far removed from their daily lives.

Asked about their impressions of Myanmar, the replies of Singaporeans from different backgrounds included descriptions such as “military state”, “unstable”, “poor” and “wasted opportunities”.

Yet Singapore, the biggest foreign investor in that country, has been in the sights of the protests and civil disobedience movement underway there for more than a month now, whether online, at street rallies, or in international campaigns by civil society groups.

“Goodbye, Singapore,” one Facebook user from Myanmar posted, sharing viral posters that listed Singapore brands that they are boycotting, such as Tiger Beer and BreadTalk, in order to press the country to take tougher economic action against the military. “Singapore isn’t representing the voices of Myanmar People. Let’s boycott Singapore products as SG is the largest investor in Myanmar,” another wrote.

While some Singaporeans are aware of the boycott, they generally do not hold strong opinions about the country or its coup, under which the military regime detained and President Win Myint and State Counsellor Aung San Suu Kyi and filed multiple legal charges against them.

Nobody around him was talking about the boycott, a matter that “does not concern me”, said Ed Lim, a 39-year-old store manager.

Mrs Law, a 71-year-old homemaker, found the boycott calls “too complicated to understand”, but said she knew that “any protest on Singapore soil will not be tolerated”. (The Singapore Police Force issued a warning on Feb 5 against plans to hold protests in Singapore in relation to the Myanmar situation.)

Clarise Ong, a 24-year-old researcher, tried to explain the apathy she sees in the people around her. “Perhaps many Singaporeans feel detached and fail to sympathise because the events in Myanmar seem to them bizarre and alien, as compared to the politically stable climate that we are accustomed to,” she said.

The supporters of the civil disobedience movement that emerged after the coup are demanding that countries that are the major economic partners of Myanmar, as well as their companies, sever all business ties that benefit the military, whose holding companies play a major part in investments and projects with foreign participation.

As Myanmar’s largest foreign investor, Singapore’s investments in 2020-21 amounted to 161,144 million US dollars, according to official Myanmar data.

“Goodbye, Singapore,” one Facebook user from Myanmar posted, sharing viral posters that listed Singapore brands that they are boycotting, in order to press the country to take tougher economic action against the military.

In recent weeks, Singaporean businesses appear to have become more wary of continuing business as usual, as the casualties in Myanmar have increased sharply since an intensified military crackdown in late February and have drawn international outrage. As of Mar 3, more than 50 people have been killed, going by United Nations figures, and nearly 1,500 people detained, said the Assistance Association for Political Prisoners Burma.

On Mar 2, Singaporean Foreign Minister Vivian Balakrishnan told the ASEAN Informal Ministerial Meeting held to discuss the Myanmar crisis: “In the current climate, foreign investors, including in Singapore, are beginning to re-evaluate their investments in Myanmar.”

This marked a shift from his Feb 16 remarks, where he said it was crucial to maintain a separation between politics and business, and let businesses make commercial and investment decisions on their own merits.

In a Feb 25 circular, which Reuters reported on in early March, the Monetary Authority of Singapore alerted financial institutions to keep an eye out for suspicious fund flows involving Myanmar, given the city-state’s position as a global financial center and trade hub. It asked them to “take appropriate measures to manage any risks” arising from their business involvements in Myanmar.

In February too, Singaporean gaming company Razer’s co-founder and director Lim Kaling announced that he will be disposing of his one-third stake in a venture that has a military holding company as a partner in a tobacco firm in Myanmar.

TRD, a Singaporean firm specialising in drones, said it will halt all business dealings with Myanmar “until a lawful society is re-established”, after groups like Justice for Myanmar circulated information about it supplying anti-drone equipment.

Justice for Myanmar has also questioned the raising of funds through the Singapore stock exchange for an investment benefitting the Myanmar military in Yangon, which triggered a discussion in the stock exchange and the company involved, Emerging Towns & Cities Singapore Ltd.

Trade-wise, Singapore does not have as high a profile as its investments in Myanmar. Myanmar was Singapore’s 34th largest trading partner in 2018, with bilateral trade amounting to 3.838 billion dollars in the fiscal year 2017-2018.

“Given the open nature of Singapore’s economy, and Myanmar’s position as a minor trading partner, the impact of the boycott on the economy is minimal,” said a lawyer working in a government-linked entity, who asked to be identified as ‘Y’.

Asked if Singapore should be more proactive in exercising its financial clout to put pressure on the Myanmar junta, the common replies were that the country “cannot force its ideas on others” and “does not get involved in local politics”.

But among the voices that favour a stronger approach is that of prominent Singaporean writer Alfian Sa’at, who said in a Facebook post on Feb 21 that calling for a separation between politics and business, would be the same as separating business and ethics. “[If you did that,] you’re essentially saying profit maximisation matters more than reducing human suffering.”

“Sometimes it feels like a problem of discourse,” he said. “Activists speak one language, and government and business speak another. Terms like ‘human rights’ and ‘civil liberties’ are lost in translation.”

But Y, the lawyer, is quick to remind that the issue may not be as straightforward as it seems. “Keeping in mind challenges posed from the COVID-19 situation, Singapore businesses must do whatever it takes for them to survive economically. A calibrated approach, as opposed to a sledgehammer approach of totally not doing business, would help,” he pointed out.

Sam Kang Li, 37, co-owner of a film production company with operations in Singapore and Vietnam, likewise has mixed feelings. “By hurting businesses, you ultimately hurt the ordinary Myanmar people who are employed by these businesses.”

There are other Singaporean links to Myanmar, including the fact Singapore is home to a sizable number of Myanmar citizens who live, study or work in the city-state. As of 2020, some 200,000 Myanmar nationals were living in Singapore, according to the country’s embassy.

These include labour migrants, whose numbers have grown since Myanmar’s political transition – now halted by the coup – a decade ago. They are often found in the construction and marine industries, as well as in domestic work.

While Singapore’s government has called for a de-escalation of the violence in Myanmar under the military’s crackdown on protests, Prime Minister Lee Hsien Loong and Balakrishnan have stated that they did not support “widespread, generalised, indiscriminate sanctions”, which would only bring the most suffering to the ordinary people in Myanmar.

Y, the lawyer agreed: “While Singapore may not be well-placed to unilaterally pressurise Myanmar, we can nonetheless be a catalyst in creating dialogue amongst ASEAN members to undertake a concerted mode of action.”