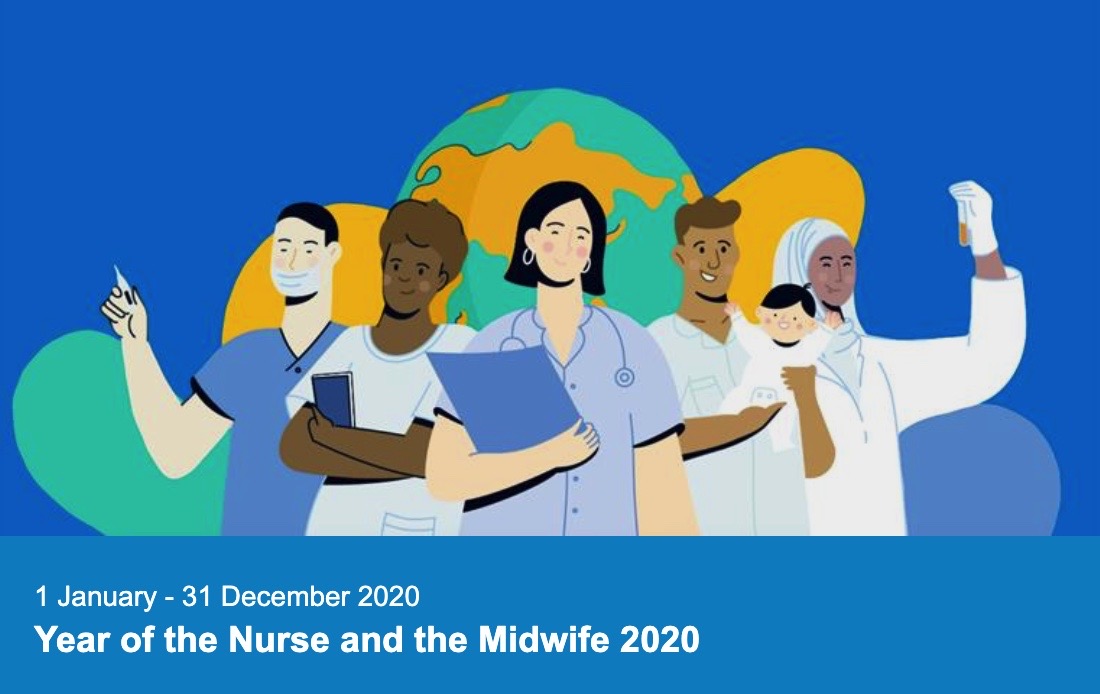 On 29 Feb, Thailand recorded the first casualty from the novel coronavirus pandemic, a 35-year-old salesman. But his death left behind another victim: a nurse who had taken care of him and developed pneumonia, which then left some lung damage after her recovery.

On 12 Mar, Indonesia reported the death of a COVID-19 patient, who turned out to be a 37-year-old female nurse who had tended to an infected patient.

In late March, a male nurse in the Philippines died of SARS-CoV-2 infection after weeks of ministering to sick patients. “An angel in the sick room has fallen,” the Philippine Nurses Association wrote in tribute to the nurse. It also called him a “warrior against COVID-19.”

Like doctors and other health care workers all over the world, nurses in Southeast Asia are bearing the brunt of the pandemic that started in Wuhan, China in late December and has now reached 179 countries and 33 territories.

As of 8 Apr, 22,073 cases of COVID-19 among medical workers from 52 countries have been reported to the World Health Organization (WHO), which believes that far more infections go unreported.

In the Philippines alone, 152 doctors and 63 nurses have tested positive for COVID-19, of whom 17 have died. In Thailand, 80 medical personnel have been infected; 16 are doctors and 36 nurses and assistant nurses.

A running tally by Medscape of health workers who have died in the outbreak places the dead at 388, including 64 nurses, as of 13 Apr. The website provides medical information and continuing education for physicians and health professionals.

“(A)ny number is too high,” International Council of Nurses chief executive Howard Catton said. “I think what it highlights clearly and tragically is that we now do have nurses who have died as a result of catching coronavirus.”

On 7 Apr, World Health Day, the WHO paid homage to the heroism and sacrifice of nurses, whom its director general, Tedros Adhanom Ghebreyesus, called “the backbone of any health system.” It unveiled the hashtag #ThanksHealthHeroes.

WHO released that day its first-ever report on the state of the world’s nursing workforce, timed 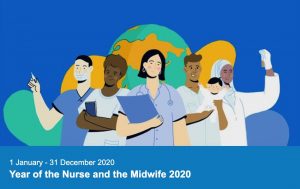 with the International Year of the Nurse and Midwife this year. The year 2020 is the 200th birth anniversary of Florence Nightingale, one of the founders of modern nursing.

The report, State of the World’s Nursing 2020, highlights how crucial the infection prevention and control (IPC) role of nurses is during outbreaks such as COVID-19, where hand hygiene, physical distancing and surface disinfection are central to containment. “Nurses are often the first provider that a patient sees in a health facility,” it said.

Their roles include triage, early recognition of life-threatening conditions, administration of drugs, performance of life-saving procedures and initiation of early referral.

The risk factors for the coronavirus infection among nurses and other health professionals are now all too known: late recognition or suspicion of COVID-19 in patients, working in a higher-risk department, longer duty hours, suboptimal adherence to IPC measures such as hand hygiene practices and lack of, or improper use of, personal protective equipment (PPE).

WHO has also identified inadequate or insufficient IPC training for respiratory pathogens, including SARS-CoV-2, and long exposure in areas in healthcare facilities where large numbers of COVID-19 patients were being cared for, as risk factors.

A nurse in Indonesia told ‘Jakarta Post’ in mid-March that the government did not bother to make it clear to medical workers back then whether or not they were treating a patient who had COVID-19.

A 20-year-old trainee nurse in Malaysia who got COVID-19 in late February had handled an infected Japanese woman without PPE, the ‘New Straits Times’ reported.

In the Philippines and Indonesia, medical workers have had to bring their own masks and protective garb or rely on improvised PPE as supplies ran low. They were beefed up only recently by purchases or donations.

Health officials also face the challenge of patients who fail to fully disclosure their travel history, exposure and symptoms, thus putting medical workers at risk. Already, the warning is out that national health systems might buckle under if too many doctors, nurses and other health workers fall ill.

WHO ELSE WILL DO IT?

Despite the dangers, nurses continue the Nightingalian legacy.

“If not us, who else will do it?” one Indonesian nurse told the ‘Jakarta Post.’ 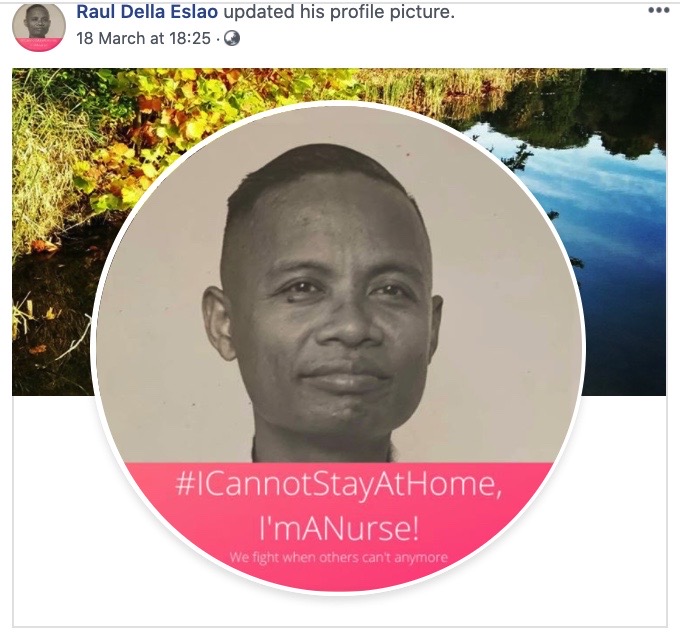 Raul. Eslao, a Filipino nurse in the US who died from COVID-19. Photo: Facebook grab

“I cannot stay at home, I’m a nurse,” Filipino nurse Raul Eslao said in the hashtag he posted 19 Mar on his Facebook account. Twelve days later, he died in Michigan, United States, where he had been working for years.

Besides their frontline job during epidemics, the ‘State of the World’s Nursing’ report underscores other challenges the nursing workforce faces in meeting the health needs of their societies, as their countries work toward the United Nations Sustainable Development Agenda for 2030.

Some challenges are common to all health occupations: adequate numbers, equitable distribution and retention, quality education, effective regulation, conducive working conditions, and quality and efficiency within universal health coverage. Others are specific to the profession: gender bias, policy leadership, regulation and varied levels of education and practice roles,

WHO estimates that the global shortage of nurses will reach 5.7 million by 2030. For Southeast Asia, available data show Indonesia facing a shortage of as many as 300,000 nurses, and Myanmar 200,000, by that year.

Nurses make up the largest occupational group in the health sector. The world’s 27.9 million nurses account for 59 percent of the health professionals.

In Southeast Asia, its 957,563 nurses make up 57 percent of the health workforce, WHO data show. In countries like Brunei and Philippines, seven in 10 health workers are nurses.

Yet the density of nurses in this region of more than 655 million people is low: 27 per 10,000 population. While countries such as Singapore, Brunei and the Philippines have densities of about 50 or more, six countries have densities falling below 15. The nursing density in Myanmar and Cambodia is only seven.

WHO estimates that the global shortage of nurses will reach 5.7 million by 2030, with countries like Indonesia likely to see the largest shortages.

While projections for Southeast Asia are incomplete, available data show Indonesia facing a shortage of as many as 300,000 nurses, and Myanmar 200,000, by that year. (Countries with no responses are not included in the charts—Ed.)

Myanmar only has 35,947 nursing professionals and sees just 2,522 people graduating from nursing schools every year. However, it has a relatively young nursing workforce compared with other countries in the region.

A tenth of the nursing workforce in nine countries in the region are 55 and older, and are expected to retire in the next 10 years, further posing a challenge in replenishment. In the Philippines, 11 percent of employed nurses are 65 and older. Timor-Leste, Vietnam and Malaysia still have nurses working in their mid-sixties, according to the WHO report.

To address the looming shortage, the WHO urges countries to increase the number of their nurse graduates and improve their capacity to hire and keep these graduates.

One approach is to address the shortage of nurse educators, as Thailand has been doing since 1994.

The Program of Higher Nursing Education Development, conducted at Chiang Mai University and funded by the China Medical Board, focuses on training masters and doctorally prepared nurse educators to teach in baccalaureate nursing programs, initially across China. The WHO report notes that the program has widened its impact across 10 countries in East and Southeast Asia, allowing nurse education programs and mutual recognition of nurse credentials across the region to expand.

Across the world, nursing is a highly gendered profession. About 90 percent of the nursing workforce is female, but few leadership positions in health are held by nurses or women, says the WHO report.

The nursing profession is male-dominated in Cambodia and Timor-Leste. Countries such as Malaysia, Myanmar, Thailand and Singapore lie at the other end, falling within or exceeding the global percentage of female nurses.

Countries also have to contend with nurse mobility and migration.

Keeping nurses in rural areas remains a universal challenge, WHO said. Then, there is the outmigration of nurses from low- to middle-income countries that have existing shortages, who head for wealthy countries that have become overreliant on foreign nurses.

The Philippines, a leading exporter of nurses, sends about 19,000 to different parts of the world every year. Some Filipino nurses have worked in countries like the US and the United Kingdom and in the Middle East for two to three decades, or are descended from migrant nurses. 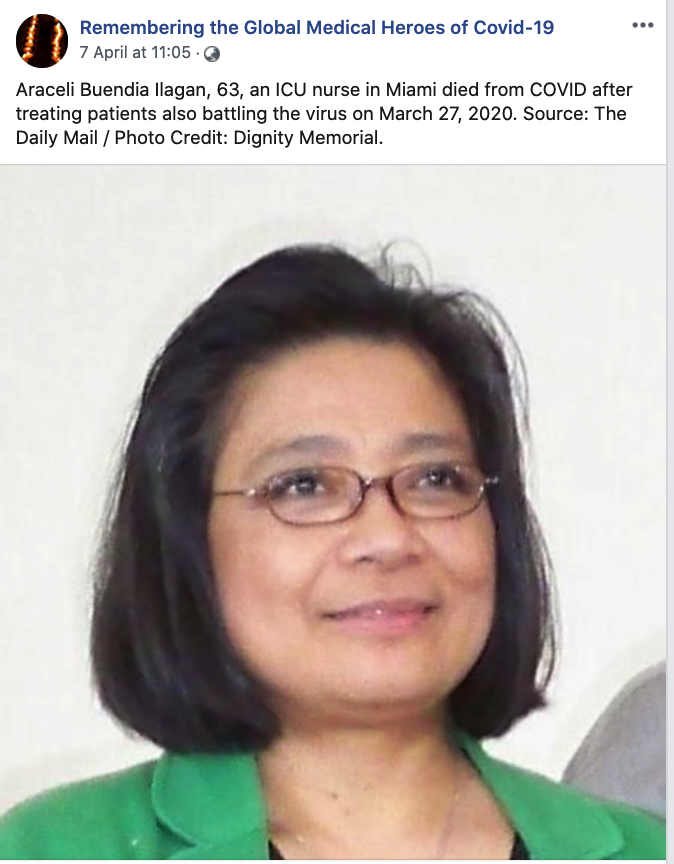 Araceli Ilagan was a nurse in the US. Photo: Facebook grab

pandemic was spreading in the US. There is also 63-year-old Araceli Buendia Ilagan, who had been a nurse manager at a Miami hospital for 33 years when she died. Donald Suelto, a Filipino nurse in the UK who took care of COVID-19 patients, died alone while in quarantine in his London home. 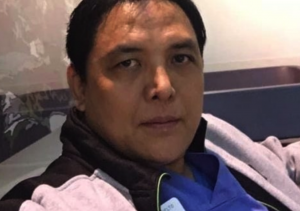 Donald Suelto worked in the UK until his death.

Facing an impending shortage of health professionals in the pandemic, the Philippines’ agency that manages overseas employment, in early April, temporarily banned the overseas deployment of nurses, doctors and 12 other types of health workers.

This stirred a debate, and discontent among nurses, in a country that has been exporting medical professionals for decades. Nurses migrate for jobs with better pay and working conditions in places with better health infrastructure, clinic or hospital resources, and education opportunities. Some destination countries include visa provisions for family petitions. For many, there is little reason to stay in their home country, where jobs are scarcer and working conditions much poorer.

On 14 Apr, the Philippine government adjusted the ban, and said medical professionals who had signed overseas contracts as of 8 Mar could leave the country.

Under a new law that granted Philippine President Duterte emergency powers, health workers who become severely ill of COVID-19 will be compensated roughly 2,000 US dollars and their families 20,000 dollars if they die. This is on top of the special risk allowance and health coverage provided by government.

Like nurses and other health professionals elsewhere, frontline workers in Southeast Asia have received an outpouring of love, admiration and support from the public. But the pandemic has also exposed the impacts of the lack of nurses and the imbalance that their migration to meet ‘market’ demands creates.

For the longer term, the WHO report urges countries dependent on migrant nurses to aim toward greater self-sufficiency by investing more in domestic production of nurses. It asks countries with excessive outmigration to improve salaries and working conditions, and create professional development opportunities to better retain their nurses.

A 2002 Philippine law sets the entry-level salary of government nurses, which now ranges from 400 to 600 US dollars a month. The private sector, which absorbs 39 percent of nurses, applies different pay scales that are not significantly higher.

Contrast that with what other countries are willing to pay Filipino nurses. In May 2019, before the pandemic broke out, Germany struck a government-to-government arrangement with the Philippines to fill vacancies for 550 Filipino nurses. Its offer: 2,000 euros or about 2,200 dollars a month.

Berlin was set to fly in 75 Filipino nurses to help it fight COVID-19 when the Manila declared the temporary ban that has since been adjusted.

*Yvonne T Chua is a journalist and associate professor at the University of the Philippines.
(END/ReportingASEAN/Edited by JSon/1504200)
‹ Previous Next ›