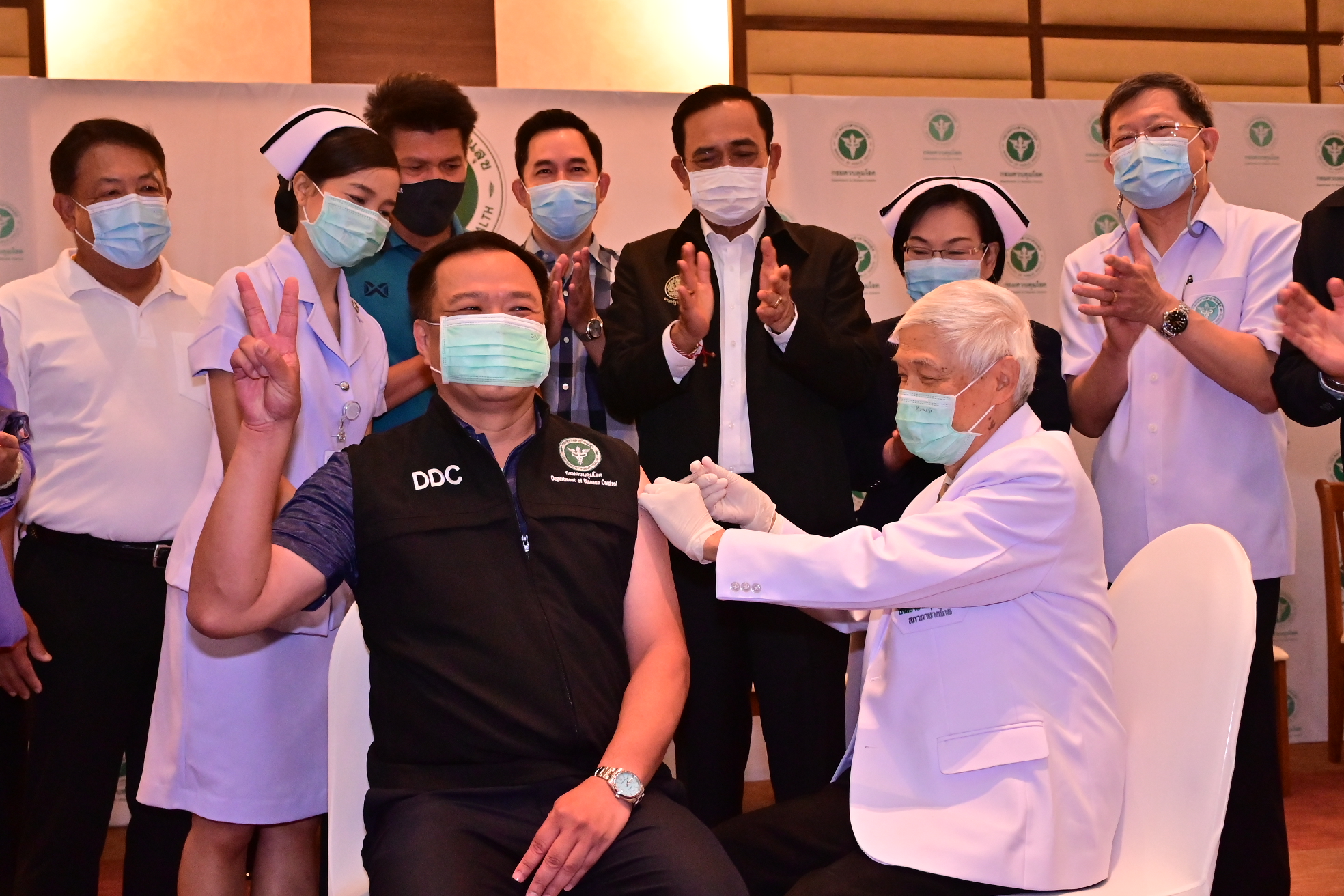 Home » COVID-19 » All Eyes on Vaccination Drive in Thailand

For a business entrepreneur like Polpat Suwanpimolkul, time is of the essence, and so is health. He sought all information needed to ensure that his family members of five will be able to get COVID-19 vaccine shots soon as they are available. “It doesn’t matter which brand, COVID-19 vaccination is crucial for not only myself and my family, but also the overall society,” he explained.

Polpat is one among the nearly 70 million Thais who are keeping a close watch on the vaccination programme in this Southeast Asian country, which started the vaccination of targeted groups in February and aims to do this on a mass scale from June onwards.

Despite reporting few infections for its population size compared to other countries, Thailand puts no less of a focus on vaccination, not least for economic recovery. If all goes according to plan, Thailand sees itself as a producer of vaccines to export to neighbouring countries as well.

All in all, Thai health officials plan to be able to use 63 million doses of COVID-19 vaccines, with 61 million from the British-Swedish pharmaceutical company AstraZeneca and 2 million from the Chinese manufacturer Sinovac.

Vaccination began on Feb 14, after Thailand received the first lot of 317,000 doses of Covid-19 vaccines from the two manufacturers – 200,000 doses are from Sinovac Biotech and the rest from AstraZeneca.

After being cleared for use by two state agencies, the Food and Drug Administration (FDA)and the Government Pharmaceutical Organisation, the first lot of vaccines is now being given to the priority groups of medical doctors, health professionals who are at high risk of contracting COVID-19, the elderly and those with chronic diseases in 13 provinces with the highest infection rates and the greatest economic significance, or both.

Under this principle, more than half of the Sinovac batch has been earmarked for Samut Sakhon province, the epicentre of Thailand’s second outbreak that has been under control since early March, and the capital Bangkok.

Subsequently, majority of the people in Thailand should be getting their shots in June to December, under the government’s plan to have everyone, from citizens to foreign residents to migrant workers, vaccinated. The government’s aim is to administer 10 million doses a month to get closer to herd immunity by end-2021, explains Sopon Iamsirithaworn, deputy permanent secretary of the Disease Control Department.

Though Thailand has earned praises for its pandemic management, its vaccine procurement strategy has not been without criticism, with questions around transparency and what some called its slow pace of securing supplies while relying almost entirely on an agreement with AstraZeneca.

Thailand plans to produce the AstraZeneca vaccine locally from June, which would include the 61 million doses it plans to use for mass immunization – sufficient to cover half of its population. Local production will be done by the Thai firm Siam Bioscience, sole distributor of this COVID-19 vaccine in the country.

Dr Nakorn Premsri, director of the National Vaccine Institute, said Thailand has been in touch with various vaccine developers and manufacturers since 2020, and also sought technological transfer as preparation for future outbreaks

He explained that in its search for viral vector vaccine co-producers, AstraZeneca selected Siam Bioscience as one of its production hubs due to standards, potential and suitability. “Unlike other companies offering purchase options, the deal with AstraZeneca means we will receive the world-class vaccine research and development technology,” he told Reporting ASEAN, adding that AstraZeneca’s technology transfer in fact started in October 2020.

So far, Siam Bioscience has produced five batches of vaccines, officials said on Mar 19. These have been sent to reference labs in the United States for safety certification, after which production should be able to proceed.

There should be 26 million doses of AstraZeneca vaccines available from June to August, and another 35 million in September-December.

Nakorn said there should be 26 million doses of AstraZeneca vaccines available from June to August, and another 35 million in September-December.

The estimated price of five US dollars for AstraZeneca’s vaccine is not expensive, he said. This includes research and raw material, the costs of which have already increased as demand rose in late 2020, he added. However, he assured, the deal rests on the ‘no profit and no loss’ principle.

Unlike most other ASEAN countries, Thailand is not in the COVID-19 Vaccines Global Access Facility (COVAX) because it is a middle-income country. This facility – Malaysia and Singapore are not eligible for it too –  aims to help lower-income nations get vaccine supplies in a market where rich countries have been getting first pick since late 2020.

However, Thai officials said in February that discussions with COVAX are ongoing about getting some vaccines through it to help ensure that the country has enough doses.

Since AstraZeneca and COVAX are different mechanisms, their pricing varies, Nakorn explained. The booking fee for the AstraZeneca vaccine is part of its price. But with COVAX, the upfront payment is just an administrative fee to ensure access once supply becomes available. Actual prices become known to countries only when the manufacturer of the vaccine they are getting is identified.

“The procurement is transparent. . . .Thai people can rest assured that Thailand has equal capability and can produce vaccines to an international quality standard,” Nakorn said at a March briefing. “We don’t need a variety of vaccines. The more important point is to vaccinate people widely to get enough coverage with a quality vaccination programme.”

On Mar 17, Thai Prime Minister Prayut Chan-ocha and the Cabinet got their AstraZeneca jabs in a well-publicized event. “I’m boosting confidence for the general public,” news reports quoted Prayut as saying.

The rollout came after Thailand pushed the event back by a few days, after several European countries suspended the use of AstraZeneca vaccines amid reports of some people getting blood clots after being inoculated.

AstraZeneca said its records showed “no evidence of an increased risk of pulmonary embolism or deep vein thrombosis” in any group, anywhere. The European Medicines Agency’s safety committee said the vaccine is not associated with an increase in the overall risk of blood clots in those who got their shots.

Prof Dr Prasit Watanapa, dean of the faculty of medicine at Siriraj Hospital of Mahidol University, said the AstraZeneca vaccines delivered to Thailand were made in Asia and not part of the batch with safety issues. “Thailand shares the opinion of the World Health Organization (WHO) concerning the use of the AstraZeneca vaccine in the elderly population that it can be safely and effectively injected in people over 65 years old,” he said.

Genetic factors are likely involved in the cases of blood clots, Prof Dr Yong Poovorawan, head of the Centre of Excellence in Clinical Virology at Chulalongkorn University, told the media, recalling that such symptoms occurred three times more often among Europeans than in Asians. Many elderly Africans and Europeans who are physically inactive can develop blood clots in veins, which then block blood supply from reaching the lungs, he added.

“We believe that genetic factors are involved in the illness, which occurs in normal life. Three million doses of the vaccine from this lot were injected. Twenty-two of the recipients developed blood clots, and one of them died. This is an incidence of seven in one million people,” Yong said.

How these shape public sentiment around vaccination remains to be seen. But those like Khanitta Soamrug say they still have some doubts over product safety, especially as COVID-19 vaccines were developed in record time. A financial consultant in her early forties, Khanitta believes she does not need to get vaccinated yet – as long it is not required for overseas travel. “It is alright to prioritise the high risk and vulnerable groups of population first,” she said.

Meantime, private hospitals and pharmaceutical firms are seeking approval from the government to import, independently, COVID-19 vaccines to meet demand from those who wish, and can afford, to get their vaccine shots soonest. Among these are the Thai unit of Bharat Biotech, an Indian vaccine producer.

(*This is part of the ‘Lens Southeast Asia’ series of Reporting ASEAN.)