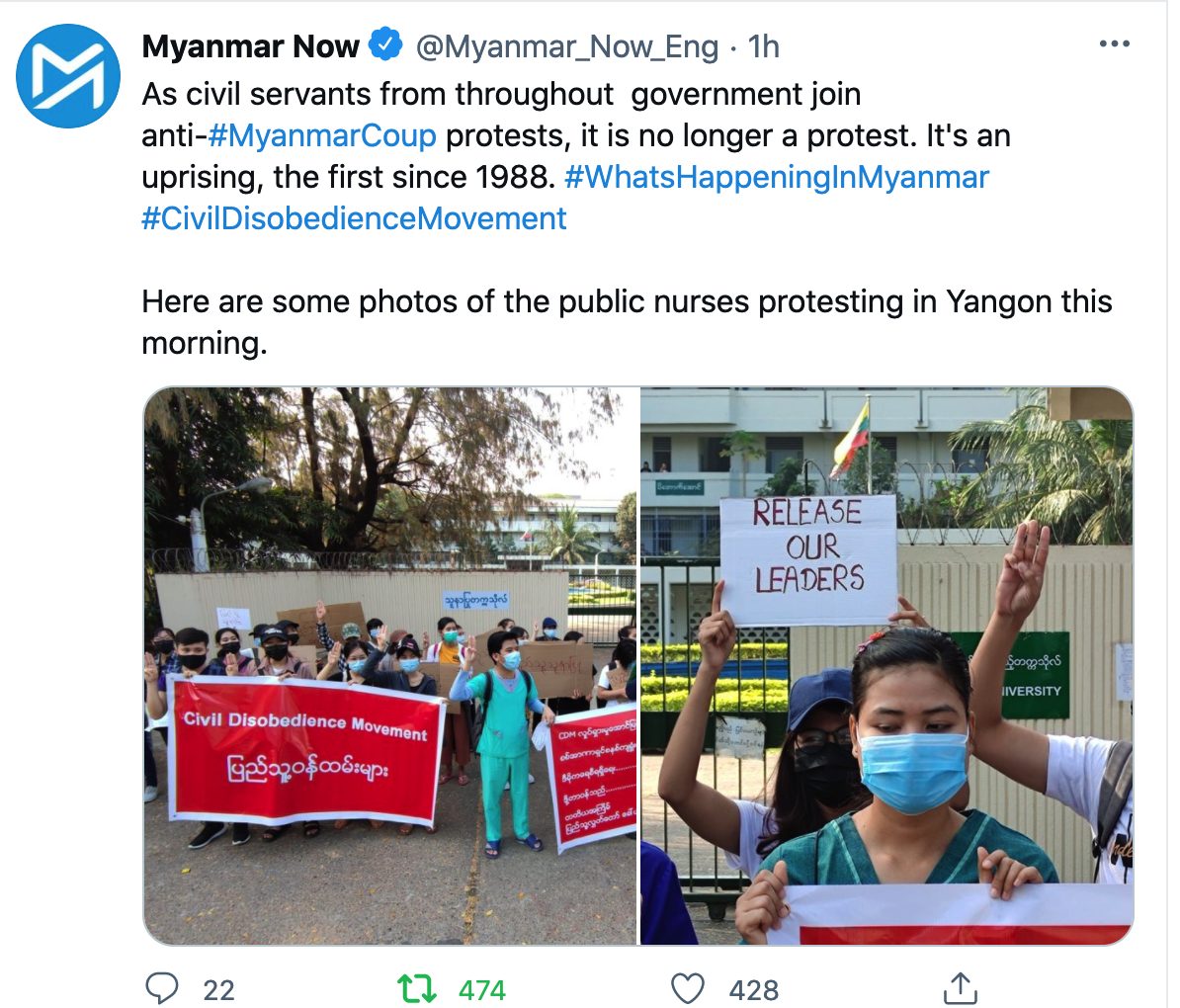 BANGKOK – “Some horrible things are likely to happen,” one journalist said. Added another: “They can arrest (us) anytime.” A reporter predicted: “There will be a darker period for us.” “I feel lost,” sighed one journalist. “We are unsafe and insecure.”

These words from various Myanmar journalists reflect the stress they have been living under since the 1 February coup by the military, which declared a one-year state of emergency in the Southeast Asian country.

Media professionals find themselves in an orbit of unknowing – about their personal futures and that of their families, about the space for the media to do their job. What will be left of this profession called journalism, which has been around for just a decade under Myanmar’s attempt at some kind of a democratic transition?

“Almost all journalists have no idea what’s going to happen next,” said one male journalist in this thirties, who follows issues around conflict that have raged since the country’s independence in 1948. “As always, the media will be the second target (after the civilian government) in the coup.”

The damage to Myanmar’s press after this coup, especially if the military goes back to holding power for years, may well be lethal in a country that has had a still-short history of independent media, and a five-decade history of military rule and authoritarianism mixed with isolationism.

Journalists agree that the message has been loud and clear from the newly created State Administration Council, whose 2 Feb statement said that “some of the media organisations and people are posting rumours on social media, releasing statements to occur riot and unstable situation”. It warned them “not to make such moves” and “to cooperate with the government”.

Since then, Myanmar’s military regime has clamped down on social media platforms Facebook, Twitter and Instagram. It ordered the internet shut down on 6 Feb, as protesters went to the streets in Yangon and other cities to protest the coup and demand the release of the country’s deposed leader Aung San Suu Kyi and President Win Myint. But the internet was back the next day, and livestreams of the continuing protests could be seen.

Already, journalists say, military and state information offices, social media and “proxy” outlets have been accusing private, independent media of publishing false information since the coup. Although there has not yet been a mass shutdown of the media, the space for journalism and open public discussion remains very tenuous.

“It (2 Feb statement) is a sign that journalists will be at high risk,” said one female journalist. “Because of the notion that we have been targetted, all of us are anxious and avoid politically sensitive posts,” added a twenty-something reporter. “The media will be the second target in a coup,” said a 30-year-old journalist who has had run-ins with the military.

That the media would be targetted in a coup d’ etat is unsurprising. But the damage to Myanmar’s press after this coup, especially if the military goes back to holding power for years, may well be lethal in a country that has had a still-short history of independent media, and a five-decade history of military rule and authoritarianism mixed with isolationism. It is a society that has yet to fully imbibe the habit of having a vibrant press.

Various groups, not least the military, still easily view the media as an enemy, or a partisan political actor, rather than as an institution whose work values lie in meeting the public’s need to understand the world around them.

“They (army) have never viewed the press as doing journalistic work and as the messengers of the public,” recalled one journalist whose work has drawn the army’s ire. “We can read their anger between the lines whenever they give press briefings, and they have very little respect toward working journalists. Sometimes, we are labelled as espionage (agents) and maggots of the country.”

Suu Kyi’s government itself was not known for protecting the space for the media, doing little to strengthen the social infrastructure for this. Under its watch, scores of journalists have been sued or convicted with the aid of laws that undermine media work.

Having to look after themselves, journalists harbor some wariness toward some institutions tasked to protect their work, worried that they could buckle under military pressure.

On 9 Feb, as security forces clamped down on protests, the Myanmar Press Council started issuing safety helmets and identification bands for the press.

On 7 Feb, the Myanmar Press Council issued a statement protesting restrictions such as the blocking of frequencies used by Mizzima News and the Democratic Voice of Burma, and the harassment of journalists, citing reporters’ accounts of having been tailed by security officers. On 4 Feb, the council released a list of steps for safety while reporting, saying “no news is more important than your life”.

Since the coup, journalists who have been covering issues such as the Rohingya, ethnic conflicts, military businesses have gone into high alert, choosing what they post and keeping lower profiles. A good number of journalists and entire newsrooms have chosen to ensure physical and digital safety first, focusing on being smart in a crisis situation.

Many, however, have gone through being harassed and sued, or served jail sentences after convictions under the Telecommunications Act and the Official Secrets Act, among others.

DOES THE PAST LIE AHEAD?

But does Myanmar’s future have to lie in its past? This question hangs heavily over the professional media in the country.

Within Myanmar, the journalism profession all but folded up before 2010, when the military started to loosen its grip. The 1962 coup led to four decades of military rule. The crackdown on the 1988 student-led uprising led to the emergence of exiled media outlets in Thailand, India, Europe and North America. Access to them had been banned from inside Myanmar. For decades, these, along with radio broadcasts from overseas, were the news sources seen as credible.

While the past sends shivers down journalists’ spines, could there be some differences this time around?

The world has changed a lot from the eighties and 2007, and even in just the last 10 years, owing to today’s digital world. Totally sealing off a country is no longer easy to do. Many in Myanmar, like many of its younger journalists, grew up with the internet – and access to the world. Fifty-two percent, or 28.7 million, of Myanmar’s more than 54 million people, use Facebook.

The military – it has a ‘Tatmadaw (army) True News’ team – clearly finds online spaces useful too. Since the coup, the information ministry’s Facebook page has carried announcements by the junta, led by Senior Gen. Min Aung Hlaing.

But as has been widely reported, the military has had more toxic uses for digital tools. Its and its allies’ use of online platforms to promote hate speech and violence led to Facebook’s banning of 20 military personnel and groups in 2018, including Gen. Min Aung Hlaing.

Still, the last decade in Myanmar’s history has given its people a precious taste of freedom, despite the uneven pace of the country’s political transition and an ill-fated set-up that tried to make bedfellows of civilian and military leaders. Myanmar’s people got a sampling, though necessarily imperfect, of how the media operates in society.

What next? One journalist said the military is likely “to dig the roots out instead of cutting the branches of a tree, which means they will mainly target publishers and the editorial team rather than individual journalists”. Of course, he added, the army can detain who it wants to.

“I don’t want to go through sleepless nights (after writing the news),” another reporter said. “They have already threatened the media, so it’s the same thing (the past) going to be repeated in some way.”

Asked about her worst fear, a journalist who used to work for exiled media said: “Going back to the Stone Age of the press censor board (shut down in 2013).”

The absence of a declared crackdown on the media does not mean normalcy, much less safety for professional journalists. The haziness of it all is, by itself, a sword of Damocles hanging over their heads. “Perhaps they will just simply let media (work) until it crosses the red line,” one mused.

Day after day, rumours swirl around who could be the army’s next target. “We will keep writing news whether it’s good or bad, that’s our obligation because people need it,” one journalist said. “If we – journalists – don’t do that, who else (will)?”

*Johanna Son is founder/editor of the Reporting ASEAN series. The names of the journalists in this story have been disclosed for their safety.