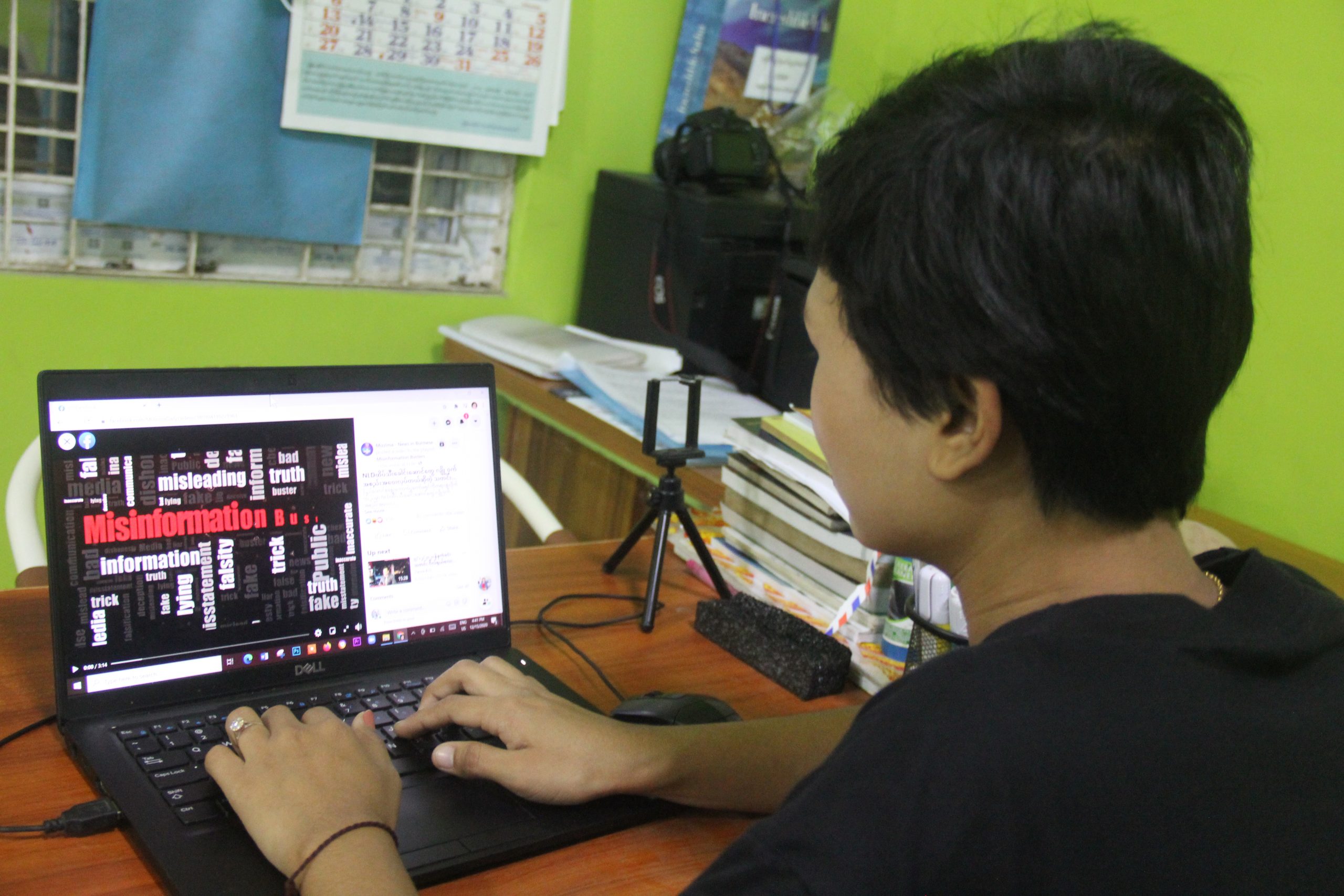 Be it false claims that drinking liquor or ginger juice will repel COVID-19, or that  eating leaves of the neem tree will protect one from it, Facebook user Pa Pa has encountered them all in the varied, virulent strains of misinformation thriving around the pandemic in Myanmar.

“Claims that eating a certain number of eggs at specific times or that citing a religious mantra can make you fully recover from the virus are common false news,” recalled Pa Pa, a 30-year-old employee who lives in Yangon.

But the strains of misinformation and disinformation in Myanmar have also been adapting to the times, four months into a major COVID-19 outbreak that picked up in August and shows little sign of easing soon in this Southeast Asian country of nearly 55 million people. Now that attention is on the use of new vaccines in North America and Europe, misinformation trends have followed this shift too.

Among the most popular hoaxes is one that says Chinese-made vaccines for COVID-19 are available in Myanmar’s border towns with China. But after cross-checking this claim she saw on Facebook with the page of Myanmar’sMinistry of Health and Sports , Pa Pa realized that it was yet another piece of false content.

A lot of vaccine-related misinformation are distortions that came from authentic news, says Nyein Chan, program manager with the Myanmar ICT Development Organization (MIDO), the earliest fact-checking group in the country and a member of the United States-based International Fact-Checking Network.

These false and misleading content are then amplified by closed, Burmese-language Facebook groups around COVID- 19 that have become efficient clusters of online liars. Each group can have from 1,000 to 9,000 members, explains Nyein Chan.

In short, the infodemic around COVID-19, a term that refers to an overload of information that is often false or unverified, is going strong nearly a year after the pandemic reached Southeast Asia. The region’s first case was reported on 13 January 2020, and Myanmar reported its first one in late March.

Myanmar reported having 115,187 confirmed COVID-19 cases as of 19 December, making it third in total numbers in Southeast Asia, after Indonesia and the Philippines. It reported 2,424 deaths, so that the country’s case fatality rate of 2.1% ranks third after Indonesia and Vietnam, and its death incidence of 4.51 (out of 100,000 people) comes third too after the Philippines’ 9.36 and Indonesia’s 7.34.

FEEDING SESAME SEEDS TO AN ELEPHANT

A year into the pandemic, fact-checkers like MIDO can give a better diagnosis of the misinformation and disinformation picture around COVID-19.

According to MIDO program manager Nyein Chan, the top five pieces of COVID-19 misinformation are claims that eating neem leaves would protect people from the virus, that flu vaccines and traditional medicine work with COVID-19, that the virus was made in a laboratory, as well as false reports about relief packages and wrong information about business tycoons’ contributions of financial and medical assistance to the government.

MIDO screens and selects about 50 pieces of news and content to do checks on daily. Each month, it also receives some 1,000 audience requests to check specific information, mostly around the pandemic, says MIDO program director Phyu Phyu Thi.

In the last five years, fact-checking activity in Myanmar has grown sizeably given the country’s challenges around disinformation, misinformation and hate speech, and lack of news and digital literacy skills amid a boom in online access and social-platform usage. These have been taking place a society that is polarized by political and ethnic tensions, as well as armed conflict, in Myanmar’s supposed transition to a more democratic society over the past decade.

In fact, misinformation, disinformation and malinformation around politics and the pandemic mixed and led to new hoaxes, including during the time leading to the November national election.

One viral hoax had it that State Counsellor Aung San Suu Kyi has COVID-19, and that the person Myanmar citizens are seeing is just a clone.

Today, there are six locally based fact-checking organizations in Myanmar. Two others, Boom Myanmar and Fact Crescendo Myanmar, are affiliated with Indian news agencies.

While some media outlets such as the independent ‘Myanmar Now’ have occasionally gone into fact-checking, most other media outlets do not do this regularly. Other fact checkers, such as civil society groups, are found outside news circles.

Myanmar needs to invest not just in cleaning up after disinformation and misinformation, but in training individuals to better spot such content as part of their schooling.

Myanmar needs  50 to 100 fact-checking groups to better address its false news problems, Toe Zaw Latt, country director for the Democratic Voice of Burma (DVB), believes. The number of Facebook users in Myanmar exceeded 27 million as of November, or about half of country’s population.

“That (number of fact-checking groups) is not enough, actually.  Twenty-seven million is a huge population on Facebook, so the fact-checking (being done now) is like feeding sesame seeds to an elephant,” DVB’s Toe Zaw Latt said, using a Burmese saying to stress how small the size of fact checking efforts are compared to the huge problem of misinformation, disinformation in Myanmar.

Until 2015, MIDO’s Real or Not website was the only local group producing fact-checking news. The civil  Think Before You Trust website, by the civil society group Burma Monitor, came in 2017.

The variety among fact-checkers and the different skills they are good at – whether they are more technology-based or more journalistically focused – can only strengthen the information network in Myanmar, Letyar Tun says.

For example, experienced fact-checkers are good at writing and debunking content, but weaker in doing verification with authorities and public figures. Media organizations can be better at verification and hunting down sources.

“Journalism and doing fact checks are heads and tails of a coin. They can’t be separated,” Letyar Tun said.

IS THERE AN AUDIENCE?

Asked how they judge the impact of their work, fact-checkers say that while they cannot cite specific surveys on whether they are making Myanmar’s audiences less prone to being misled, they believe that fact checks do contribute to improving the quality of information spaces.

The comments, shares and reactions to Facebook to MIDO’s fact checks show that stories about debunked claims are being followed, Nyein Chan says. But to draw more engagement, MIDO plans to shift from relying on text-based reporting to using audio and video presentation styles. It is collaborating with mainstream media outlets, such as DVB and Mizzima, to expand outreach.

“What we want is a significant number of ‘shares’ for debunking stories is an obligation of a citizen,” explained Leytar Tun.  But the psychology among the local community here is that they share more ‘fake news’ than (they do) debunking articles, he adds.

“Media organizations should produce more fact-check stories, like in investigative style, to draw readers and explain why they are important,” said Kyi Kyi Lwin, a former journalist based in Tarmwe township.

Fact-checkers’ work does not stop the production of misinformation and disinformation, although it does alert audiences and leads social platforms to take down some content, adds MIDO’s Phyu Phyu Thi. The bigger question of going after the systematic networks behind disinformation needs to be addressed by the big technology companies like Facebook, Youtube and Twitter, she points out.

DVB’s Toe Zaw Latt says fact checkers and the media need to pay more attention to content in video platforms like TikTok, 80% of whose users in Myanmar are youth.  In August and September, he says, DVB observed heavy cross-posting on Tik-Tok and YouTube of comics-type content that had been modified to carry hate speech.

Myanmar’s diverse language environment – it has more than 100 dialects across various ethnic areas –poses a challenge in cleaning up online channels, adds IMS’ Letyar Tun. Artificial intelligence is not always able to process Burmese-language fonts due to their lack of standardization, he says.

It is high time that Myanmar invested not just in cleaning up after disinformation and misinformation, but in training individuals to better spot such content as part of their school education.

“Media and information literacy awareness for the public is necessary. Otherwise, we will always be in second place behind false news, and exhausted in the long run,” said Phyu Phyu Thi.

DVB’s Toe Zaw Latt agrees that “the best way is adding (this skill) into the school curriculum”, but is far from confident that Myanmar’s government will take heed. As it is, he says, its National League for Democracy-led government has spent 6 billion kyat (USD 4,429,159.80) on its Social Media Monitoring Team, but has not disclosed enough information about this to the public.

Meantime, some doable ways can narrow the channels for disinformation, such as imposing age requirements for using Facebook in Myanmar. At present, all one needs to open a Facebook account is a SIM card. While an email address is generally needed for social accounts, this is not the case in Myanmar.  Facebook itself says users need to be 13 or older.

Said Toe Zaw Latt: “When I met with my (eight-year-old) niece who is now in Grade Four, she (she said) has her own Facebook account.”

Also published in the Bangkok Post here. Read in Burmese in the Development Media Group page here, and in Vietnamese here in ‘Thanh Nien’ newspaper.

(*Moe Myint is a Yangon-based journalist who has reported extensively on the Rakhine conflict and Rohingya-related issues. This feature is part of the #fighttheinfodemic series of the Reporting ASEAN programme.)