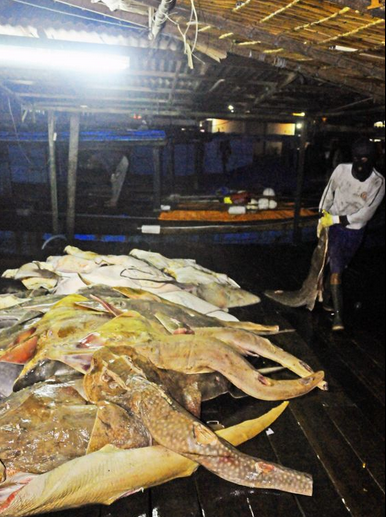 Home » Features » A Lot More Talk by ASEAN Than Action

JAKARTA, Nov 26 (IPS Asia-Pacific) – Faced with a continuing stream of foreign vessels that harvest its marine resources illegally, Indonesia has stepped up efforts to have the problem resolved at the regional level. But it is not finding it easy to push for action within ASEAN, despite all the discussions about illegal fishing among the members of the regional organisation.

Melda Kamil Ariadno, chairperson of the International Law Institute at the University of Indonesia, says that there have been a lot of discussions have been going on about illegal, unregulated, and unreported (IUU) fishing. Most of these, however, have been non-binding.

She says that at the 2010 Asia-Pacific Economic Cooperation (APEC) forum, as many as 21 countries had agreed to fight illegal fishing.  Yet these same nations have made little progress on the issue since. She also observes that Indonesia has been incessantly pushing for ASEAN countries to have action plans against illegal fishing. But she says, “So far, there has been no action. There are just some activities…but not one has been sponsored specifically by ASEAN.”

I Gede Ngurah Swajaya, Indonesia Representative in ASEAN, says combating illegal fishing is actually included in the action programme in the ASEAN Political Security Community (APSC) Blueprint that is supposed to be implemented by 2015. But it may be difficult to see this through since the issue is a sensitive one for some ASEAN member-countries. After all, they are home to many of the illegal fishers.  Here in Indonesia, many of the foreign vessels that fish illegally come mainly from South-east Asian countries such as Malaysia, Thailand, Vietnam, and the Philippines.

It is no wonder then that Ngurah Swajaya says ASEAN has not come up with a concrete agreement on how to deal with the problem, even though each member country has committed itself to fight illegal fishing. There have been exchanges as well on an initiative to establish an ASEAN mechanism focusing on the management of maritime resources, especially fisheries, but not much has come out of these either.

Ngurah Swajaya says that if the Blueprint’s action programme was “strictly applied, each country would have to monitor its fishers”. He says a nation would not only watch out for foreign vessels fishing illegally in its waters, but also ensure that its own fishers do not steal the marine resources of other countries.

He notes, “There are countries that are committed to eradicating illegal fishing yet they end up having their own fishers stealing in other countries. (All) because they did not do anything.”

Melda Kamil, for her part, goes as far as suggesting that a regional monitoring system include ‘fish certification’.  She says this is different from previous certifications that were related more to the suitability of the fish for consumption. She explains her suggestion: “If the fish (catch) does not have the proper documents, it cannot be exported and the importer-nation cannot accept it….If all countries do that, then the problem of IUU fishing will be reduced.”

Another urgent fishing talking point is the kind of equipment fishers use. Indonesian authorities and environmentalists want to see an end to bottom trawlers that rake through coral reefs and destroy these while damaging everything else they pass through. Yudi Gusworo of the Marine Resources and Fisheries (PSDKP) in Pontianak, West Kalimantan says that a trawler towed by two boats is particularly destructive.

Unfortunately, many illegal fishers seem to like using trawlers.

“Indonesia has banned the use of trawlers, but they are still in use in Vietnam,” says Bambang Nugroho, head of the PSDKP’’s Central Monitoring Station in Pontianak.  “That is why the Vietnam’s marine ecosystem has been severely damaged.” He says trawlers lead to overfishing, which is why the Vietnamese now have to look elsewhere to fish.

Nowadays,  though, talks of cooperation within ASEAN usually involve agriculture and forestry issues. Cross-border crime does not seem to attract much interest, although Indonesia encourages discussions on this.

Indonesia is now looking at the ASEAN Maritime Forum (AMF)  as one way of bringing the issue of IUU fishing – especially illegal fishing – to the regional table.

At the AMF meeting in the Philippines on Oct. 3-4, 2012, ASEAN member countries had discussed ways of increasing cooperation among in the maritime sector in line with the activities listed in the APSC Blueprint. Taken up as well were recommendations made during the forum’s previous meeting.

Overlapping territorial claims only complicate the illegal fishing problem. For example, when Malaysian fishers are caught in Indonesian waters, they often argue that they are still in Malaysian territory. There have even been instances when Malaysian authorities issued permits to Vietnamese boats to enter areas that Indonesia considers part of its territory.

While it lobbies to have ASEAN address IUU fishing, Indonesia is losing around 30 trillion rupiah a year because of illegal fishing. So far this year, 13 foreign fishing vessels were caught in West Kalimantan alone. Authorities say Natuna and Arufuru Seas, as well as North Sulawesi, are particularly popular among illegal fishers from other nations.  Yet while Indonesia needs more patrol boats in order to monitor its waters properly, the budget for sea surveillance has been reduced.

Rodolfo Severino, head of ASEAN Studies Centre in Singapore, meanwhile says that corruption plays a role in illegal fishing. Indeed, there have been suspicions that many illegal fishers escape because they are able to bribe authorities sent to catch and arrest them. In all probability, those who get away will only repeat their crime.