By By Mia Gomez and Johanna Son*

BANGKOK, Apr 14 (Reporting ASEAN) – It’s been 10 years since civil society groups in ASEAN started having annual interactions with ASEAN leaders, including face-to-face meetings at summits. But beyond making news headlines, how effective have these been in influencing ASEAN’s work or its member states’ policies?

How can engagement with ASEAN be gauged or pushed in a region where not all of the 10 member states welcome critical review of their national and ASEAN work? 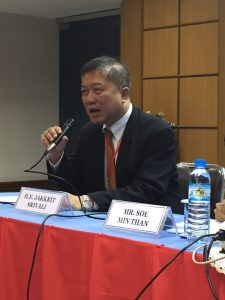 “It is instinctive that many state officials take a rather cautious view of CSOs and NGOs, tend to be quite afraid actually because in many instances they have been quite severe, quite aggressive even, in pushing forward their demands,” said senior Thai diplomat Jakkrit Srivali.

“That’s a different language from what state officials are used to,” added Jakkrit, director-general of the ASEAN affairs department at Thailand’s Ministry of Foreign Affairs. “I think it’s not impossible to have a dialogue as long as you speak the same language.”

But a decade after ASEAN leaders and sectoral bodies and NGOs started regular dialogue, they still speak different languages, even if their comfort level is much higher than before.

The fact that this year’s ASEAN Civil Society Conference/ASEAN People’s Forum (ACSC/APF), an annual event of non-government groups discussing both national and regional issues, will not be held in the host country, Laos, says a lot.

Non-government groups have decided to meet in East Timor’s capital in August, instead of Vientiane in September, saying the Lao government would not allow free, open discussion of issues. Lao officials say they did not refuse to host the parallel meeting, but that the NGO organisers sat on a final decision for too long so that it was too late to make arrangements in the end.

A stock taking of where civil society engagement of ASEAN is, after a decade, has been underway at a series of meetings ahead of the 2016 ASEAN People’s Forum, including the first one held in late March here in the Thai capital with more than 100 activists in attendance.

Discussions ranged from the progress in the dialogue with ASEAN, what new strategies CSOs can use, what the advocacy environment in member states is like, and what issues are key around this year’s ASEAN summit. Some asked how useful are the official ‘accreditation’ processes for CSOs in ASEAN and its bodies, such as the ASEAN Inter-governmental Commission on Human Rights.

At one point, Atnike Sigiro, ASEAN advocacy programme manager for FORUM-ASIA, said, “Some groups are starting to get fed up with engaging ASEAN.” But because people are the real owners of the region, CSOs need to keep pressing ASEAN. “We don’t have democratic space all over ASEAN. So whenever we can, we need to use our democratic space to fight for others, to fight together.”

TOO MUCH FOCUS ON ASEAN LEADERS
The interactions between ASEAN leaders and CSOs have varied over the years, often depending on how comfortable the host country is with NGO groups – and the presence and involvement of groups opposed to their ruling governments.

When the official dialogue at the ASEAN summits began in Kuala Lumpur in 2005, a face-to-face interaction was held between the 10 ASEAN leaders and 10 civil society representatives. Over the years, if so desired by the summit host country, some meetings have featured just one CSO person and lasted barely 15 minutes. It is not compulsory for all ASEAN leaders to sit in on these meetings. 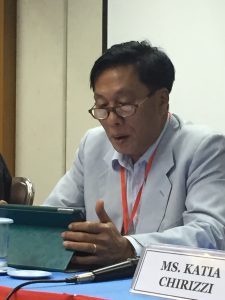 The discussions at the Bangkok consultation touched on the utility and effectiveness of high-profile meetings with ASEAN leaders, amid suggestions that opportunities for giving relevant, regular inputs into ASEAN policies were richer at the level of senior officials of ASEAN states’ foreign ministries, than at the meet-and-greet interactions with leaders once or twice a year.

“Don’t just look at the leaders’ level. You need to go down to the working level because that’s where the real work is being done,” said Jakkrit. “We could give you 30 minutes, one hour per year. But so what? It’s not that much. At the working level is where it’s at.”

“Interface is not the only way to be pro-active amongst ourselves,” explained Yong Chantalangsy, director-general of the Institute of Foreign Affairs at Laos’ Ministry of Foreign Affairs. “We have so many sectors – if we open all the sectors to consultations with our CSOs, I think it would be much more efficient than only the interface.”

Change can be effected at all levels, as long as both parties are committed to the cause, said Yong. He recounted how ASEAN leaders were convinced to address HIV/AIDS through CSOs’ advocacy with the ASEAN Secretariat.

BEHAVE, LAOS WARNS
Earlier, Yong bluntly asked CSOs organising their Dili forum to “be constructive, be positive” and bar the participation of US and foreign-based groups opposed to Laos’ ruling Communist Party. He warned that if the East Timor forum becomes a venue for criticising ASEAN chair Laos – its political system, its push for hydropower development, or the unresolved disappearance of activist Sombath Somphone – his country may oppose East Timor’s application to become an ASEAN member.

“We don’t want to have something like the Davos forum (World Economic Forum), where Davos was turned into a battlefield. We don’t want that. Be ASEAN-centred and promote the agenda of ASEAN instead of the agenda of people outside ASEAN,” Yong argued. “Be relevant to ASEAN and be respectful of ASEAN values, of the ASEAN way of doing things and ASEAN rules and procedures in engaging ASEAN.”

The Lao government was not pleased with Malaysia’s hosting of the 2015 ASEAN People’s Forum, and this explains its officials’ worry about the CSO meeting raining on its ASEAN parade. Yong referred to not wanting a “repeat” of the Kuala Lumpur forum, where the APF statement criticised Laos for “the absence of assurance of a safe space for open and constructive discussion of all issues of concerns in the region”.

Stressing the need to handle interactions with ASEAN leaders more diplomatically and strategically, Sigiro said: “We need to be strong to governments sometimes, but there are ways we need to be soft to influence (them) better.”

But other activists had different views. “Honestly, I don’t trust multi-sectoral engagement with the government. I don’t think there will be any response from the government,” said Chrek Sophea, Mekong programme officer for Focus on the Global South.

Getting consensus among CSOs on issues to put forth to governments this year was a challenge given the variety of topics from the rights of indigenous peoples, to migrant workers and women, to climate change.

“Civil society organisations have multiple agendas, different approaches and everything,” explained Altafur Rahman, executive director of Human Security Alliance. “This is not only a challenge. It is also one of potential. When you have all this debate, dialogue and discussions, sometimes you can identify which one is urgent and which one you can focus on later.”

CSOs focus on key themes agreed upon by member groups, after which they present a joint statement to leaders at ASEAN summits.

Strong on solidarity, but how about impact on ASEAN’s policies? Picture: Mia Gomez

NO FINGER-POINTING PLEASE
Yong pointedly told CSOs to think about what happens to the documents they issue, and do self-reflection about their role. “This is the year we are commemorating (a decade of) proactive engagement between CSOs and ASEAN – and where are you?”

In a more conciliatory tone, Thailand’s Jakkrit called the 2015 interaction “polite and respectful”, but said there was room to improve the ASEAN-CSO dialogue. “If we could cultivate this civil dialogue, no more finger-pointing and dragging leaders into the woodshed, that would be the beginning of a process where you build confidence levels.”

“It’s not a naturally antagonistic relationship,” he pointed out, adding that it depends on the “mode of presentation” and “the sequences in which issues are presented”. He advised: “You might start with the easier issue, then move on the the more difficult ones. “

While ASEAN processes are slow, he believes there is a way to “strike some kind of a modus vivendi between CSOs and states, to be achievable in the medium term”. Added Jakkrit: “It’s like speaking with the enemy, so to speak.” (END/IPSAP/Reporting ASEAN)

*This feature is part of the Reporting ASEAN:2015 and Beyond series.